Ban products with a criminal flavour 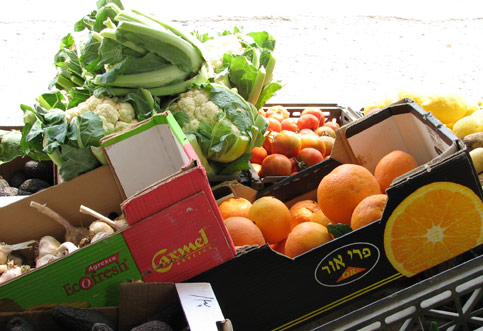 Produce from illegal settlements in the Jordan Valley (Anna Baltzer)

In the Netherlands Israeli organic grown agricultural products may be imported, since the Israeli guidelines for productions are similar to the European. According to a spokesperson of Skal, information about the producer must be mentioned in the import certificate, otherwise the product is falsely hallmarked as 'organic'.

The about 160 settlements built on confiscated Palestinian land, harbour around 450,000 Jewish settlers. International humanitarian law prohibits Israel from transferring parts of its own civilian population into occupied Palestinian territory. The International Court of Justice confirmed the illegality of the settlements in its advisory opinion of 2004. Moreover, the Court urged the international community not to support settlements nor the building of the wall.

Businesses and companies operating in the settlements contribute directly to the perpetuation of Israel's colonization. Agriculture demands relatively large tracts of stolen land and are a drain on Palestinian water resources. Settlers dig deep for water, while Palestinians are forbidden by Israeli military rule to pump deeper than nine metres. In June 2005 the Israeli ministry of agriculture announced a two-year US dollar 22 million programme to double the number of settlers in the Jordan Valley through the construction of houses and the provision of grants for agricultural development. The Jordan Valley is one of the most fertile parts of the West Bank.

The organically cultivated fruits and vegetables from the settlements taste fishy, because they are grown on stolen land with stolen water, and the profits fuel the Israeli occupation machinery.

The former Dutch Minister of Foreign Affairs, Ben Bot, wrote to the Dutch Parliament at the end of 2005, 'The Netherlands have, in a European context, laboured for good and verifiable agreements that intend to exclude settlement products, when exported to the EU, from preferential conditions associated with the EU-Israel Association Agreement. Such agreements have been in effect since 1 February 2005.' It is obvious that this should also count for the import of organic settlement products.

In an organic grocery in Amsterdam, Natuurwinkel, which has 70 locations all over Holland, a customer noticed several Israeli fruits and vegetables on the shelves. The customer asked about the exact origin of the fruits and vegetables, but the manager of Natuurwinkel could not give a clear answer. Through the Internet the name of the director and importer to the Natuurwinkel chain, Udea -- the leading Dutch wholesaler of organic and frozen products and trades with ten European countries -- was found, and in several emails clarification was requested on the origin of the Israeli organic products. But even the director of Udea could not give a clear-cut answer to whether the products originated from Israeli settlements on occupied Palestinian territory and referred back to the manager of the local shop. The customer continued her email correspondence with Udea, involving more people. This led to critical questions about the sale of Israeli organic settlement products to the Natuurwinkel and Udea. The pressure on Udea increased and the director accepted an invitation to discuss the issue. A representative of A Different Jewish Voice participated in the meeting and Palestinian organisations sent support letters for a boycott of settlement products, including Ambassador of the PLO Mission to the Netherlands Mrs. Summaya Othman Barghouthi.

Agrexco is one of the Israeli companies that exports organic vegetables and fruit to Udea. According to the director of Udea, Agrexco mixes settlement products with Israeli products, just like other Israeli exporters. He says that for this reason Agrexco cannot clarify which vegetables or fruits originate from the settlements. However, if Agrexco does not mention the origin on its organic products, it violates EU regulations. The Dutch control body Skal is very clear about the regulations and confirmed this in an email to the writers of the article. On Skal's website of customers can report doubts about EKO certified organic products, and Skal has the power to withdraw the EKO certification.

No products with a criminal flavour

Udea and Natuurwinkel know that the producer of organic products carrying the EKO logo should be verified. Organic settlement products should be banned because of their criminal flavour.