West London residents protesting about plans to expand Heathrow dramatically stopped traffic this morning outside the Department for Transport (DfT) offices in Central London before attempting an invasion of the building.

The protestors carried a bed along Marsham Street from the flat of BAA Chief Executive Stephen Nelson (1) to the Department for Transport. In the bed were two figures symbolising the close relationship between BAA and the DfT under the slogan “DfT in bed with BAA”. 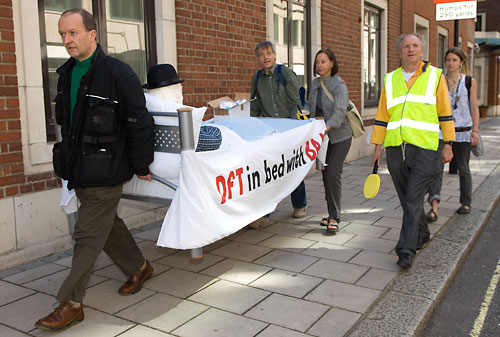 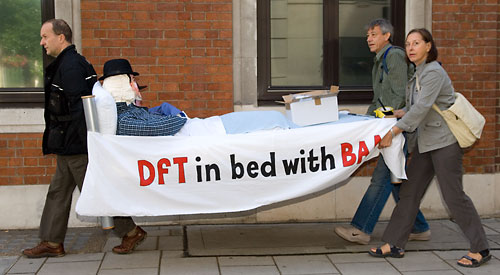 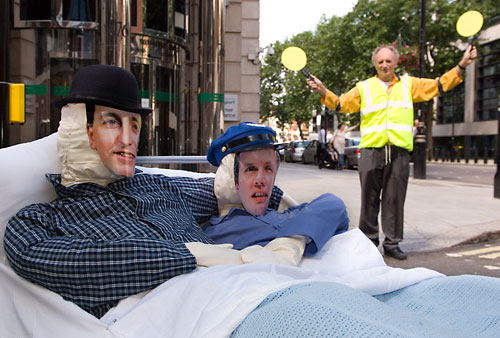 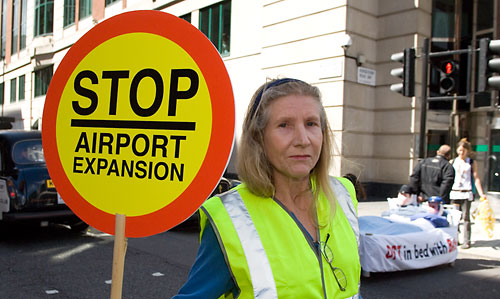 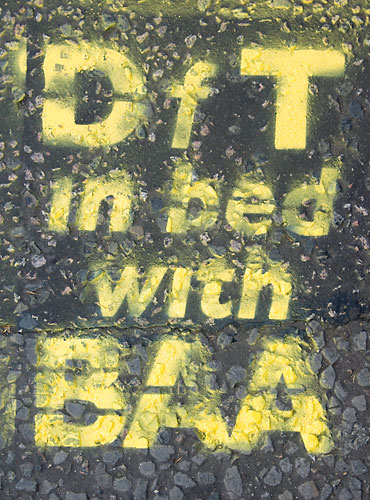 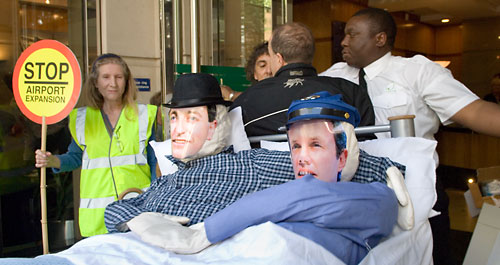 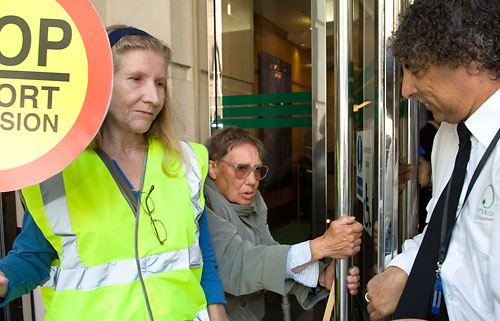 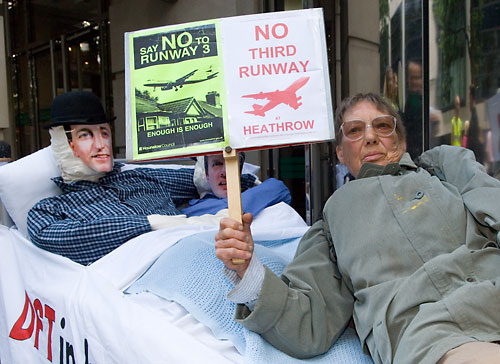 As they crossed Marsham Street a dozen residents halted the traffic when they painted a runway on the road. The residents, assisted by the direct action network Plane Stupid, then left the bed outside the DfT offices.

The action follows the revelation last week that the Department for Transport had secretly passed key information supporting expansion of Heathrow to BAA six months before it is due to be published (2).

Long-time West London resident Dr John Hunt and member of the Green Party said, “This action is to expose the unhealthily close relationship there is between BAA Ferrovial and the Department for Transport. While BAA and the Department plot and plan the expansion of Heathrow, residents and local authorities are left in the dark”.

Maggie Thorburn, a long-time West London resident, said, “Although I live under the flight path and am affected by the noise of the planes, I took part in today’s action not just because of the increased noise levels I would experience if expansion went ahead, but also because I firmly believe that any further expansion at Heathrow should be ruled out on climate change grounds.”

(1). BAA owns a flat for its Chief Executive (Flat 905, St Johns, Marsham St) about 60 yards from the Department for Transport headquarters at 76 Marsham St.

(2). Earlier this month (6th June) the Times www.timesonline.co.uk/tol/news/politics/article1890224.ece revealed that “The Department for Transport has secretly passed key information supporting the expansion to the Spanish-owned company six months before it is due to be published in a consultation document. The department has also allowed senior BAA officials to influence a series of tests designed to show whether the third runway would breach limits on air pollution and noise. The Times has learnt that BAA has a team of 34 people working with civil servants, influencing the tests so that they find in favour of building the new runway. The department has given BAA a full copy of the preliminary results but is refusing to allow any opponents of the expansion to see them. Mike Forster, BAA’s head of strategy for Heathrow, admitted at a recent conference that he had seen the results and that they were “encouraging”.” The full report is not expected to be made publicly available until just before a consultation into plans to expand Heathrow, expected in the autumn.