I don't know how it came about but the Miffy rabbit character has for a long time been associated with the EarthFirst! movement and radical ecological direct action. But do the creators and copyright owners of the character know or approve of Miffy's political activities?... 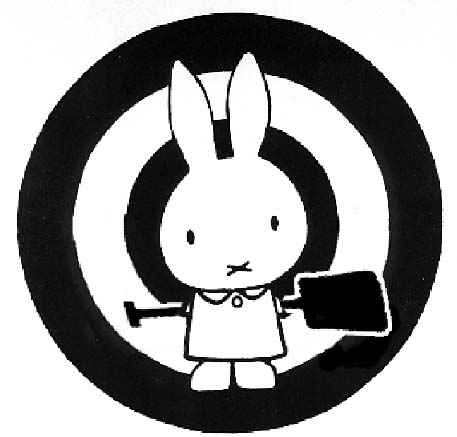 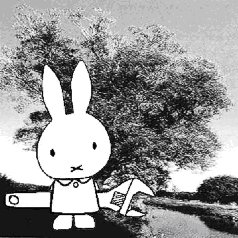 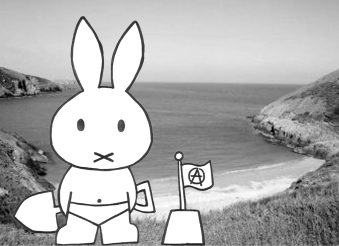 Miffy at the seaside for another EF! get together 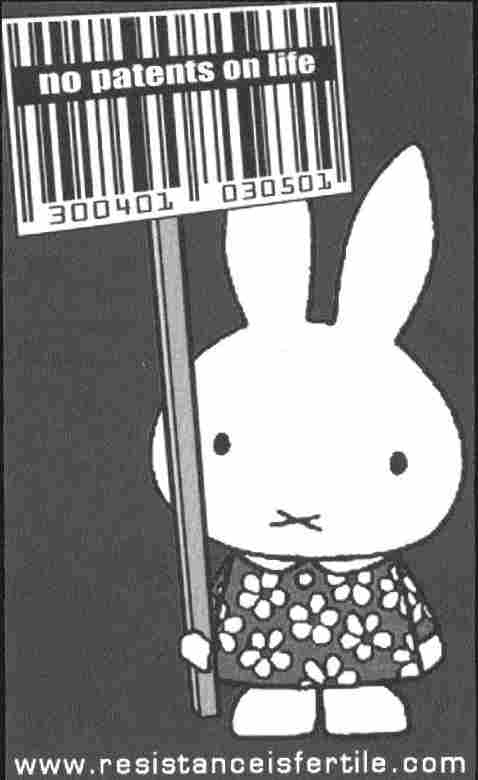 Miffy against patents (and copyright) on Life

Miffy off for a round of golf at the 2005, G8 summit in Scotland

Miffy is a picture book character created by Dick Bruna in 1955, after telling his one-year-old son Sierk stories about a rabbit they had seen on holiday. Miffy now features in about 30 titles which have been translated into 40 different languages, selling over 80 million copies all over the world.

Drawn in a very minimalist style, Miffy requires only a few lines and one or two primary colors drawn in two dimensions to be recognisable. Perhaps this, and the sense of air of innocence over mischief explains why she become involved in ecological direct action.

It's unclear exactly when exactly it began but you can trace her political activities, in this country at least, back to the early 90's and the anti-roads movement. Seen coyly holding a spanner behind her back, one could only imagine the trail of monkey wrenching she left behind her in her efforts to defend the fields, woodland and hedgerows she loved.

By the late nineties, with the roads building program in retreat, Miffy joined the growing anti GM movement, taking up a spade to join the resistance. More recently, Miffy joined her fellow protesters for a game of golf up in Scotland during the 2005 G8 summit and who know, perhaps she also took part in the blockades in Heiligendamm this year.

At over fifty years old you'd think that Miffy would be her own person, free to express her political beliefs as she sees fit but sadly it appears not. The copyright owners of all Dick Bruna's character constantly hunt down unlicensed users of her image in order to defend their profitable merchandising business.

While Miffy was created for a children's book, the design has been capitalised on to sell numerous other products like clothes, stationery, toys, glasses, household items etc. A search for Miffy products on google brings up over 100,000 pages and no doubt many of the products sold are unlicensed copies made in far eastern sweat shops.

However, Mercis, the Dutch company that owns the copyright, are not content to simply take action on those producing 'fake' merchandise, they appears to have stumbled on Miffy's radical secret life and they are not amused. They are deeply offended, ironically, by Miffys involvement in the campaign against patents on life, as depicted in sticker produced many years ago promoting the (long dead), www.resistanceisfertile.com website - copies of which can now only be found in resource archives of the (no longer maintained) Totnes Against Genetics (ToGG) website.

Mercis (www.mercis.nl) have unleashed their legal team to threaten expensive legal action against whoever might be held accountable - the inactive Totnes Genetics Group who's long unmaintained website sill contains a picture of that Miffy sticker.

While ToGG volunteers try to get long forgotten passwords and access from the internet service provider which hosts the website in order to remove the offending image, more important questions have been raised. Will Miffy tolerate this attack on her freedom of expression and will her friends in the movement stand idly by and watch as her freedom to protest is taken away?

Culture is a process of cooption 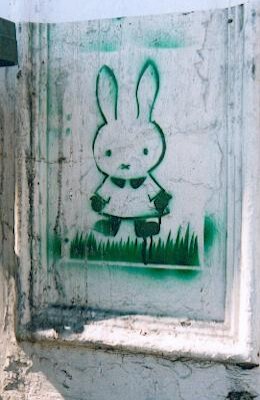 Here is another picture of Miffy which certainly is licensed. I don't know what it's meant to mean but this stencil was photographed on a wall in Bethnal Green, East London.

so maybe we should...

not the first time with EF! Miffy that they've done this - first trick of the trade - don't call your image miffy.jpg or variations on that 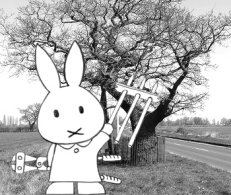 nowt else to day

for this year's gathering in July in Norfolk

yes, she was there

I'm sure I seen her in the Reddelich camp site at the German G8. She gets around. Keep it Miffy!

saw her travelling on an activist's suitcase a few years back in Australia - she gets about, her and her politics!

This is not the same rabbit, and therefore cannot be copyrighted,
As we all know rabbits only live a few years, Miffy has long passed away, these are just other rabbits that look a lot like her, not the same rabbit.
More than one of them is called miffy, but it doesn't matter, they are different, and I would like to see a court trying to dispute it, the original image might be copyrighted, but if you look closely you can spot loads of differences, in the line style, in the position of the eyes, the nose, the ears and the cloths, unless they copyrighted a circle with an X and two dotts, they don't have a legal standing (I think).
But who cares, even if they did, you could add another line in the nose, or a circle in the middle of it, the image is too simple to claim, and would still be recogniseable with little modification 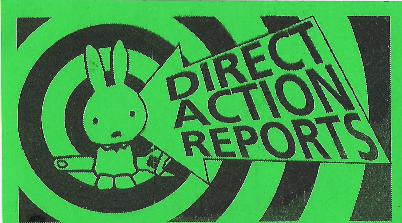 The UK contact for the shady organisation currently trying to imprison all of Miffy's children is Alicia Davenport. Drop her a line at

alicia@drilicensing.com, and maybe send her your own drawings of Miffy's children (suitably masked up of course!). They will always be free!

Bunnys have rights too

Spotted Miffy protesting against the SOCPA zones in Parliament Square so I'm certain she won't take this laying down.

hi, i just met Miffy in a meeting (she was facilitating), and says not to doubt her political actions cos it's pissing her off when people just treat her as a show-biz girl and put her politics second.

Where the new Miffys come from 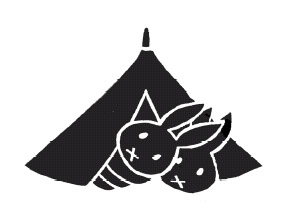 Spotted at EF! gathering last summer - we all know what rabbits do best!

maybe Miffy should start wearing a bandana, glasses and a hoody, so people stop giving her hassle!

Also, you know the scene and V for Vendetta where everyone wears the mask and gets out in the streets....maybe we should do a solidarity action for Miffy and all dress up as the mighty rabbit.

Currently there are seven comments now promoted as 'additions', probably the most I have seen. All over a cartoon rabbit drawn with a cross and a few lines. Meanwhile there are hundreds of thousands of innocents being slaughtered in 'A' and 'I' (Don't Mention the War ™).

The comment about the war is maybe true as far as it goes, but I reckon we're allowed a bit of fun too. Miffy wouldn't want it any other way - even she doesn't spend all her time on actions, as the picture of her at last year's EF! Gathering shows. (Who was that mysterious companion - I think we should be told!)

Reply to Brian B

You think indymedia contributors should only publish things that relate to the invasion of Iraq and Afghanistan?

People are dying in Sudan and Zimbabwe for example and at a comparable scale, why do you not mention them? For that mater, what about the massive slaughter of animals all over the world every day, or the rape of the planet that's unfolding by the hour? With all this serious stuff going on surely it is inexcusable for any of us to consider any other issues. Minor infringements, insults and oppression should surely be ignored while we go all out every minute of the day to put an end to war in all it's forms right now.

Perhaps, more realistically, we should do what we can, where we can, and when we can, target local as well as global issues and reflect the whole diversity of social struggles on Indymedia, the journal of 'the movement' (not just 'the anti-war' movement). 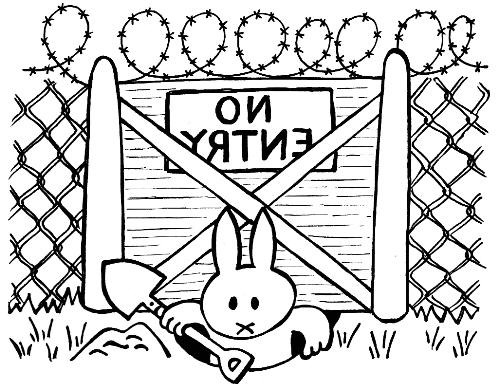 How rabbits get into military bases

I do care about Iraq and Afghanistan and everywhere else where there is conflict and where people and animals are suffering.

Here's a picture of me digging under a fence at a military establishment on my way to sabotage bombers bound for Iraq. Luckily, my presence didn't attract the same attention as that of my human friends who tried to do the same thing, which is why you haven't seen me in court.

The attempt to link me with Dick Bruna's Miffy and claim breach of copyright is just another attack on our freedom of expression. I will not hide away just because I have two ears and a cross for a mouth and bear a passing resemblance to the fictional Miffy. Some people have told me that they think all rabbits look much the same, but this isn't true at all - comments like these just betray their ignorance and prejudice about rabbits. Look at the shape of my face and the determined set of my eyes - I just don't have Miffy's innocent charm, thank goodness.

Now, can we leave this discussion and get on with some direct action?

reply to the defender of diversity

"You think indymedia contributors should only publish things that relate to the invasion of Iraq and Afghanistan?"

No I didn't even say that (even though I believe those to be the most important issues). I did not say anything against the original article nor did I say anything disagreeing with any of the comments. It was just a comment on the promotion of those comments.

"Minor infringements, insults and oppression should surely be ignored... "

If our liberties are being abused then that cannot be ignored. I believe the ability to protest near Parliament is important for example.

"Perhaps, more realistically, we should do what we can, where we can, and when we can, target local as well as global issues and reflect the whole diversity of social struggles on Indymedia, the journal of 'the movement' (not just 'the anti-war' movement)."

Yes others including yourself can choose what they want to campaign about!