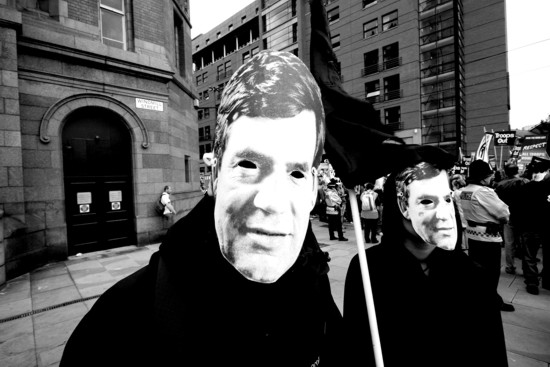 more photos of the Demo on the Manchester Stop the War website
www.mancsagainsttanks.org

There was almost no coverage of the demo - anyhwere.

There was almost no coverage of the demonstration in the mainstream media. The BBC, ITN, and Channel 5 news of Sunday 24th June all had nothing. There was a 25 second clip of some of the protesters on Channel Four news at 6.55pm on Sunday evening. Around half of all the bulletins covered Brown’s confirmation as new Labour Party leader but the voice of the people outside was not heard.

The afternoon and evening television news bulletins throughout the day added up to 115 minutes and half of all the news was of Brown’s coronation and Harman’s surprise selection as his deputy. There was less than half a minute about the protest – 0.4% of all news coverage – blink and miss it. The radio was no better – nothing on the World this Weekend or the Westminster Hour – 90 minutes between them.

I very much doubt there is anything in the Monday papers. A search of today’s Guardian and Independent websites drew a blank. I suspect the tabloids have nothing – unless Murdoch’s `Sun` has had a brainstorm.


Here is a short video clip from the Stop the war website:

I’m afraid for most people this demonstration, big though it probably was, simply did not happen.


Last year’s (I stress this is from 2006) demonstration was reported on the BBC website:


Sorry, Manchester demonstrators, you don’t seem to exist as far as our wonderful seekers after truth are concerned.

The local station, Radio Manchester said that 2000 demonstrators took part and that there were two arrests "for public order offences" a 32 year old man and a 52 year old woman. Both arrests were connected to the sit down which the stewards so disgracefully helped isolate.

Sick of the Namby Pamby STWC

I was at the sit down, yes the stewards did help the police, we wanted EVERYONE to sit down and make as much noise as possible. They helped the police divert the march around it. The march was far too quiet, hardly anyone around me joining in with chants. I'm told the STWC want the samba to stay away. The only reason this made the news at all was the two arrests, first one was totally random, second was for not getting on the pavement quickly enough.

The STWC would prefer if we all wore suits or nice frocks and whispered 'please stop the war, thankyou'. Lots of please and thankyous in the clip they have on their website. As if war is nice and polite?