A camp for families who suffer from the "Winsconsin" economic plan, is set up in Jerusalem. 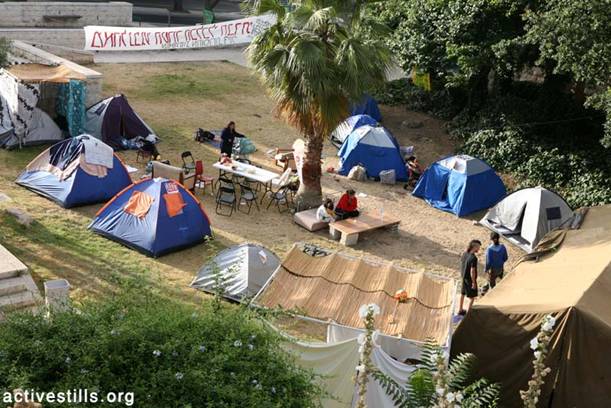 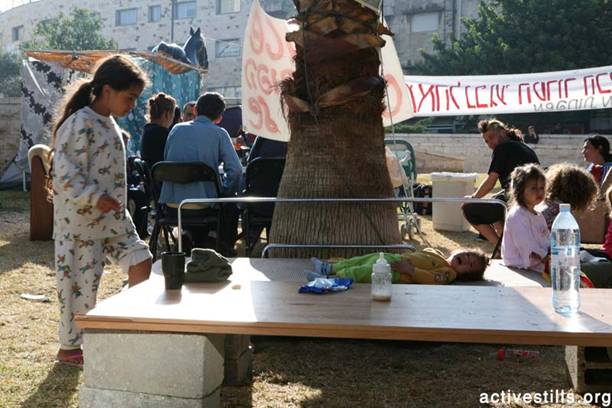 Upcoming events at the protest camp against socio-economic terrorism:

Two weeks ago a camp was set up in the heart of Jerusalem to protest against social and economic terrorism, under the Hebrew title "Victims of Socio-Economic Terrorism". The camp is inhabited by homeless families (most of which are single parent) and victims of the infamous " Wisconsin" project. Despite police approval, the City of Jerusalem has refused to permit the protest camp. The residents appealed to the Supreme Court of Justice, but were turned down. As a result, the camp is under threat of immediate eviction by city personnel. All demands made to the City of Jerusalem so far have not been met.

The protest camp against socio-economic terrorism

Invites you to the conference:

"Families of the protest camp tell their stories"

"We, women of the ' Victims of Socio-Economic Terrorism ' group, homeless families and victims of the infamous ' Wisconsin' project, have been living in the protest camp for the past two weeks. We invite you to a conference titled "The social policy – where are we heading?", with the participation of protest camp residents and social activists, to discuss the anti-social policy".

The camp, located in the "Menorah" Pit in the heart of Jerusalem, was initiated by Ayala Sabag, a long-time activist for social justice, who assembled the families to discuss further possible actions. A decision was taken to come out of the shelters, basements and staircases, and go out into the streets, parks and public spaces, to mobilise and fight for housing rights and fair employment.

We shall not give up until our demands are met!

Even if the tents are demolished, we'll continue the protest and sleep under the stars.

We don't have anywhere to go from here.

The demands are in the second post ("what are they talking about?")

For photos from the protest camp: activestills.org

"In Israel there is a growing number of families that are loosing the hope for life with dignity. Single mothers live with their children in basements, shelters, and in the streets. Workers have turned to slaves. Second generation, third, and fourth to poverty. This struggle includes resistance to all of the social wrongs - economic exploitation. Damage and sexual harrassment. The separation of millions from access to basic public services: health, residence, education and higher studies. The current struggle, a first stop in the protest camp, is organized and lead by independent women (and a few men) and has no direct contact with different social organizations. We come from different places and backgrounds, but we all live here and believe with all our hearts that is everyone's right to live in dignity. Without relation to his sex, age, origin, religion or economic situation. Although we do not represent anyone but ourselves, we have no choice left, but to begin a struggle for a more decent life, solidarity, and mutual responsibility."
We are the thousands of families waiting for public housing, we are the hundreds of thousands of children living under the poverty line, we are residents of the south and north that were neglected and abandoned for years, we are women physically and mentally assaulted permanently, we are the sick who are not lucky enough to be included in the 'medicine basket', we are disabled, weak, and the different. We are these and more, we invite you with pride, to take part with us in this struggle"

More info on the 'Wisconsin' Welfare to Work programme in Israel

Welfare to Work or Working for Welfare

Yishai gets his way with Wisconsin Plan

'Wisconsin plan is the way to economic recovery'