Anti-GM Victory : One down, One to Go!

It seems there are not often victories to celebrate so it's strange when they occur seemingly unnoticed. That's exactly what's happened regarding the news that the chemicals giant, BASF have abandoned plans for a GM potato trial in Yorkshire this year, despite government consent.

Back in April there was an action in Hedon near Hull [1 | 2 ] to demonstrate public opposition to the first GM trials in the UK proposed in three years. Taking action before the trial began, the protesters planted their own organic spuds in what they thought was the field earmarked for the GM variety [1 | 2 | 3 | 4 | 5 | 6]. The aim was to invalidate the experiment before it was even started and while it turned out that they had picked the wrong field they did successful demonstrate that public opposition to GM crops is as strong and militant as ever [audio | video].

The planting of the other trial, located in Cambridge [1 | 2], went ahead despite local opposition and protests but campaigners say that it's not too late to drive home the message that "there is still no future for GM in the UK".

There is a national call out for a 'potato picnic' announced for Sunday 1st July near the site of the Cambridge trial. [flyer | directions] 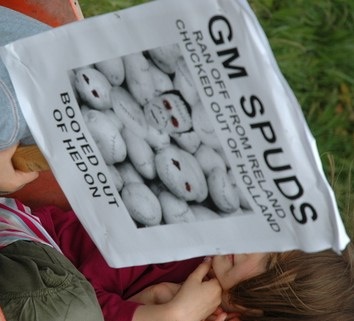 Three years ago, the British public won the battle against Genetically Modified (GM) crops being grown in the UK. The British countryside is free of GM crops, and supermarkets and food manufacturers no longer sell products containing GM ingredients.

These monumental victories were the result of a long struggle between the British public and the giant biotech companies. Resistance took many forms: leafleting supermarkets, attending rallies, lobbying farmers, food manufacturers and suppliers, pulling up crops and blockading Sainsbury’s depots as they continued to sell foods containing GM animal feed. Across the country people successfully resisted the advance of GM crops in the UK.

Unfortunately, the battle is not quite over…. 3 years on, one company is attempting to recommence GM trials in the UK.

German based chemical company, BASF, applied for government consent to grow trials of GM potatoes this year at two locations, one in Cambridge and another just outside of Hull, Yorkshire. BASF stated that the trials were designed to test whether potatoes can be genetically modified to be resistant to blight. However, given the historical context, it seems more likely their function is to test if the UK public is still resistant to GM.

"To maintain the successes achieved over the past decade, it is vital that these two trials are opposed. There is no room for complacency. If we act together now we can keep our fields GM free, but if we allow the trials go ahead unhindered, we help pave the way for commercialization of GM crops across the countryside." - mutatoes.org

Audio of interview with campaigner in cambridge

This phone interview featured in the 25th June, Indymedia Global Reports that went on on Resonance FM.