The Ford Foundation is coordinating the U.S.-Vietnam Dialogue Group on Agent Orange. The group's aim is to build a bipartisan humanitarian approach to cleaning up "Agent Orange." It says past diplomatic efforts have been difficult. 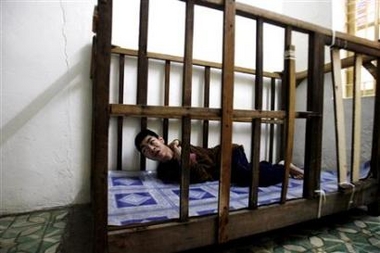 One member of the group, Todd Whitman says the time is right for the two countries to address the chemical's legacy and to bring discussion of the unresolved issue into the mainstream.

Agent Orange was used by the U.S. military to strip jungle cover in Vietnam.

The Vietnam government blames birth defects and other health problems in that country on "Agent Orange." But the U.S. government says there is no scientific link between those health issues and Agent Orange.

The Vietnam War ended in 1975. A Vietnam victims group sued 37 U.S. chemical companies that made Agent Orange, but the lawsuit was thrown out in 2005. The group is appealing the ruling.

Nhu Hong Phong, 24, lies in a wooden cot in his parents' house in Hanoi June 16, 2007. Nhu suffers from brain damage and Vietnamese doctors believe he is a victim of exposure to dioxin or 'agent orange' passed down the generations. Several major U.S. chemical companies are directly accountable for supplying the U.S. military with dioxin, or 'agent orange,' during the Vietnam War and causing widespread dioxin poisoning, a lawyer for Vietnamese plaintiffs told a federal appeals court on June 18, 2007.