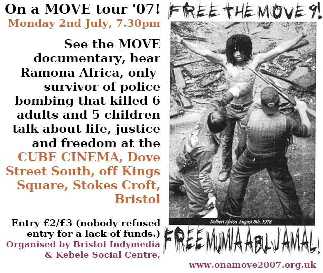 MOVE – principled environmentalist, anti-racist, pro-justice, American radical group suffering 35 years of harassment, torture & murder at the hands of the US state? Or psuedo-religious, child-abusing, crazy cult complete with god-figure and a penchant for guns, who deserve to be locked up or killed by the US state. You decide.

This months film night offers a rare opportunity to see the 2003 ‘MOVE’ documentary on the big screen. Plus an even rarer opportunity to hear from, and question, long-time MOVE member Ramona Africa.

Film Review - Like a cross between the Weather Underground and Waco: The Rules of Engagement, this compelling documentary covers the full controversial history of the radical MOVE organization. With archival footage and a clever use of still photos it captures the group evolving from protests and demonstrations into riots, barricades, and self-fortification, to the astonishingly violent police actions to stop them. From its origins in Philadelphia in the 1970’s guided by the teachings of John Africa, the MOVE story is told through interviews with actual MOVE members including Ramona Africa, the MOVE 9 prisoners and MOVE supporters, and analysed by it’s neighbours, Philadelphia journalists and others. MOVE is narrated by Howard Zinn, author of “The People’s History of the United States”.