Migaloo, the white humpback whale, is forcing the USA and Australian military forces to reconsider using the Great Barrier reef for war games. The USA and Australian Defence forces have faced down a civil disobedience peace campaign against their Talisman Sabre War Games, from June 19 to July 2, at Shoalwater Bay near Rockhampton, Queensland, Australia, only to come up against the white whale! 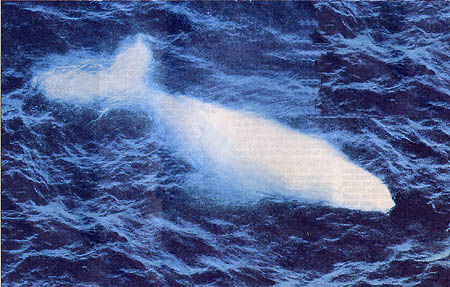 Hundreds of people protested in Brisbane and later outside the restricted area, with many attempting to enter the area, several actually succeeding and evading capture for a number of days. But still the military exercise continued, although possibly in a slightly subdued form. Now the combined military forces are facing another threat - a distinctive white humpback whale by the name of Migaloo has been sighted heading towards the exercise area, and the miltary are being forced to back off from endangering this beautiful creature.

This has forced the Military to strategically retreat. Commander Peter Lockwood from the Australian ADF was reported by the Australian Broadcasting Corporation (ABC) that special precautions have been taken to protect marine mammals, and that other sites are being considered for future exercises. "At the moment we've got all the environmental risk mitigation strategies in place and we're quite comfortable we can conduct this activity quite safely here without harming Migaloo." he said.

Nearly 30,000 US and Australian military personnel are involved in the Exercise Talisman Sabre war games at Shoalwater Bay near Rockhampton, including 120 military aircraft, tanks and 30 warships, including nuclear-powered aircraft carriers and submarines.

The white humpback whale, Migaloo, was first sighted in 1991 and is the only white humpback whale recorded, even according to whaling records (Moby Dick was reputed to be a sperm whale). Each year Migaloo migrates from its summer feeding grounds in Antarctic waters, along the east coast of Australia, to winter breeding grounds on the Great Barrier Reef. The Pacific Whale Foundation gave Migaloo his name in 1992 after consulting with Aboriginal elders in the Hervey Bay area of Queensland. 'Migaloo' means 'white fella' in the Hervey Bay aboriginal language. The name has been recently trademarked by a businessman, Brian Meldon, for its marketing use in the areas of cosmetics, clothing, animation and toys/games, to the disgust of many indigenous and non-indigenous people.

Dean Jefferys, a Filmmaker and whale/peace activist, who has just returned from a week of peace protests at Shoalwater Bay said, "Migaloo faces possible death by sonar at the Talisman Sabre war games now occurring in central Queensland".

The US nuclear submarines involved in the exercise use Low frequency active sonar. A report released by delegates at the International Whaling Commission meeting in Alaska earlier this year condemned the use of military sonar in the Great Barrier Reef marine park and its dangerous effects on whales and dolphins as part of the Talisman Sabre 07 war games.

Dean Jefferys said "Low frequency active sonar, the type used by U.S. submarines, is a known cause of whale and dolphin beachings. Scientists are so sure that active sonar kills cetaceans that they have banned the use of sonar in the oceans off Hawaii. Even the U.S. navy admit that sonar causes beachings and whale deaths. I would hate to see Migaloo the icon of the humpback migration wash ashore dead at Shoalwater Bay. This sonar is dangerous and potentially lethal to whales and all cetaceans. I am asking the US military as a matter of extreme urgency to stop all use of active sonar in this sensitive marine ecosystem."

Environmental spokesperson for the Peace Convergence Kim Stewart, said, "Sonar causes the animals to panic, surface too quickly and get “the bends”, brain hemorrhages and cause them to become disoriented and hence beach themselves. Sonar is also known to affect other species such as turtles and fish, reducing the fertility of their eggs and resonating in fish swim bladders causing internal injuries.”

“The military are telling us that sonar does not travel far from it’s source, so they can monitor the presence of cetaceans. However, active sonar can travel hundreds of kilometres, making monitoring unlikely.”

“The military are giving the public assurances that their activities in the Great Barrier Reef will not harm the environment. But the fact is, they cannot avoid it. The everyday munitions and maintainence chemicals contain contaminants including heavy metals and perchlorate and are known to harm the environment. The military’s Public Environment Report has basically ignored the concerns of environmentalists on this issue,” said Ms Stewart.

While Australian Navy officials refused to comment on the threat of military sonar to marine species, Lt. Steve Curry of the U.S. Navy's Seventh Fleet said by e-mail reported in SciTech Today that the US Navy would do everything it can to prevent whale fatalities. "The Navy is committed to the continued use of active sonar and goes to great lengths to minimize any potential effects on marine life through the use of protective measures," he wrote.

Marsha Green of the Ocean Mammal Institute, also reported in Scitech Today, said "The reality is the strandings are only the tip of the iceberg. Most of the animals that are injured are going to die and sink to the bottom."

Perhaps Migaloo the humpback whale is just repaying the efforts of Greenpeace, the Sea Shepherd Conservation Society, and the millions of people around the world who have campaigned for the protection of whales. Ironically, he could be harpooned by a Japanese whaler next southern summer (December 2007 - March 2008) when the Japanese Whaling fleet embark on the 'scientific' slaughter of 50 humpback whales in the Southern Ocean Whale Sanctuary, as well as slaughtering 900 Mincke whales.

Original article with all sources and links on Sydney Indymedia: