Make a Festival that Matters 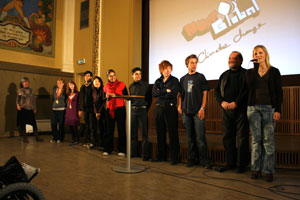 With participants, workshop leaders, and jury members coming from all corners of the globe and with a side-program focused specifically on global climate change, the festival took on a powerful international dimension for the first time in its five-year history.

During the first days of the festival the NUFF Global climate change film program was shown to local school children at Tromsø Museum and the cinema Verdensteatret (The World Theater). These free showings were offered in conjunction with World Environment Day which had the city of Tromsø as its host. Over one thousand students from different schools in town watched the films and had the chance to discuss with the filmmakers. At a special showing of the NUFF Global films the students even had the unique opportunity to discuss environmental issues with Kristin Halvorsen, the Norwegian Minister of Finance.

NUFF was also the background for the launching of a new youth film website from Tromsø’s youth culture house Tvibit. Erik Solheim, the Norwegian Minister of International Development, opened www.counteract.tv – a forum where young people from around the world can submit documentaries and stories about local political actions.

At the same time as the NUFF Global films were being shown, festival participants worked in workshop groups making short-films with group leaders Paolo Davanzo and Lisa Marr from Los Angeles, Linda Hattendorf from New York City, Susanne Stranddorf from Denmark, Mathias Glasner from Germany, and Svein Andersen from Norway. The groups had to finish their films by mid-day on Friday, June 8th – in time for the opening of NUFF/NUFF Global at Verdensteatret. Mayor of Tromsø Herman Kristoffersen gave the official welcome speech while Ida Holten Worsøe, an actress from the local professional theater, served as emcee.

The lights dimmed and one by one the five workshop groups introduced themselves and their film to a packed theater. The themes in the short-films touched on such subjects as love, loss, and personal epiphany and the fruits of less than one week of labor were impressive. The opening festivities concluded with a showing of a behind-the-scenes film produced by two local Tromsø youth. Behind-the-scenes: Ice-cold explored the environmental friendliness of the production of a climate-change inspired short-film called Ice-cold.

During the final Saturday and Sunday, both the NUFF and NUFF Global film programs were shown throughout the day at Verdensteatret. This was the first time many of the young filmmakers got the chance to see their own film on the big screen or to see the films of their fellow NUFF participants. Anticipation and excitement lingered in the air! Meanwhile, the six jury members had arrived in Tromsø and assumed the task of selecting the best films in a variety of categories. The NUFF jury was made up of Pontus Hummelman from Denmark, Maria Ekerhovd from Norway, and Daniel Alegi from Sweden. The NUFF Global jury was comprised of Nina Dessau, Henning Rosenlund, and Nina Denney Ness, all from Norway.

After viewing all of the NUFF and NUFF Global competition films, the juries made the following selections:


The prize winners received a green leaf glass statuette made by Blåst Glasshytte in Tromsø.

The closing award ceremony was held on Sunday night at Verdensteatret. The winners were announced and clips from each of the winning films were shown. After a busy and successful week the tired crowd headed back to base-camp at Tvibit for refreshments, reflection, and revelry over what had been a truly inspirational and empowering festival for all involved. Networks have been established and international connections have been made that will surely play a role not only in NUFF and NUFF Global in the future, but also in new and exciting projects and plans to come.

And the future is already upon us! The festival aspects of NUFF and NUFF Global may have officially ended on June 10th, but the spirit lives on. All 15 NUFF Global films are being compiled onto a DVD and will be shown at various festivals and events around the globe. In addition, a special DVD of NUFF Global films will be distributed to a number of cities in Norway and can be ordered for further distribution through the NUFF websites (www.nuff.no and www.nuffglobal.net). We truly believe in the NUFF Global motto of “make a movie that matters” and are confident that the films in this program have the power to do just that. They are cinematographic testimonies of the devastating changes happening to our world and in the case of these films, pictures do speak louder than words.

We would like to extend a heartfelt thanks to the Global Ambassadors, the film idea jury and supporters of NUFF and NUFF Global. The festival and its impending impact have been and will be tremendous. We are already looking forward with anticipation and excitement to next year and the differences that can be made!
Thank you for being a part of it all!

All the best
Hermann