Uganda and Foreign Gays in danger!!

A uganda main stream "independent" Monitor news paper, that is owned by the Agakhan has called for Vigilance against Gay People in it' Editorial section.
This is a very serious and dangerous thing!!!!!!

"We appeal to our religious and cultural leaders -- in addition to school matrons and teachers -- to enhance the fight against the immoral agenda espoused by gay activists who are in and outside Uganda. Their orientation must not be allowed to take root in our society as is the case in some countries. The custodians of our laws; the police and the courts of law should therefore be vigilant." 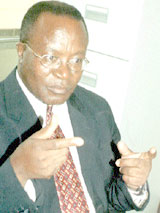 in Its Sunday Editorial section, the News paper has written;

Do not yield to gay demands

In our Friday issue, Ethics minister James Nsaba Buturo was reported to have complained that he was being threatened by homosexuals (See, Homos Want To Kill Me - Minister).

These brothers and sisters, who definitely have perverted minds, are constantly sending hate mail and death threats to Dr Buturo. Most of the emails emanated from gays and lesbians in the United Kingdom and the United States of America.

They want the minister to drop his campaign against their sexual orientation! Or to put it better, to nip in the bud their reprehensible agenda of propagating their 'culture' among our school-going youths, and to demand 'recognition' in Uganda.

The head of sexual minorities, Uganda, Ms Juliet Victor Mukasa, is quoted to have said that Dr Buturo was a stumbling block in their quest for gay rights!
For heaven's sake, their sexual orientation is not in consonance with the law in Uganda. Period. And neither is it in tandem with various religions or numerous Ugandan societal norms; the moral code in more than 50 ethnic groups.

And here is another premise for the need to expunge their arguments and demands. The western world is wont to lecture to the second and third world(s) on the need to respect the rule of law. Well, the current legal regime in Uganda dictates that homosexuality is not acceptable. One therefore wonders why these men and women in the UK and the USA would want to break the law in Uganda.

Thirdly, it is arrogance of the highest degree for them to seek to swamp Uganda and the third world with their decadence. Granted, we have been swamped with pop culture, sports, education, technology, etc, but we as a country have a right to filter the chaff from the grain; we are not duty bound to accept whatever information or lifestyle that is dangled before us, just because we are a poor lot who still depend on bilateral and multi-lateral assistance to bridge deficits in our [national] recurrent and development budget(s).

We appeal to our religious and cultural leaders -- in addition to school matrons and teachers -- to enhance the fight against the immoral agenda espoused by gay activists who are in and outside Uganda. Their orientation must not be allowed to take root in our society as is the case in some countries. The custodians of our laws; the police and the courts of law should therefore be vigilant."
This is not the first time a news paper in Uganda has acted in such a dangerous way, this might turn into a Genocide of Gays and Lesbians!!!!