Over 95% of postal workers were taken part in strike action across the UK.

“The strength of support today has proven that postal workers are resolutely determined to fight against cuts in the public service, against job cuts and for decent basic pay”.

The Union has again today reiterated their call on Royal Mail to negotiate seriously with the union on pay and dealing with major change and modernisation.

“We have seven days with no strikes and this is a window of opportunity for the company to come and negotiate seriously. We urge them to take it”, said Dave Ward, Deputy General Secretary

The Unions Executive is meeting Tuesday to consider the next steps. If Royal Mail continue to refuse to negotiate, this is likely to see the announcement of further strike action. 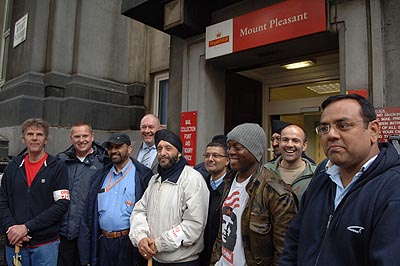 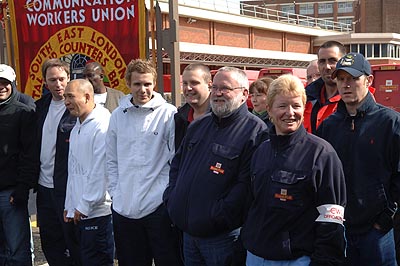 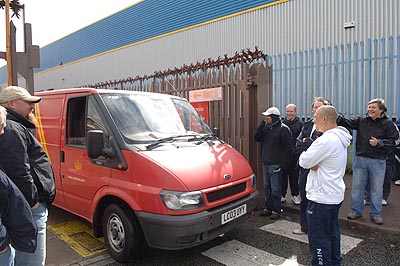 Van driven by manager for the benefit of the media attempts to leave OKR depot. 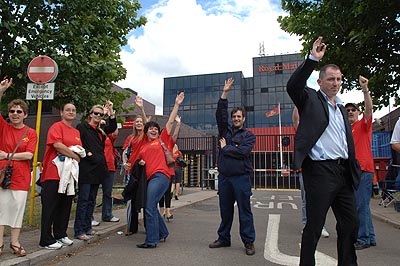 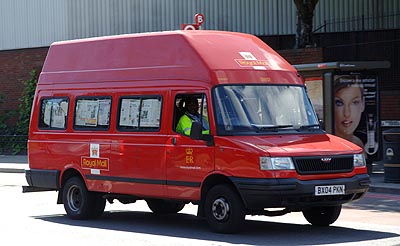 At Mount Pleasant the biggest sorting office in London the media are out in force. So for the benefit of the cameras Royal Mail managers are moving items in and out of the depot to make it look like the strike is faltering. The reality is that all of the shop floor staff (over 1,000) are on strike and the only mail being shifted by the scab managers is the special delivery stuff which is a tiny percentage of the business.

At the Old Kent road depot, around thirty workers are picketing the gate and the mood is upbeat. Shortly after myself and another journo arrive a manger drives out in one of the unused vans. His path is temporarily blocked by the picketers who mercilessly take the piss out of him. It seems that every time the media have showed up here today a manager has taken one of the vans for a spin to give the impression that things are still running. Even the security guard is laughing at him.

At Nine Elms the strike is equally solid. This morning over 40 were on the gates. Every now and again a van drives past with its windows blacked out with pages of today's Evening Standard. 'Thats the scab van' one of the stewards tells me. Managers here had told staff that transport would be provided from the local stations so they would not have to walk through the picket lines. The strikers are fairly well convinced that the van is empty and just being driven past on a regular basis to lower morale. They think this because the timing of the drive bys is just not consistant with how long it would take to pick scab labour up from the nearby station. Walking back to Vauxhall we see the afformentioned van parked up by garage. The driver is reading the paper and the seats behind are empty. He drives off when he sees us filming through the gaps in the windows. We phone the pickets to tell them they were right. Another failed attempt at spin by desparate Royal Mail bosses who are now realising that they have a real fight on their hands.