The controversial feature film documentary Your Mommy Kills Animals sold out before the Fantasia Film Festival opens next week forcing it to add more screenings. Critics have stated that this film will outcontroversy Michael Moore's Sicko this summer and is a 'must see'. 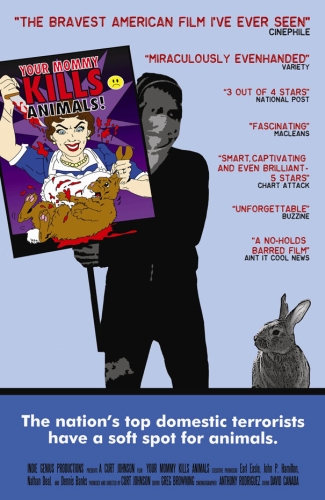 MONTREAL – Fantasia Film Festival’s Program director Mitch Davis has had to add an additional screening for the highly controversial feature film documentary “Your Mommy Kills Animals” after advance word of mouth showed that the first screening will be sold out immediately. “This is a very important film and it’s great to have to add screenings before the festival starts,” Davis commented.

Davis invited the film to Fantasia after seeing it’s sold out screenings at the Hot Docs film festival this past April and drawing rave reviews from Variety, National Post and Macleans.

Your Mommy Kills Animals is an in-depth look at the animal-rights movement, and the FBI's recent declaration calling activists the number-one domestic terrorism threat to the United States. The film hits theaters in North America July 20, 2007 and Canada in August.

Reaching out to both Internet-savvy and grassroots audiences, producer/director Curt Johnson has created an aggressive marketing campaign using MySpace, working with activist organizations to do sneak-peek screenings in major cities, and creating a music video to promote his film that has been viewed by over 100,000. A ringtone from the Your Mommy Kills Animals title track written by Saturday Night Live's Greg Scarnici has had over 200,000 downloads in its first week proving rabid demand for an unvarnished look at both a movement and a moment in American policing priorities.

Johnson's previous films include Thoth (2002 Academy Award -winning documentary) and the upcoming Pets On Your Plate. The "Your Mommy Kills Animals" music video and theatrical trailer can be seen on the film's website:

THE FILM'S THEATRICAL TRAILER AND MUSIC VIDEO ARE AVAILABLE FOR MEDIA