Not entirely successful action against genetically modified potato crop. Well the picnic right next to the site was successful but the crop remains intact and is nearly ready for lifting.

Video of injunction being read out. Sorry about wind roar - video/x-ms-wmv 1.9M 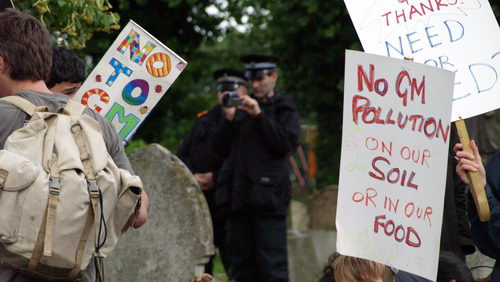 Menace in the graveyard at the start point 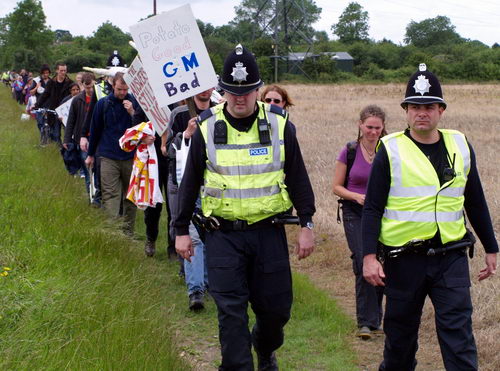 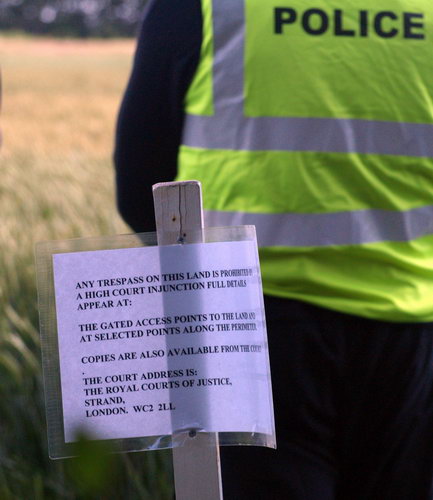 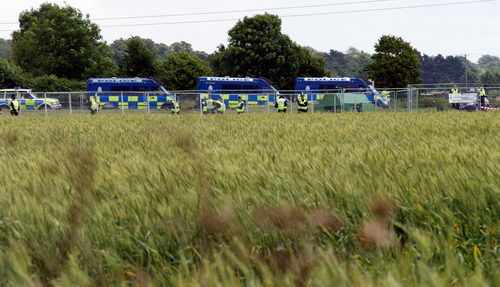 The target site in the distance 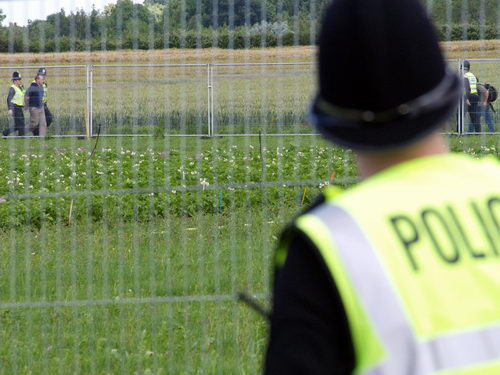 The first arrest on the test site 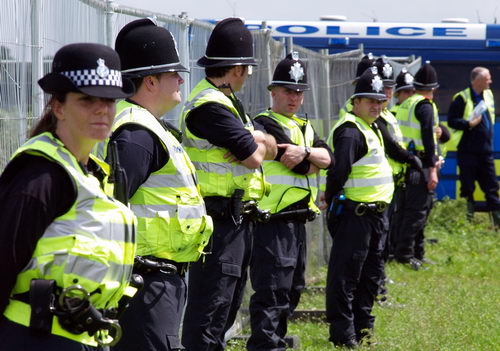 Hard to penetrate this lot 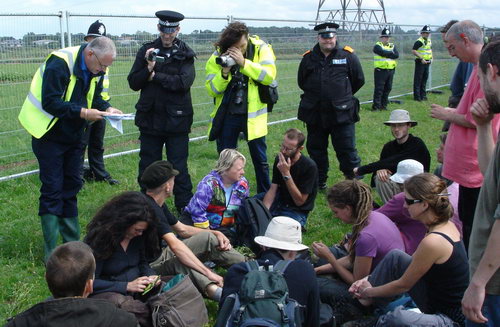 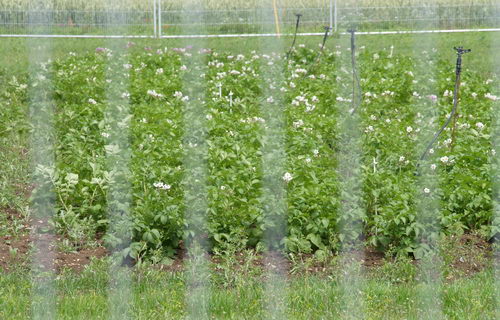 Close up of GM crop. Note the potato flowers 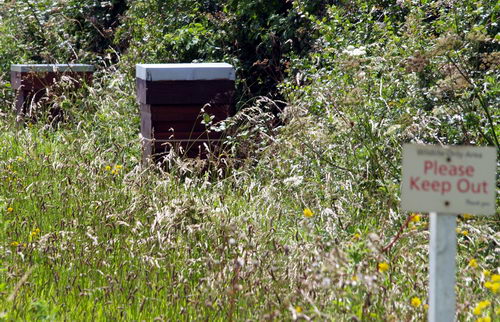 Hives about 300 metres (as the bee flys) from crop 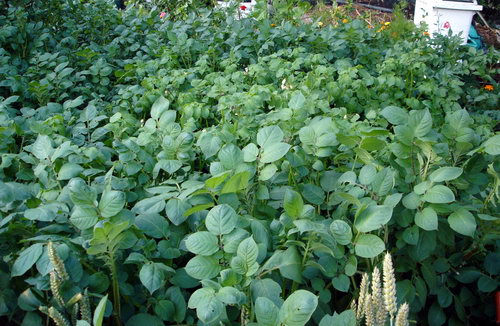 My own organic crop growing strongly 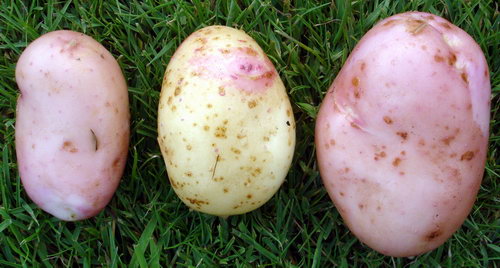 Just the pictures tonight. Am too tired to write any text so will try to upload tomorrow.

Full write up of protest and some background

One knew right from arriving at the start point of this protest in Girton that the police were going to be totally in control. Protesters were greatly outnumbered. Also there were no mainstream journalists present at all. There were lines of police photographers with big cameras and long lenses positioned all around the centre of the village. This was clearly a way of warning any locals who might wish to become involved that they would be treated as potential criminals even though it was a very fluffy protest. Protesters set off along the road, turned off onto a public footpath towards the site, escorted and watched all the way by dozens of police on foot and in vehicles. Police made a token attempt to stop everyone from leaving the footpath but the determined protesters quickly nipped through a gap in the hedge and straight onto the corporate land that was allegedly protected by a hurriedly obtained injunction. From there, one could see the test plot in the distance across corn fields with many expensive police 4X4s surrounding it. Protesters then walked carefully along the headlands so as not to be accused of damaging the adjoining (hopefully non GM) wheat and barley crops and then settled down to picnic right next to the block and mesh fence that had only just been erected around the potato test site. Many of the picnicers lunch boxes seemed to contain potato salad! One very brave protester managed to leap over this fence when most of the yellow jackets were distracted but was immediately arrested. A little while later a very polite man from Chubb security came to announce that an injunction had been obtained and that everyone was within the injuncted area and that he would be very greatful if everyone were to leave soon. After conferring amongst themselves, protesters realised that because they were so outnumbered by both police and private security guards and because a six foot fence stood between them and the much despised crop, the protest could only be a symbolic one and so they upped and left.

The pupose of this genetically modified crop trial is allegedly to evaluate the resistance of a new GM potato variety to late blight in the field. I really cannot see why this experiment has to be done in the open countryside rather than inside a closed laboratory. Blight needs particular conditions of temperature, humidity and air circulation in order to strike. These conditions would be easy to simulate in a large climatically controlled greenhouse but out in a field, the correct conditions may not be achieved from one year to the next despite the fossil fuel corporation's best/worst attempts to change our climate. Not only that but the growing potatoes were visibly in flower, therefore producing GM pollen and I did indeed see at least two bee hives presumably installed and maintained by BASF about 300 metres away near the hedge. Since it would be easily possible to pinch out the GM pollen producing flowers on such a small plot (doing this actually INCREASES potato yield by about 15%) and since the flowers hadn't been removed, one has to conclude that BASF deliberately want to spread GM pollen around Cambridgeshire as part of their open-air experiment. Pity any local honey producers as they could lose their organic status over this. I'm wondering if BASF have any monitoring hives 3km away rather than just 300m as bees can easily travel this distance in search of flowers or maybe BASF don't want to know such a fact?

Being a keen potato fancier and grower, I have a particular interest in this blight issue. Potato late blight is a particularly devastating fungus that spreads faster than any other plant disease.

http://en.wikipedia.org/wiki/Potato_blight
This is the same disease that caused the famous 1845 Irish potato famine that claimed a million lives. (In fact it would be more accurate to say that the British governement caused the deaths by completely ignoring the famine and suffering that they knew was occurring.) Blight, being a fungus, thrives in warm damp still weather. Last year's very wet early autumn weather caused my own potato crop to dramatically succumb to blight in just two days. In that short period, the foliage changed from healthy green to a black putrefying slime and the only remedy at that stage is to attempt to remove every scrap of infected material from the soil, lift all the tubers from the ground and dry the intact ones as quickly as possible before storing them. It's not over then - one has to frequently check the stored potatoes for months and pull out the considerable number that continue to go putrid before the tuber blight spreads to the entire sack. As a rule, fungal diseases can only be controlled by spraying with quite strong chemicals. The only permitted (just) organic control is Bordeaux mixture - copper sulphate and lime. This is only moderately effective - rather useless under severe conditions like last year as, since copper suphate is soluble, it has to be reapplied after each heavy rain by which time, the disease may have become unstoppable. So you can see that inorganic potato growing can require strong chemicals and organic growing is really quite problematic. In these days of unstable weather, my overriding criterium for choosing potato varieties to grow now is no longer flavour or outrageous colour but blight resistance. I would truly love a 100% blight resistant potato to grow myself. However I cannot see myself trusting an injunction wielding GM corporation's creation any further than I could throw that entire corporation uphill. As I see it their overriding interest is not to help struggling farmers or alleviate world famine. It is profit and the wish to monoplise and dominate the potato seed market with just a very few expensive patented-up-to-the-hilt varieties.

If you go to the supermarkets, you'll see on display just six or so varieties of potatoes. In fact worldwide there are an amazing 5000 different varieties, 800 or so varieties in this country and about 150 of these are easily available commercial seed varieties. The consequences of any market dominating GM variety could cause the gradual extinction of many irreplacable heritage varieties. Being brutally honest, the few heritage varieties that I've tried growing myself have been too susceptible to blight for me to continue to grow them organically. However tucked in amongst all those thousands of varieties there could be some almost forgotten about ones that have naturally high resistance. Not only that but this huge repository of varieties can be used in traditional selective breeding programs to produce new non GM varieties that have much higher resistance. This year I am trying Sárpo Mira, Sárpo Axona and Verity which are all new varieties recently created in just this way and that are claimed to have exceptional resistance. So the point I am making is that there are clear and hopefully viable alternatives to genetic manipulation without the risks.