The media and the bombings

The media coverage of the botched terrorist attacks in London and Scotland has been much as you might expect.

Yesterday we had BBC News 24 reporting that the police had stated that none of the suspects was of British origin – and then broadcasting a piece suggesting that the attacks had been carried out by young British Muslims who had been radicalised by the internet and then travelled to Pakistan to be trained as terrorists.

And nobody seems to have picked up on the contradiction of claiming that the attacks were carried out or inspired by Al Qaida, while at the same time finding guilty before trial (see the Daily Mail front page, left) a doctor reportedly of Iranian origin who is presumably a Shia.

Needless to say, right-wing (and liberal) commentators have been eager to pin responsibility on the Muslim community for failing to stop the bombers – who for all we know may in fact have had no connection with any section of the UK Muslim community. An article by Philip Johnston in the Telegraph carries the headline "We need Muslims to do more", while the London Evening Standard goes with "Muslims must reject extremism", asserting that "many Muslim leaders drag their feet". Over at the Independent, in an article entitled "Sane, ordinary Muslims must stand up and be counted", Yasmin Alibhai-Brown gives a boost to the tiny and irrelevant British Muslims for Secular Democracy and welcomes the government's sidelining of the Muslim Council of Britain, which she describes as an "apologist" for the "killing brigades".

Leo McKinstry in the Express rants that "British Muslims must show which side they are on", complaining bitterly that "Alex Salmond claimed that 'individuals, not communities' were responsible for terrorism, a piece of nonsense given that it is the Muslim community that has bred these terrorists. In London, Mayor Ken Livingstone was even more reprehensible. He dismissed the idea of any connection between Islam and terrorism, claiming that: 'Muslims are less likely to support the use of violence for political ends than non-Muslims'. Yeah, right, tell that to the relatives of those killed in the July bombings, or the Twin Towers, or the Bali attacks or the Madrid massacre."

Mad Mel in the Mail calls for a ban on Hizb ut-Tahrir (who have in fact publicly opposed the attacks) and goes on to assert that "while most British Muslims say they would have no truck with terrorism or violence, an insupportable number of them do endorse appalling ideas". Mel has an explanation for this state of affairs: "Our [sic] Muslim community is particularly vulnerable to Islamist extremism because of the collapse of Britain's belief in itself and the corresponding rise of multiculturalism and minority rights."

An editorial in the Express headed "We should abandon failed policy of multiculturalism" chimes in with the recommendation that the government should adopt a programme of "no state funding for Muslim faith schools and ... an end to so-called 'chain migration' under which young British Muslims are pressured into marrying foreigners to afford their extended families a route into the UK.... It is surely also time for the Government to consider a legal ban on the burkha in public places. This is a nation where law-abiding citizens are not ashamed to show their faces. The era of politically correct cultural surrender must be brought to an end."

And, in the right-wing blogosphere, David T of Harry's Place takes the opportunity to have another go at Osama Saeed of MAB, accusing him of advocating "the deliberate slaughter of civilians" and helpfully providing a link to an earlier post describing Osama as a proponent of "clerical fascism".

what about The Sun? 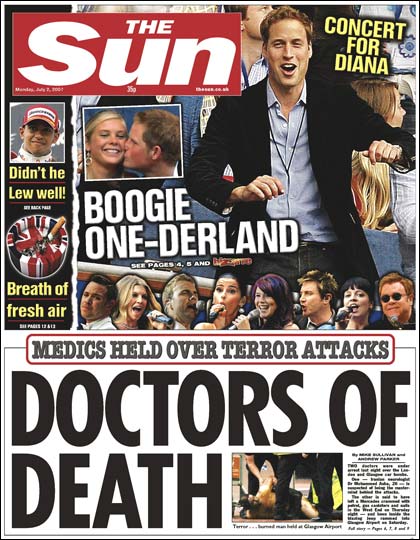 
"THE suspected ringleader of a plot to unleash a blitz of car bombs on Britain is an Iranian doctor arrested with his burka-clad wife."