As always, this years Pride demo attracted the unwelcome attention of society's more unpleasant elements. The protests were so pathetic they would hardly be worth mentioning had they not been so fucking comical. 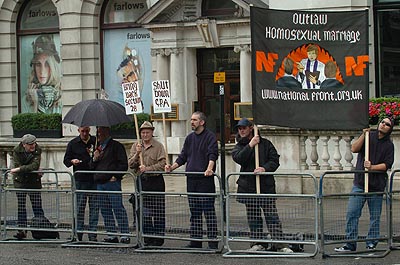 Another massive mobilisation by the enormous NF. 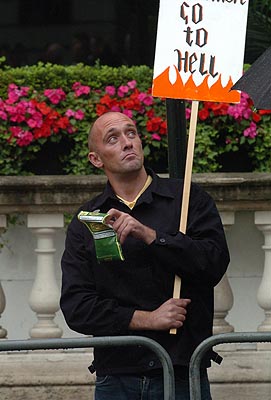 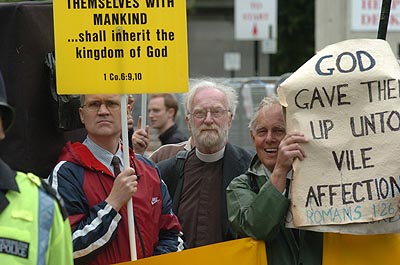 The Christian Right of little Britain. 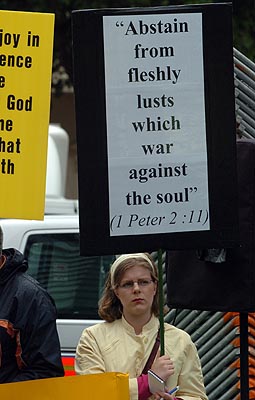 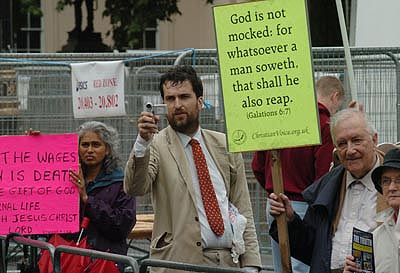 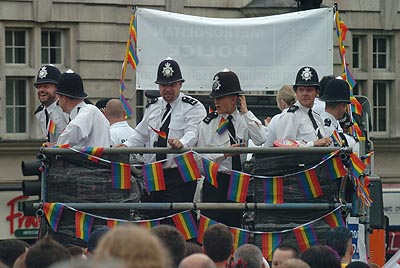 I wonder how these cops feel about about being abused... 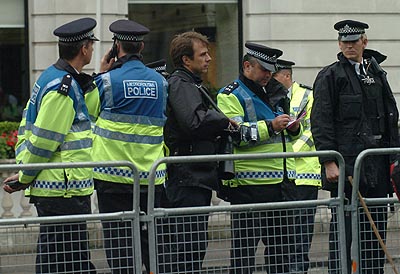 ...by nazis being protected by these cops?

The first 'counter demo' on the route of the march appeared in Haymarket. The incredible shrinking National Front showed up to make their point. You can’t help thinking that the NF still have not got over the fact that the peak of their popularity in the 70's was when they were led by the...erm… openly gay Martin Webster. Since then, their fortunes have declined to the extent that they could only manage 7 activists for this 'action' and at least one of them looked like he was on the wrong side of the barriers.

Their biggest banner reads:"Outlaw Homosexual Marriage" which seems a little odd as Peter Tatchell has just marched past with a banner reading "End the ban on Gay Marriage". It seems that the NF have a less than impressive grip on the law as it stands. Or is understanding the difference between a marriage and a civil partnership beyond their limited intellectual capacity?

As always they are being protected by the Fit Team who are pointing their cameras at any of the Pride marchers who dare to shout any abuse back. Ironically the NF are singling out just one group on the Pride demo for political attack. A placard reads "SHUT DOWN THE GPA" (Gay Police Association). I wonder if gay police would defend the Fit if they were targeted by demonstrators with a track record for violence and criminality? If the answer is yes, then the Fit are being less than comradely by siding with the Nazis who they are not even pointing their cameras at while trying to intimidate the gay community.

A bit further down around 30 rightwing conservative Christians are quoting passages from the bible and looking more like the cast of the 'League of Gentlemen' than anything else.

You have to wonder why they bother with these counter demos as all they are doing is providing light entertainment for the Pride marchers who far from intimidated. If anything their moral is boosted by the size of the opposition.