On Monday Pauline Campbell returned to HMP Holloway in North London to bring her unique form of protest to the scene of yet another woman fatality in the prison system. The last Pauline was here in 2005:

It was to protest over the death of Karen Anne Fletcher. Pauline was arrested but the charges were later dropped as they usually are. The Prison system is decidedly nervous about giving the Pauline the platform of a courtroom to relay embarrassing facts. One such fact is that since the death of Pauline’s daughter in Styal Prison in 2003 a further 38 women have died in Prison in dubious circumstances. Pauline was at Holloway on this occasion to mark the death of Marie Cox who died inside the walls of Holloway on June 30th.

N.B. Two Policemen were primarily involved in the incidents described below. As referring to them as NI 649 and NI 463 seems a bit impersonal so I have decided to call them ‘Porky’ and ‘Porkier’. 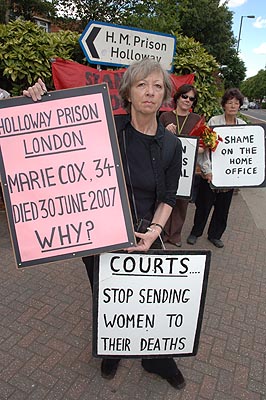 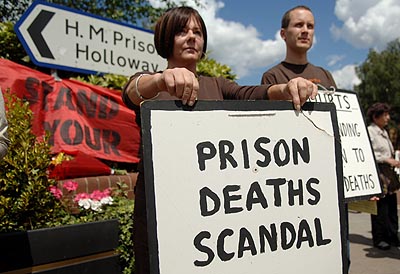 Because yet another inmate... 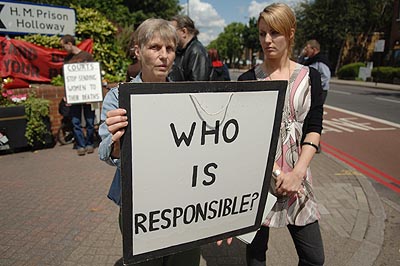 ...has died is dubious circumstances. 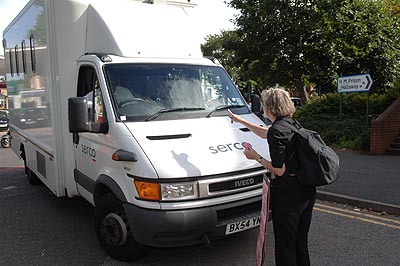 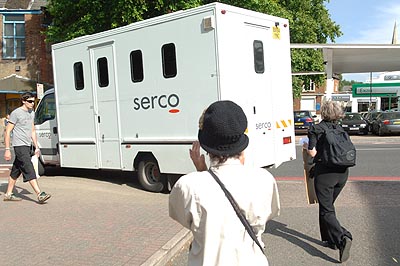 So it turns around... 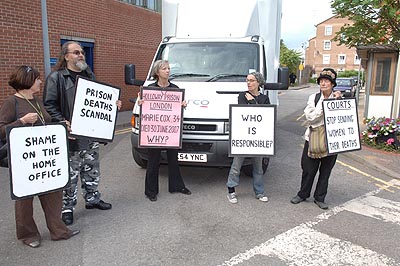 ...and fails to sneak in the side entrance. 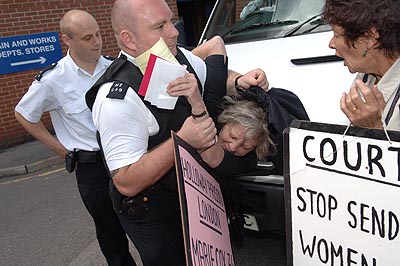 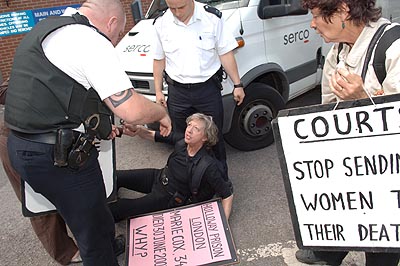 ...and throws her to the ground. 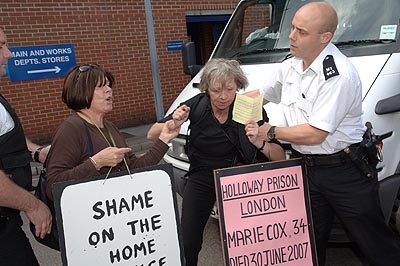 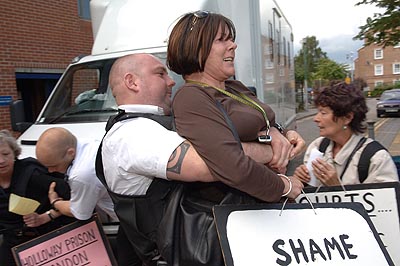 So she gets carried off. 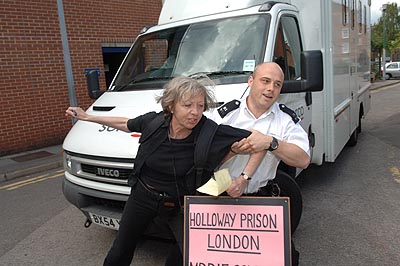 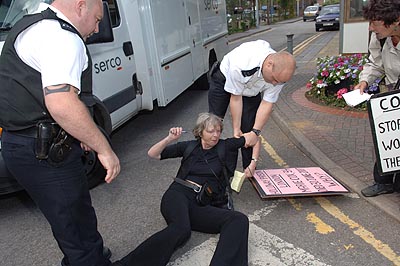 ...and thrown on the deck again. 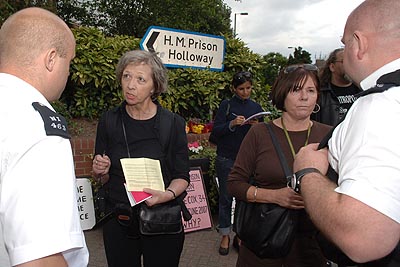 If the cops were hoping that their violence would intimidate these women... 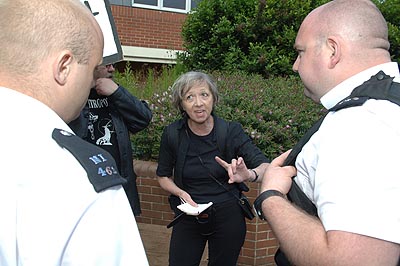 ...they were sorely mistaken.

Pauline was joined on this demo by a handful of activists and also Gwen Calvert. Gwen is a pensioner and the bereaved mother of Paul who died in Pentonville prison while officers responsible for his welfare played backgammon.

The demo commenced at 1pm with Pauline spending much of the afternoon chatting to the media about the hidden facts of incarceration for women in this country. The atmosphere was cordial and non confrontational with passers by taking leaflets and chatting to the assembled protesters. Some individuals who have asked not be named even passed some info to the protesters about what was going on inside Holloway including some of the stories that have not reached the media.

Then at about 5.10pm a Prison van arrived to deliver a detainee to the prison. Pauline positioned herself in front of it and began to argue with the driver that the prison was not a safe place to bring the detainee so the van should turn around and take her elsewhere. The driver was less than amused and started aggressively revving his engine and lurching the vehicle towards Pauline making contact with her at least once. Eventually he lost the war of wills and recklessly reversed the van out, mounting the pavement at least twice. Fortunately for him none of his bosses were present to witness him willfully damaging Prison Service equipment. Can't of been much fun for whoever was getting bumped around in the back either?

Having driven off down the road the van then appeared further inside the entrance having tried to sneak in the side way. Pauline quickly moved her protest inbetween the van and the Prison entrance. At this point two rather generously proportioned (fat) cops showed up and asked what is going on? The driver of the van demanded that Pauline be arrested for criminal damage to the van that he had just driven at her, prior to wrecking its suspension. ‘Porkier’ (the larger of our two plods) asked Pauline if this was true? Meanwhile ‘Porky’ started ordering the other demonstrators to move away. While Pauline was in mid sentence attempting to report the van driver for dangerous driving, ‘Porkier’ grabbed her by the throat and arm and threw her to the ground. Gwen intervened to verbally protest at what had just happened to Pauline and ‘Porkier’ responded by grabbing her in a bear hug like hold and physically lifting her to the pavement. He then dropped her and roughly pushed her towards the others. Fortunately she stayed on her feet. Gwen is over 60 years old and has a heart condition. This was also her first ever demo and she was inspiring.

At this point ‘Porky’ grabbed Pauline who was now back on her feet threw her to the floor again. He then dragged her across the road to where the others were arguing with ‘Porkier’. Pauline was then told that she was under arrest as she was led away. Then things started getting surreal as the two plods changed their minds (without de-arresting her) and became all sheepish when two of their colleagues showed up. After a consultation with one of the Prison hierarchy (possibly the Governor?) who appeared by the main gate our two heroic cops accost the women again to say that they were leaving but would be back if there was any more trouble. This seemed unlikely as all the trouble really started when they arrived and the van with its unhinged driver was now safely inside the gates. After Pauline made her feelings known to them in her own unique and forthright way they left. Even though she was technically still under arrest!?

It’s hard to imagine if there were any Police procedures or guidelines that were not willfully defied during their short intervention. You also have to wonder why the MET sent the cast of the Munsters to deal with a situation as sensitive as a demo being held by two bereaved mothers?

Pauline and Gwen are taking legal advice; footage has been supplied to the relevant lawyers.

Prison suicides are up to two a week this year in England and Wales, and that doesn't include the other deaths in custody that occur outside prison or aren't attributed to suicide. In Scotland there seems to be a similar yet smaller death rate which presumably reflects the lower overcrowding in Scottish prisons, but there are still six people dead in Scottish prisons since March of this year. Meanwhile the Government has decided to exclude deaths in custody in new corporate manslaughter laws despite pressure from the Lords, and have threatened to abandon the legislation completely if the Lords protest.