A text message and short phone call last night revealed that three Shell to Sea protestors have been jailed on assault charges against the Garda.
The text message from one at the Rossport Solidarity Camp said the three men were found guilty of assaults on the police.

One man received three months, another one month and the last is facing four months in prison.

A forth man is also facing the same charges.

An appeal is set for today to see if they can over turn the charges, but as the message I received last night said it did not look good.

For further updates keep your eye on here or on: 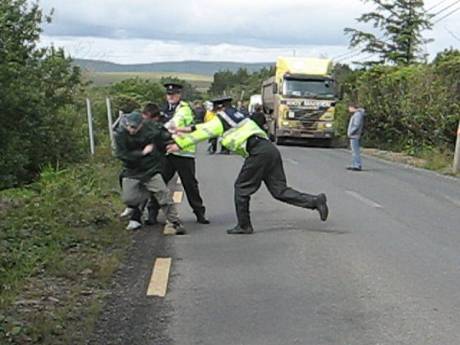 Three fisherman, who formed a "rugby like scrum" to force a Garda Sergeant into a drain during protests at the Corrib gas terminal in Bellanaboy last October, were each sentenced to three months in prison and fined €500 each and by a District Court Judge yesterday.

Jonathan O'Donnell was sentenced to a further month in prison and fined a further €250 for assaulting Garda Barry Byrne on the same date.

The prison sentences are to run consecutively.

A third defendant, Enda Carey (21), Porturlin, Ballina, was sentenced to three months in prison and fined €500 by Judge Devins for assaulting Sgt Glennon. Recognisances were fixed in the event of an appeal.

At previous hearings, it was alleged by State witnesses that Sergeant Glennon had his right thumb fractured when he was 'backflipped' into a drain during protests.

Sgt Glennon gave evidence that he landed head first in water after being stuck in the midriff in the front during the incident.

Judge Devins visited the location where the alleged assault had taken place before making her decision.

Yesterday, she refused a plea by Alan Gannon, solicitor, to suspend the sentences.