Supporters of John Bowden, who was placed in solitary and moved to a closed prison shortly before a parole hearing in April 2007 because of his contact with a peaceful anarchist group picket the Parole Board HQ in London today. Short report and pictures (Copyright: permission required for use; payment required for commercial use.) 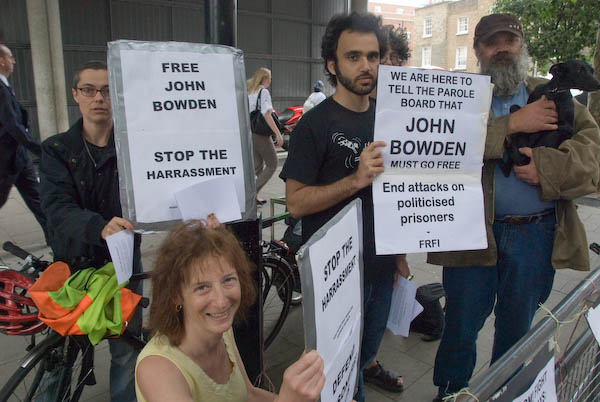 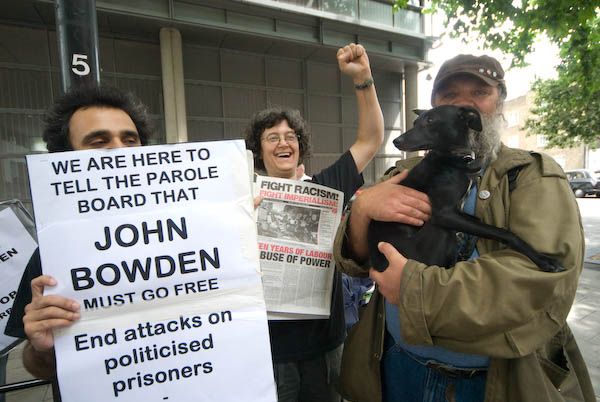 John Bowden has served 25 years in prison, and was held in an open prison for 9 months awaiting a parole board hearing which would assess if he was suitable for release. In April, a politically motivated report by a right-wing social worker led to him being placed in solitary confinement and moved to a closed prison.

The reason behind this was his contacts with Anarchist Black Cross which supports prisoners who have been involved in the class struggle. The picket at the Parole board was part of a second international day of solidarity.

The picket started and 12.30 and when I left them shortly after 1pm, there were around ten people present, (less in the pictures as some did not wish to be photographed.) I'm told the picket was later almost doubled in size with the arrival of a group who had been hoping to protest on another issue before coming to the Parole Board.

A few more photographs shortly on My London Diary,

(Article first submitted a couple of hours ago but didn't work - apologies if duplicated.)


In Leeds, support activities started early with a banner drop over the north bound multi-lane A58 motorway. The banner, over 3m in length, read ‘Free John Bowden’ with the ‘Friends of John Bowden’ website address. It had been expected that with a bit of luck the banner might remain in position for 30 minutes before it was removed, but it is STILL there, having been seen by thousands of motorists!

Next, a much larger banner was erected at the rear of ‘The Common Place’ social-centre. Since this is close to Leeds station, and right next to the tracks, where trains going north from Leeds, or arriving, are travelling at their slowest, it is a perfect location. The banner in this case reads: ‘ Free John Bowden – Hostage to Scottish Prison Service lies’. It also contains the ‘Friends of John Bowden’ website address.

The Common Place was the setting for the rest of the day’s support activities. Leeds ABC did an info stall, with leaflets about John’s case, ‘Writing to Prisoners’ leaflets, copies of John’s pamphlet ‘Tear Down The Walls!’ and much more. Banners were put up and a table was arranged with writing materials and a stack of postcards addressed to the Scottish Prison Service (SPS). There was also food, which was kindly prepared by Ben from the Common Place café collective.

John’s supporters, who attended the event, spent the afternoon writing out cards and letters to the SPS, to the Governor of Glenochil prison, where John is being held, and to the employers of Matthew Stillman, the SPS stooge responsible for the lies against John and the ABC. The SPS were also bombarded with e-mails and phonecalls, as well as Glenochil prison itself.

The centre-piece of the Common Place support though was a huge A1 ( 2ft x 3ft) ‘postcard’ to John, signed by everyone who took part, and with the words ‘Hands Off John Bowden’ stencilled on the other side. We’d love to see the faces of the screws when it arrives at Glenochil prison!