the prince charles cinema is proudly advertising the socpa movie which will be shown there on sunday at 1pm, followed by a q&a session with rikki the film-maker, milan rai from peace news, and mark barrett from the parliament square picnickers. there's also now a film trailer on youtube. 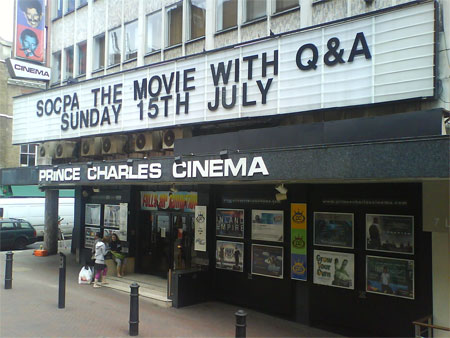 the mainstream media have been reporting that gordon brown has relaxed the laws governing protest around parliament. even mark thomas has been taken in, citing this and the attempted car bombs as reasons to cancel his monthly mass lone demos. well, i've got news for you all.

this is so much bullshit!

only this week, brian haw, barbara tucker, charity sweet and steve jago were all assaulted and then arrested for supposedly obstructing police officers. the police were trying to seize a genocide banner that barbara was carrying as she left westminster magistrates court on tuesday. she had been in the court that morning to defend a ridiculous charge of obstructing the highway, but the crown prosecution service, after vacating the trial twice before, decided not to offer any evidence. what a waste of everybody's time and money!

the banner was at the court for evidential purposes, but the police wouldn't listen, and when the campaigners resisted, they were savagely assaulted, bundled into vans, and then held for several hours before being charged with these ludicrous offences.

so 'socpa - the movie', which has been in the making for two years, is very pertinent just now, and it's your chance to see this one-hour movie this sunday at a west end cinema, with a question and answer session afterwards. the panel will be milan rai, from justice not vengeance and pece news, mark barrett from the parliament square picnics and peopleincommon.org, and the film-maker rikki.

the film features an original music soundtrack, and although hard-hitting and serious at times, there are moments of sheer bliss as the surreal nature of the law and its enforcement are documented (police say the silliest things!).

the film starts at 1pm this sunday the 15th july

Wow rikki - what an awesome and powerful movie. i would urge all who care about our basic freedoms (or what's left of these freedoms) to see it. An impactful movie that really tells a powerful story about SOCPA and the campaign against it. Best Wishes,

I agree this was a good film, and great to see it being shown in such a central location - near Leicester Square! I wouldn't want to give everything away (for those people who might have a chance to go and see it) but the Charlie Chaplin bit was amusing! Having said that (!) I would say the film included most of everything that I can think of at the moment, from the protests when the SOCPA law was first introduced, the picnics and arrest of Mark Barrett, through the attacks on Brian Haw's displays, Mark Thomas 'lone' protests, No More Fallujahs, and the Sack Parliament day.

The Q&A session after the film was also very interesting with many important points made by both the questioners in the audience and the 'panel'. I thought especially poignant were comments by one member of the audience on the difficulty of going to protests alone and not having support from other people - either friends or other activists and the general climate of having so few people campaigning on important issues.