"[But]our services and police do a heroic job for our country day in day out and I can say that over the past years, as this particular type of new and awful terrorist threat has grown, they have done their utmost to keep this country and its people safe.As I saw again from the meeting of COBR this morning, their determination to get those responsible is total." Tony Blair 11 July 2005 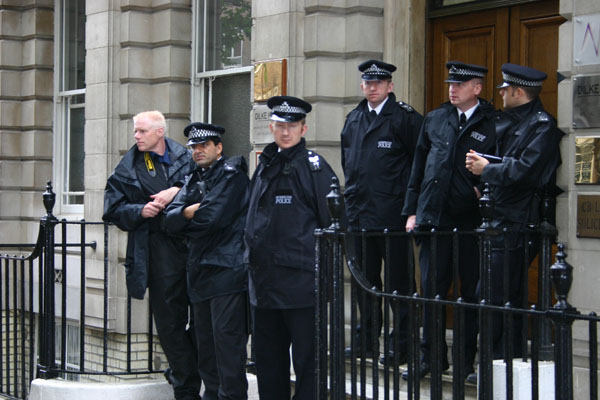 In the aftermath of the discovery of "potentially viable devices" in London on Friday 29th June, 2007, the Metropolitian Polices' Forward Intelligence Team (FIT), under the command of the Commisioner's Office, utilised its resources to cope with what the new Home Secretary described as "the most serious and sustained threat to our security from international terrorism", by sending out teams of cops to photograph attendees at publicly advertised open meetings.

In the aftermath of the Glasgow incident which involved a burning doctor and his SUV, COBRA raised the UK's security alert to critical, the highest level. The Met celebrated this by sending the FIT team to photograph a picnic in Cambridge

In addition to photographing attendees at the Disarm DSEi meeting at ULU, another FIT posse was seen outside rampARTs on the Saturday morning, snapping attendees of the No Borders meeting. That same team was later spotted at Gay Pride, where it is reported they snapped pictures of marchers who jeered the BNP, and then watched the BNP abuse their own colleagues on the Gay Police Association float.

It has become standard practice to see FIT outside Disarm DSEi meetings, and their presence has not prevented disruption of previous Arms Fairs, nor has it led to any significant arrests or convictions. In light of this, if Blair's words contained any truth, it would be reasonable to expect that they might have forgone their ritual harrassment of activists against death fairs, deportations and dangerous crops, and focussed on "getting those responsible" for the London and Glasgow events instead . That it was business as usual says a whole lot about their real priorities. Tactics designed to deter protest against the interests of big business and the racist state remained a priority, even as their political masters and the lackey corporate media bigged up the so-called "Terror" allegedly brought about by inept and angry medical staff.

Everyone knows that Blair is a serial liar, and the overhyped claims about terror seem less credible as the priorities of the Commissioner's Office and its FIT team remained unchanged despite the bleatings of Jacqui Smith. That the terror level was dropped to severe again before the questioning of the suspects was even completed seems bizarre. If they were that sure they had the culprits, why haven't more people been charged?

Something is fishy about this whole Terror spectacle.