Some Impressions from the first Squat “Rebil” in Romania

On Friday the 6th of July a group of anarchists squatted an old “cinema” building in the city of Iasi, close to the ukrainian/moldavien borders. This first Romanian squat is named “Rebil” as an anagram for “liber” meaning free in Romanian. 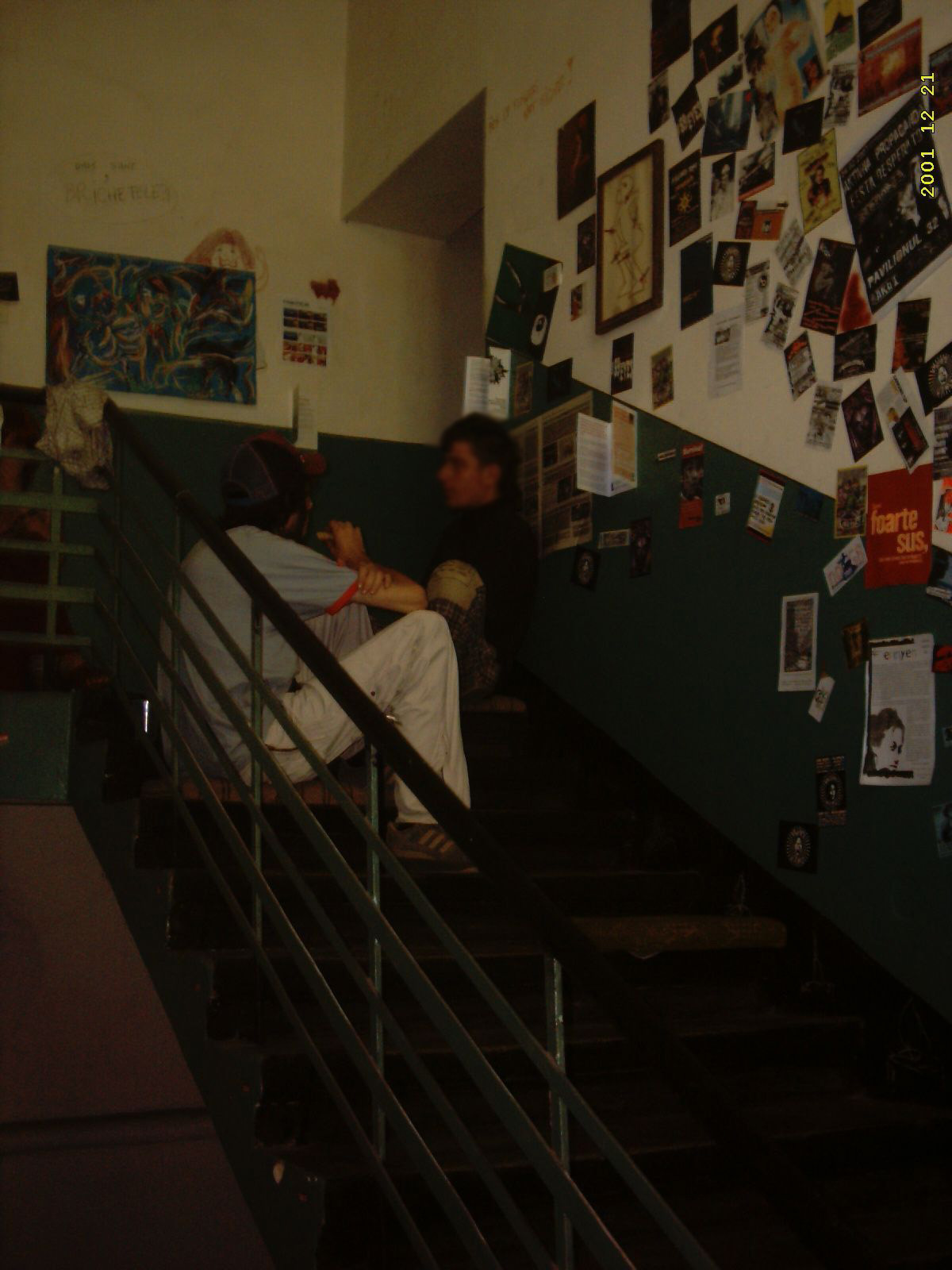 stairs up to the community space 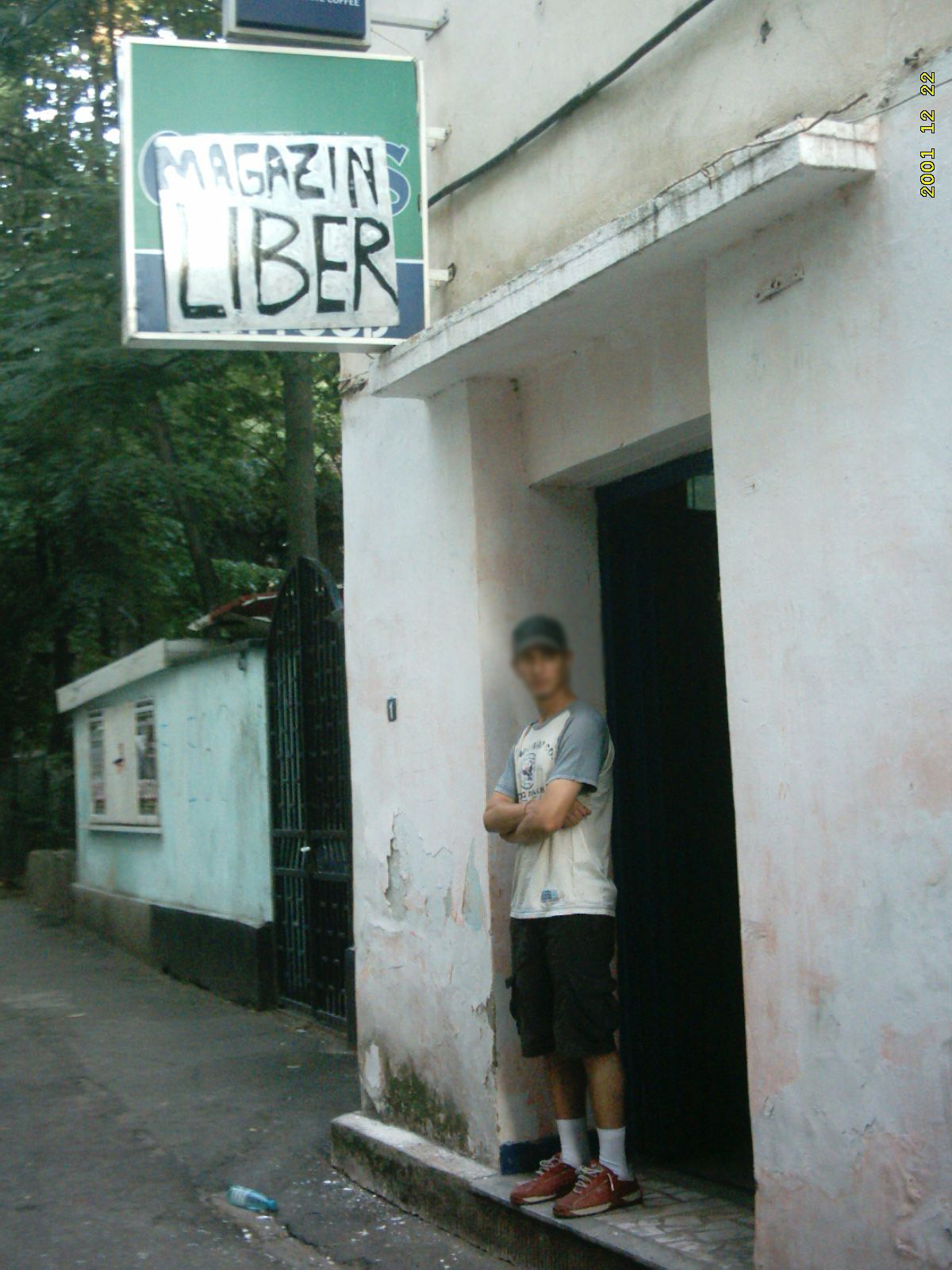 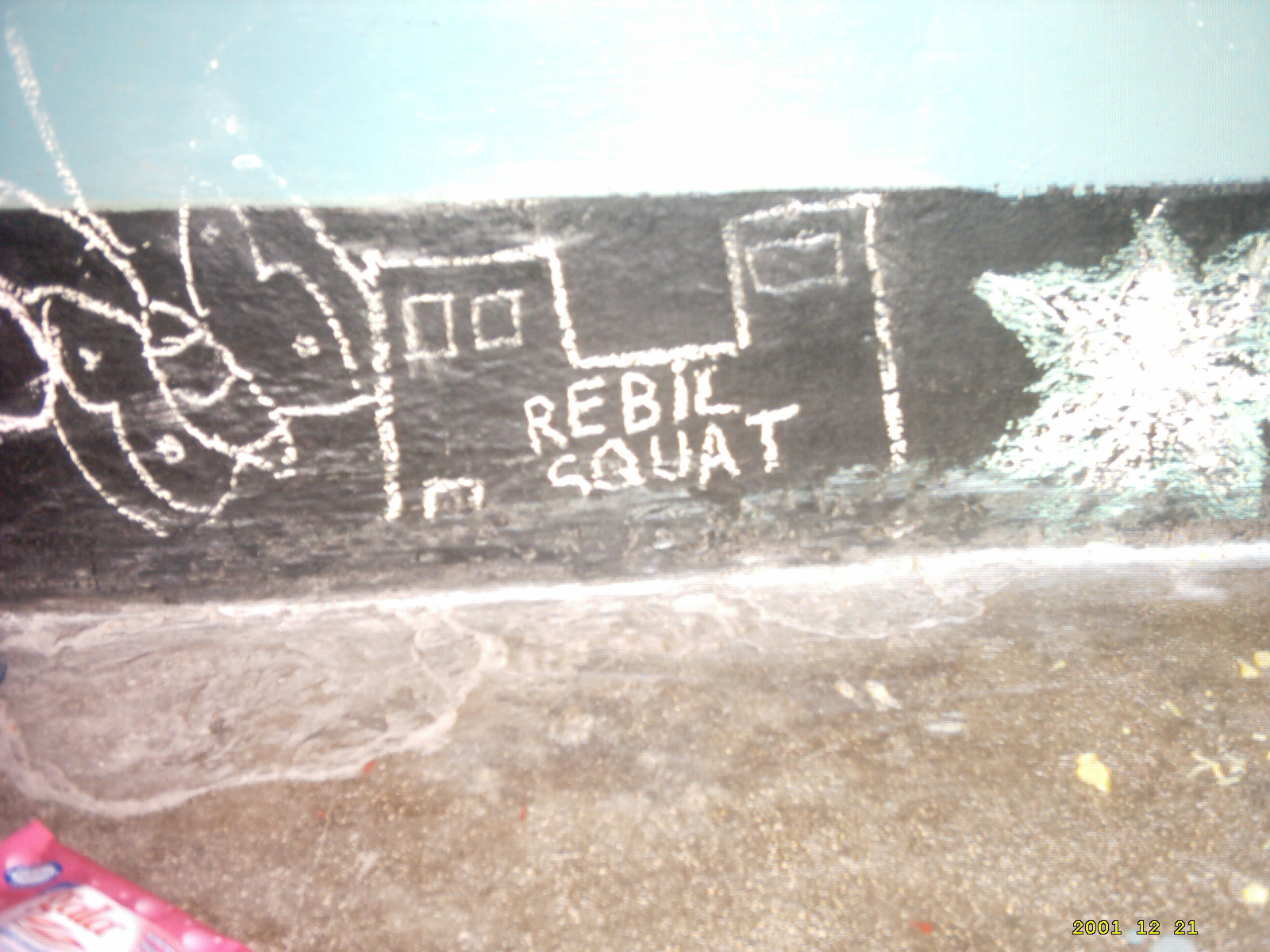 some drawing on the wall 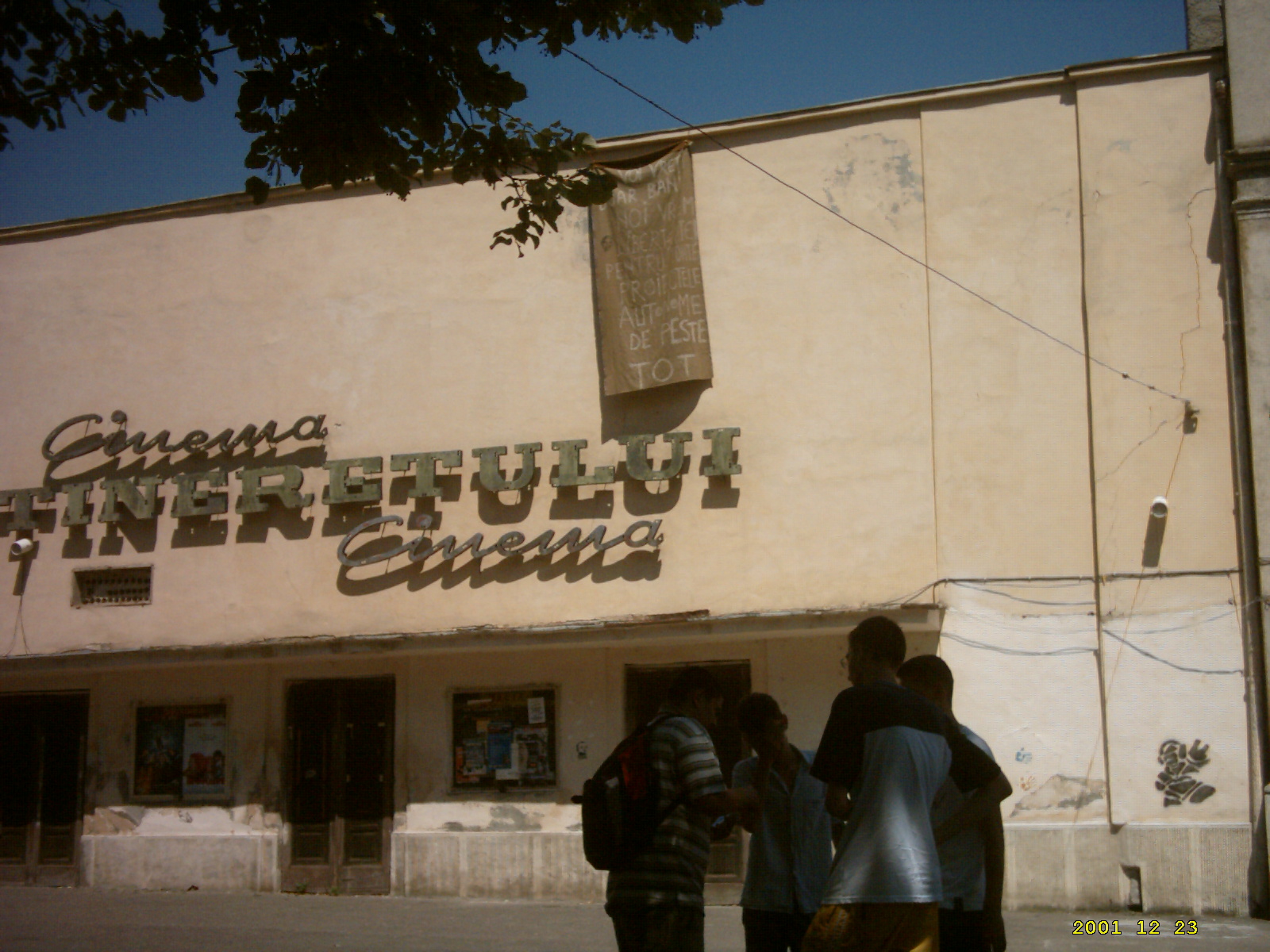 Since 4 (?) years the building in the center of Iasi is abandond, belonging to the Ministry of Culture and Cults (means the orthodox and catholic churches), at the same time under the maintainance of RADEF (Autonomous Society for Movie Distribution and Commercialization), both situated in Bucharest.
In 2007 the ministry announced a new law, which supports the selling out of the state cinema spaces to private businesses under the direction of using it for “somekind of art or cultural event”. RADEF announced that under this law it will probably dissolve itself by the end of 2007.

During some Food Not Bombs actions the squatting group got in contact with some ‘non-political squatters’ (socially and economically excluded families squatting for having a roof over their heads) who already since 1 ½ years squat a nearby building.
So after entering the building the two different groups got together to paint and decorate the garden that unites both buildings. Also they started to build a community and living space, a free shop with clothes, an info-shop as well as making the toiletts usable again and building some electricity connection. The squatting group also started to make 24h shifts to guard the squat. After two days the administrators started to come and tried to make some pressure. Friday the 13th of July a representative from the ministry as well as the priest with his lawyer showed up and demanded the evacuation of the place till Monday the 16th. As well as using intimidation and threats to some squatters if they would not stick with the deadline.
Until than there where no informations regarding the actual standing of the court trials, but it seamed the priest is trying to get it through some deals. So the group started on the weekend with the blocking of the squat and building of barricades as a work in process for Monday. Also people tried to gather legal information on the possibilities and difficulties of sqatting in Romania. Than on Sunday the squatters got informations from the legal side, that say the court trial is over and the ownership has shifted from state to private, means to the f***ing priest. This would mean regarding to a new law also a much more serious court senctence. The squatters would have to face a minimum of 4 years in prison if arrested and put in trial for the squatting.

Different informations, threats form the priest and ministry, a possible prison sentence as well as the lack of any past squatting activities to build on, leaves to a state of insecurity among the most squatters right now.
But never the less, people do not want to give up. It is the first move for testing the grounds for future squats in Romania. It is also an important autonomous space for planning actions, as well as a free meeting space in the middle of town. For many of the squatters it is giving the building (which was not used for so long) and much more (the idea of making social change totally autonomous, without corporate money, hierarchical structures …) back to the people in general.
So in long and hard discussions it was decided to open the info/free-shop on Sunday, giving out clothes, making movie-projections in another room and the discussions with interested people took until late in the night. Over the day propably over 50-60 people came. Also a banner was painted to put over the freeshop “magazin liber” and a large banner with the slogan “you want money, we want freedom, for autonomous places everywhere” was prepared to pull it down from the building in the night, towards the street which is kind of a piazza with many people passing by everyday and also right opposite the church where the “new owner” is in. Ways into the building where barrickaded till late in the night, and other ways prepared to get inside for the squatters, not easy to access by outsiders. Because of the impossibility to relay on former squatting experiences here, nobody knew how the police and the state would react. So it was decided to pull the banner, block everything, but stay outside of the house on Monday, the day of the deadline, to see how serious they react.
The whole Monday now the place is covered by secret police, the priest running up and down, the administrators, the lawyers … looking like beehive. Everybody tries to get to the banner to take it down, but until now they are not able to get into the building. Still hear them trying to get through the blockades and furiously asking people, if they now where we went … well, the game is on!!!!!