Funke Olubiyi and her young son Joseph from Nigeria were detained on Monday 16th July at around midday when they went to sign in the Home Office in Glasgow. They were taken to Dungavel the same day and now they have a removal date for tomorrow Thursday 19th July from Gatwick airport. 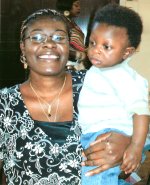 Funke fled Nigeria in March 2006 when her family tried to force her to marry an older man. Her family beat her so badly as a result of her refusal to marry this man, that her hand was broken and she suffers pain from this injury to this day. Her mother died some years before and she has no one to support her in her family. Joseph was born here in the UK in London in September of last year.

A US State Department report cited in the Home Office's own 'Country of Origin' report says "Domestic violence was widespread [in 2006] and often considered socially acceptable". The report goes on further to cite an Amnesty International May 2005 report 'Unheard Voices - Violence Against Women in the Family' ;

"Countless women and girls in Nigeria are subjected to violence by some members of their families and within their communities, as in many countries throughout the world. Women of all ages and from all socio-economic groups, living in rural and urban communities, are affected. The lack of official statistics makes assessing the extent of the violence an almost impossible task, but studies suggest levels of violence are shockingly high. More than a third and in some groups nearly two-thirds of women in Nigeria are believed to have experienced physical, sexual or psychological violence in the family"

The Amnesty report also states that "The criminal justice system provides scant protection, the police and judiciary often dismissing domestic violence as a family matter and failing to investigate or press charges".

16 years on UK Government still in breach of child rights - the Government's report on its implementation of the United Nations Convention of the Rights of the Child (UNCRC) shows that there are still key areas where children's rights are being breached across the UK.

"It is unacceptable that the UK Government is still not respecting the Convention, despite being one of the world's most advanced democracies. The Government continues to ignore most of the recommendations made by the UN in 2002 and is therefore failing to protect the most vulnerable children in our society." Douglas Hamilton of Save the Children

Even by the Home Office's own information Funke and Joseph would face considerable danger if returned to Nigeria. We are asking people to fax the Home Office on their behalf to ask that they can stay in the UK in safety.

Urgent action needed:
Send faxes to Rt Hon Jacqui Smith, MP, Secretary of State for the Home Office asking that the Funke and Joseph be allowed to stay in the U.K. Please Remember to quote their Home Office Reference Number O1108393

and coming to see the folk at the unity centre later today! Thanks everyone who sent faxes etc.