Port-Au-Prince; July 11, 2007 Press Release Concerns of the CTH, regarding the management of the Country. 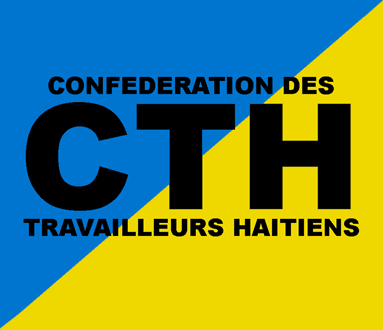 After the democratic battle, led by the Workers and the Haitian People through their voting ballots during the elections of February 7, 2007; where they gave birth to a government conceptually eradicating unemployment, poverty and insecurity.

Today, the CTH notes that the Workers and the Haitian People are running out of breath; instead of this government taking concrete measures to put the country on the path of development, while facilitating the creation of employment, on the contrary, it prefers to duck into program of privatization of the public sector, while giving free range to unemployment, poverty and hunger.

At the present time, the Préval / Alexis government decides to reel more than 1,500 fathers and mothers, heads of household who work at Téléco, into unemployment, where they will grow the informal sector.

Facing the calamity and suffering situation in which the Haitian People stagnates; today the Préval / Alexis Government is satisfied by taking anti-union decisions without, however, succeeding in setting up programs that could bypass the privatization of the State sector. Isn't this a way to put an end to the life of the Workers in particular , and Haitian People at large, wonders the CTH?

Under this hospice, what kind of hope remains for the Workers and the Haitian People, a sigh of relief, points out the CTH.? The worst is that the government does not multiply many efforts to encourage investment, and the private sector has practically disappeared. As a result, the Workers are left to themselves and abandoned on the street.

Would the privatization of the State sector be a mandatory path, the law on the CMEP is very specific on the way the State should proceed, regarding their modernization; that is, by management contract, concession or capitalization. Which of these three ways does the government chose to reach these goals?

The CTH believes that the procedure set up by the State to compensate the employees of the Téléco is unacceptable. And that the funds made available, commensurate to the numbers of years of service in the sector are literally insufficient.

As an organization of Workers that believes in participatory democracy, the CTH encourages the dialogue process that already started between the government and the Union Movement.

Hence, the CTH thinks that the matter of privatization of the public sector, and particularly of the Téléco has to be updated by its two partners to be analyzed; then, it will lead us on the path of viable and reasonable solutions. For the role of the State is not a witch hunt, but preferably, to guarantee job security, while creating employment, essential condition to allow the Workers to take care of their families with dignity.