Copied from IMC Scotland: On the morning of 20th July, the Icelandic embassy on Queen St, Edinburgh was targeted by members of Saving Iceland(1). Paint was thrown on the building, the lock was glued and a message was affixed to the exterior reading “The Whole World is Watching”. “Iceland Bleeds” was also painted on the steps. The action served as response to recent acts of police brutality against Saving Iceland activists in Reykjavik who continue to oppose the assault on the Icelandic wilderness by heavy industry. 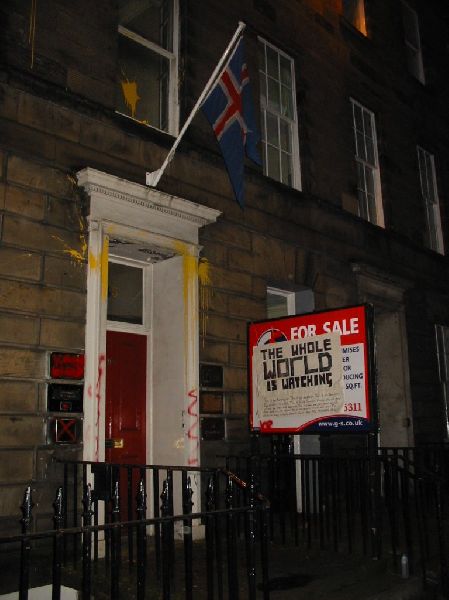 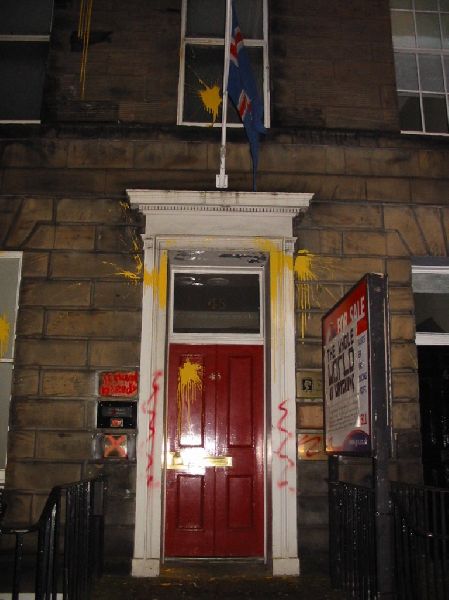 Icelandic Police attacked a non-violent Reclaim the Streets protest in the centre of Reykjavik, on July 14th. Video evidence(2) shows Icelandic police violently throwing protesters to the ground while others were punched and kicked. Five peaceful protesters were held in police cells, one with a broken rib after the police attack. The Reclaim the Streets demonstration was part of a continuing action camp held near Reykjavik this summer, involving activists from across the globe, including Scotland.

The recent expansion of large-scale aluminium production in Iceland has involved a barely democratic process and a comprehensive devastation of vast natural areas on a scale unprecedented in Europe today.

The Saving Iceland activists responsible for the action against the Icelandic Embassy state:
“We are sending a clear message to the Icelandic government that the destruction of unique ecosystems has environmental implications for us all. The repression of those who are opposing these destructive mega--projects is unacceptable. In the context of the current climate crisis we must all take responsibility for the destruction of our planet by criminal corporations such as Alcoa. The whole world is watching”.

The action in Edinburgh was an expression of solidarity with the activists and Icelandic people who are attempting to stand up to the unjust rule of the aluminium industry over democracy. Saving Iceland activists state: “We will not stop until the corporate invasion of the Icelandic wilderness has ceased. The world is not dying, it is being murdered. And those who are doing it need to be held accountable.”

(1) Saving Iceland is an Icelandic based direct action group opposed to continued expansion of heavy industry in Iceland. It involves participants from all over the world in collective resistance to the Icelandic state’s “Masterplan” which includes the damming of every major glacial river in Iceland by 2020 solely for the purpose of aluminum smelting. Saving Iceland has organised three summers of international protest to halt this vast destruction. It will not cease it’s opposition until all aluminum production leaves Iceland. For more info visit www.savingiceland.org

(2) Video documentation of the police violence on Saturday 14th in Reykjavik can be found at the following link. Note the use of pressure points applied for an extended period to the man on the ground and the accompanying and prolonged screaming: