In the early morning 21st July (20 o'clock 20.7. GMT) Nazi skinheads attacked an antinuclear protest camp in Angarsk, Siberia, Russia. The campers knew about the planned attack and had organized night guards, but they were much too few (1 to 3). The Nazis attacked the sleeping activists with iron rods, knives and air pressure guns. At least two campers became seriously injured: A person suffered a head-fracture, one became both legs broken. All tents were set in fire, several belongings were stolen.
The telephonenumber of the camp is: +79 24 621 2465

The camp started the last week-end against a planned center of uranium enrichment in Angarsk. The first reaction of the authorities was to arrest ten persons on the 14th July illegally. All of them were released after some hours but faced intimidations and their fingerprints. Since then the campers organised the contact with local population and have built up the camp. For the week-end everyday rallies were planned, with which it should be informed about the planned arrangement and the problems connected to it.

There have been allready several complications with security-forces, who penetrated the campers and tried to frighten them to get to know what they planned.

---
IRKUTSK, July 21 (RIA Novosti)) - One person was killed and at least seven were injured in an attack on an environmentalist camp in the Irkutsk Region in southeastern Siberia early Saturday, a local police source said.

Police said at least 15 assailants raided a tent camp at the Yelovskoye Reservoir near the city of Angarsk occupied by a group of protesters against reprocessing of nuclear waste at a local plant.

15 attackers raided the camp occupied by 21 environmentalists," the source said.

"A 21-year-old man was killed and seven people were hospitalized with injuries," he said.

Police said they have detained two suspects in the assault and identified at least 13 others.

A criminal investigation has been launched in connection with the attack.
---
source:

Some photos on Siberia Indymedia:

The Camp before the attack: 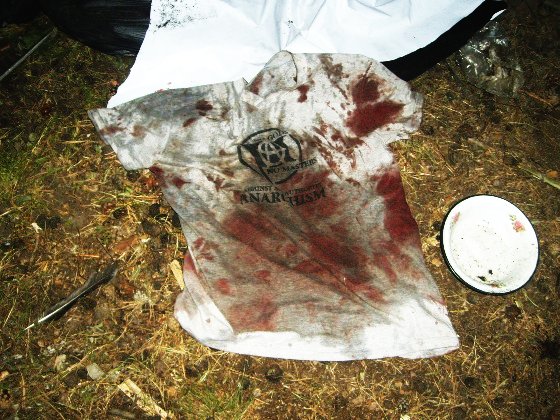