At around 2.30 pm today (July 25), Strathclyde police arrested 10 people, including atomic bomb survivors (‘Hibakusha’) from Nagasaki during a nonviolent blockade of the main gates of the Faslane nuclear base in Scotland, where the UK’s Trident nuclear weapons are deployed. 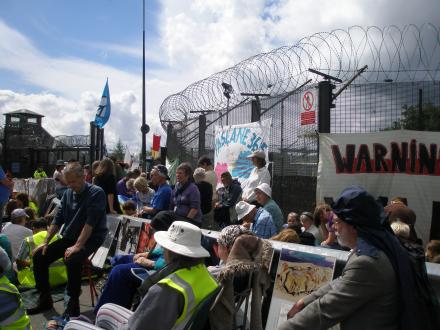 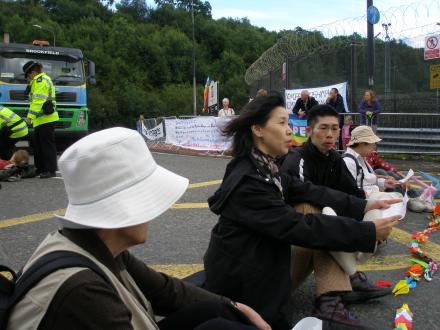 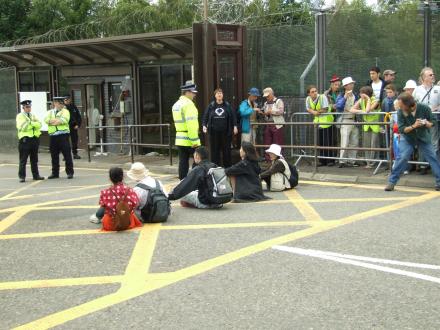 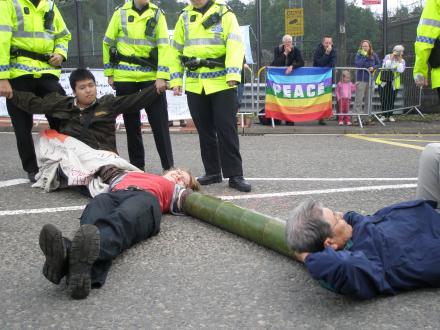 The Japanese group, supported by around 100 others, including a large group of Quakers, placed peace cranes in front of the main (North) gate of the base. As police moved in to remove the cranes, four grandmothers from Fukuoka and the son of a Nagasaki bomb survivor sat in front of the gate, while five more, including his father and peace campaigners from Hiroshima, Nagasaki and Finland locked themselves together with bamboo arm locks. The Japanese appealed to the Scottish and British governments not to deploy or renew the Trident nuclear weapon system. Though the police quickly ‘dearrested’ four elderly women and one young man, who had sat in front of the gate singing Japanese peace songs, it took them nearly an hour to cut the bamboo blockade and reopen the gate. The four Japanese men and a Finnish woman were charged with ‘breach of the peace’ and taken to Clydebank Police Station.

As he was arrested, Masahiko Moriguchi, head of the editorial committee of the periodical ‘Testimony – Voices of Hiroshima and Nagasaki’ who survived the atomic bombing of Nagasaki when he was 7 years old, said: “The Faslane 365 campaign in the UK is encouraging the epoch-making first step towards the abolition of nuclear weapons by calling on Britain to renounce Trident. As one who experienced the A-bomb, I wanted to see this nuclear base with my own eyes and personally take part in this action to halt the nuclear weapons.”

His son, Shinya Moriguchi (born in Nagasaki, now aged 30), was among those laying cranes in front of the gate. He said: “The UK’s decision on whether or not to renew the Trident system is not only a British matter, but will influence proliferation and insecurity around the world. I wish the UK to make a wise and rational decision and pioneer the road to nuclear abolition, which would make this world safer.”

Before being arrested in the Bamboo Blockade, Kohei Ueyama from Hiroshima (aged 26), said he came to Faslane to show solidarity with the Scottish people taking nonviolent action to get rid of Trident: “If we do something for peace in our neighbourhood and country, we can solve any international problem.”

Several members of the delegation are professors, scientists and teachers. Yoshiko Sakai, a retired quantum chemist, said she was “eager for Britain to be the first country that has the honour of abolishing nuclear weapons”. Physics professor Kouichi Toyoshima added, “As a member of the scientific community, I feel it’s my duty to make every effort to eliminate all such weapons from the world, since the scientists of today must take over the responsibility of our predecessors.”

Miyoshi Eisaku (60), Professor of Engineering from Fukuoka, brought an exhibition of photographs and paintings from Hiroshima and Nagasaki. As he was arrested he said “We have to bear witness to the horror of nuclear weapons so that they are never ever used in this world again.”

The names of those detained for the Bamboo Blockade are:
Kouichi Toyoshima, Professor of Physics from Saga University, aged 59
Kohei Ueyama (26) from Hiroshima
Masahiko Moriguchi, head of the editorial committee of the periodical ‘Testimony -- Voices of Hiroshima and Nagasaki’
Anna-Linnéa Rundberg from Åland Islands, Finland (member of the Faslane 365 Steering Group).

The names of the group who risked arrest by sitting down with peace cranes and singing in front of the gate are:
Yasuko Kuramoto (67) retired teacher from Fukuoka
Yoshiko Sakai (67) retired researcher in quantum chemistry
Shinya Moriguchi (30), the son of Masahiko Moriguchi, and a second-generation Hibakusha from Nagasaki.
Mariko Kuroki, language teacher from Fukuoka
Kayoko Toyoshima, who is Professor Toyoshima’s wife.

Maybe you could ask the

japaneese to protest about the Nissen company in the north east about to name their new model the Tome.In 1944 the jap cruiser the Tome picked up 72 survivors of the Behar.A british merchant ship belonging to the Hain company,later P and O.Built in 1943 she left Liverpool for Austrailia.On her return she was sunk by the Jap cruiser the Tome.The survivors were picked up.Then beheaded on deck.And then washed overboard with a fire hose.One of the crew was my dad and two others were my uncles.So you will forgive me if i'm not overjoyed about the A bomb survivors.

Seaman you is a twisted and bitter old dude!

So because you lost your dad and uncle (which without a doubt was a brutal and horrific death) you can justify the Atomic bombings and have no sympathy for the thousands of innocent victims. .I don't get the connection and maybe you should have a word with someone!

you missed my point

i have a problem with Nissen and the name of the new car The Tome.