Shell to Sea campaign intensifies as work on refinery begins

This summer has seen the Shell to Sea campaign gain increasing momentum as construction of the proposed onshore gas refinery in County Mayo, Ireland, begins. The planned refinery and the high pressure pipeline, which would supply it with unprocessed gas from the offshore Corrib gas field, have been bitterly opposed by local residents and their many national and international supporters, since it was first proposed in 2000. Shell and their partners Statoil and Marathon had hoped to have the facility in operation by 2003, but massive local resistance has meant that four years on, the development is still in its infancy.

Resistance was stepped up following the jailing of three local fishermen accused of assaulting Gardai (Police) during a Shell to Sea picket last year. On Wednesday 11th July, two years on from the jailing of the Rossport 5, these men became County Mayo’s latest political prisoners. The judge’s verdict was met with disbelief by all involved in the campaign and has resulted in an upsurge of community resistance. 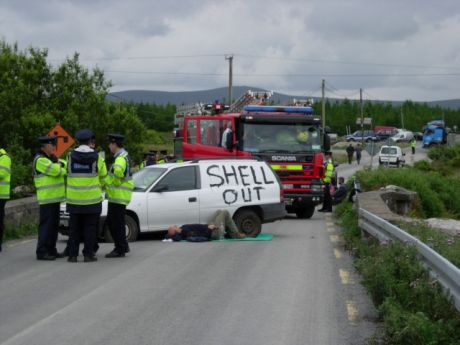 The three men were jailed on the basis of a prosecution case consisting solely of contradictory testimonies from members of the Gardai. Before sentencing the Judge stated that she had reservations about this evidence. In particular, that one Gard claimed he did not know if he had been hit by ‘a car or a person’, and another claimed to have been punched with the left arm of a right handed man. She also stated that the injuries detailed by the Gardai were not serious enough to warrant a section three assault charge. Despite this, she found the three men guilty of this charge. Pat O’Donnell and Enda Carey were sentenced to three months in prison, Jonathan O Donnell, four months. All also received a 500 Euro (roughly £330) fine. Experience of state and corporate corruption is now commonplace for this small community, but this overt complicity of the judiciary has still come as a shock. The injustice of the incarceration of three men with no previous convictions, based on a prosecution case with no evidence, has seen the Shell to Sea campaign once again revitalized.

The following morning the community responded with a show of strength at the daily picket outside the proposed refinery at Bellanaboy. Over 100 people came to demonstrate both their solidarity with the three men and their resolute opposition to Shell‘s project. As people attempted to use their bodies to block construction vehicles on route to the site the police responded with brutality. One woman was thrown across the road, injuring her hip, leg and arm, and a fifteen year old lad was injured when a policeman gouged his eye.

After the picket supporters drove to the fishermen’s bail hearing. Analysis that the verdict and sentence had been prejudiced, handed out by a Judge with a clear political agenda, was confirmed when she denied each of the men bail for various arbitrary reasons. She refused to accept cash as a bond, nor would she accept proof of savings from a joint bank account statement without both parties present (the person unable to attend was one of the imprisoned men!). Finally, she refused the latest statement from an individuals account for not being recent enough, despite the provision of a supporting receipt taken that day from an ATM machine.

The next day the consequences of the Judge’s decision were played out on the ground at Bellanaboy. The morning picket was well attended and clown army activists provided the picket with amusement while they held the Gardai’ attention. At 9.20am, a local resident and someone from the solidarity camp locked-on to a car, blocking a bridge on the main haulage route to the refinery site. Surrounded by around 40 supporters (held behind police lines) they maintained the blockade for around 6 hours. Meanwhile, other groups of local people set up spontaneous blockades on the alternative routes to the site. They used their bodies to obstruct the road, preventing Shell vehicles from passing but allowing free movement of other traffic. Construction lorries returned to their quarries with full loads as the haulage routes were blocked for most of the working day. At 15.20 the fire brigade cut the locked-on men free and they were arrested. The men were charged with several offences and released several hours later.

In the evening around 70 cars drove to meet the three fishermen who had been granted bail that morning. In an inspiring act of solidarity they were welcomed home by a vehicle procession through nearby towns with horns blaring and hazard lights flashing. When the procession reached the proposed refinery site it stopped. Around 200 people massed at the main entrance and people at the front of the crowd began to kick in the gates. Some people scaled the gates and undid the bolts on the other side enabling the final padlock to be easily forced open by the crowd outside. Around 100 people entered and marched through the site for around 20 minutes. Taking control of the Shell site was a fitting end to a highly successful day. The community here are clearly demonstrating that in the face corporate imperialism, continued Gardai violence and a biased judiciary, their dissent is unwavering.

More about recent events can be found at

What you can do