There will be a party on the Piccadilly line on Tuesday 31st July. Meet 7pm at Piccadilly Circus and catch the Southbound train. Everyone welcome

Bring music, small sound systems, balloons, funny hats, your drinks of choice, and a sense of fun. Oh and bring lots of friends

On Wednesday anywhere up to one million Londoners, may be banned from using the Piccadilly line in an injunction taken out by BAA (The British Airports Authority) See

That could well includes you

The injunction is designed to prevent ordinary people attending this year’s climate camp, a fun, peaceful week of workshops and talks about climate change. See

This may be your last chance to party on the Piccadilly line, so let’s make a night of it!

If you are on Facebook then please tell us you’re coming. See

And please invite all your friends, friends on facebook, friends in local groups you belong to, friends from everywhere.

Finally please email this to everyone you know who likes London , who believes in freedom of speech and who like to party.

Notes
1) If the tube station is really crowded, and there will be lots of people coming, please take care and wait for the next train.
2) If for any reason the station is closed or inaccessible then please go to either Leicester Square or Covent Garden and catch a southbound train from there.

This is "precisely the kind of irresponsible behaviour this injunction is designed to stop" say BAA's lawyers. Quite so, says the judge. We must be responsible here.

Is it not bloody obvious that this is a ruse set up by BAA to fuck you over?

the voice of reason

Look at the photos

Have a look at some photos of the party here:

More pics and a report 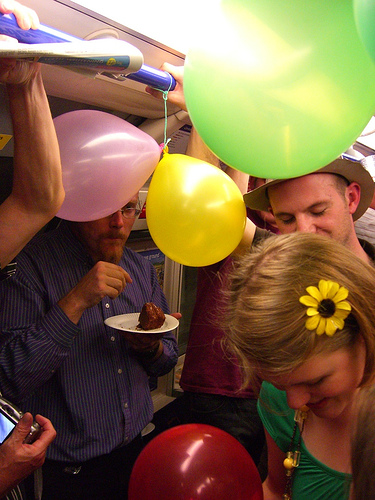 Along with a group of party-goers, I took to the Piccadilly line on the London Underground this evening - with balloons, party hats and cake - for one last chance fling before the proposed injunction sought by the British Airports Authority makes it illegal for millions of people to travel on the line.

Despite the jolly mood, we were all insensed that the injunction - being heard in court at 2pm on Wednesday 1 August - would be a massive infingement of civil liberities and if it goes through will restrict the movements around the UK of at least five million people. The Camp for Climate Action, a week of workshops and discussions about the threat of climate change, is being held later this month in the vicinity of Heathrow.

To prevent the camp taking place, BAA are seeking the injunction which will affect members and supporters of several organisations including Airportwatch, itself an umbrella organisation for those concerned about airport expansion, including the National Trust, the Royal Society for the Protection of Birds, the Campaign to Protect Rural England and many others - totalling at least five million. If the court agrees with BAA, these people will not be able to enter Heathrow or travel on an infrastructure connecting it, including parts of the M4 and M25, Paddington Station, and the Piccadilly line. If your a member of these organisations, you won't be able to travel to and from work, or if you have holiday plans that involve flying out of Heathrow... well, tough luck.

So a party was held on the Piccadilly line to celebrate what could be the last day of free, unrestricted travel. Around 50 people travelled from Piccadilly Circus in central London out to Heathrow and back again, offering balloons, sweets and information to commuters. The police were there all the way and although there was a heavily-armed presence at Heathrow, there was no reported trouble and we all made it back to town safely.

Now we're waiting to see what the results of the court hearing are, and whether corporate interests will be able to stifle legitimate and peaceful process. Bets are open.