Today, Philippine President Gloria Arroyo will again address the Congress to give a report on the achievements of her government, and at the same time express her primary focus for the next year. As she did during her previous State of the Nation Address (SONA) speeches, she may yet again boast the economic feats of her administration, including the strengthening of the peso and the recent booming of the stock market. 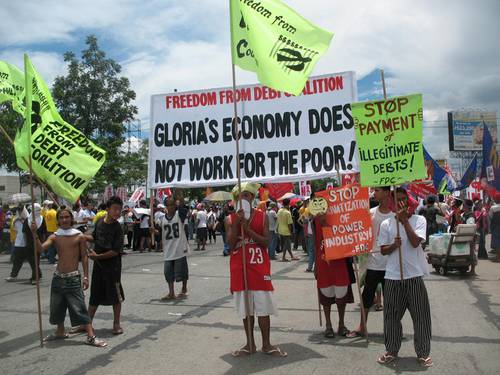 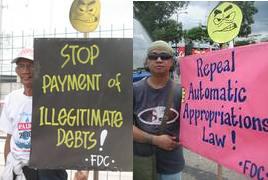 The Freedom from Debt Coalition (FDC) continues to assert that Arroyo’s economic governance is defective in all significant aspects of human development. Her so-claimed economic growth never really benefited the poor majority, and had only resulted into pushing the common Filipino further into a struggle for desperate survival.

Let us look at the features of Arroyo’s economy:

= Biggest borrower. As of March 2007, Arroyo already borrowed an amount of P3.24T, compared to the P1.51T combined borrowings of the Aquino, Ramos, and Estrada administrations
.
= Most religious debt payer. As of 2005, Arroyo also achieved the record of being able to pay P2.38T in debt service, dwarfing P1.81T of the combined Aquino, Ramos, and Estrada administrations
.
Spending Policy is Pro-creditor, Anti-development

- In the 2007 budget alone, P622B was earmarked for debt service (interest and principal) while education and health received merely P146B and P13B respectively.

= Mis-spending. This policy had only become possible through abject neglect of other sectors. Real per pupil spending (200 prices) dropped from P5,830 under Estrada to P5,467 under Arroyo. Real per capita health spending dropped from Ramos’ P321 to Arroyo’s P303.

= Regressive taxation and narrowing of the tax base. Since Arroyo failed to tax the rich due to massive tax evasion of corporations, Arroyo instead opted for consumption taxes (E-VAT, R-VAT) practically targeting the common man’s income.

= Accelerated privatization as a palliative for poor revenue collection. Not being able to achieve its tax and revenue collection targets, the Arroyo regime resorted to the unabashed selling of government’s assets, like the TRANSCO.

= Padding revenues through increased borrowings. Arroyo had been able to cheat her revenue reports by borrowing more than what was needed and reporting the resulting surplus as revenue.

Clearly, this kind of an economic policy only resulted to a decline of social development and consequently, of human productivity. Arroyo may have thought that she could “cheat” her way towards a “robust” economy

= Poor investment record. Contrary to Arroyo’s claim that her liberalization policies caused a healthy flow of foreign direct investments, our country actually has the worst investment record among Asian countries. Gross Domestic Investment is only 14.8% of GDP, compared to Vietnam’s 35.4% or Indonesia’s 24.6%. Consequently, our competitiveness ranking (World Economic Forum) fell from 48 in 2000 to 71 in 2006 under Arroyo’s watch.

- Asian Development Bank (ADB) itself revealed that the domestic investment rate of the Philippines has dropped from 19% in 2001 to a record low of 14.8% in 2006 while those of its neighbors have continued to rank from 20% to 40%.

= Exodus-driven growth. During her campaign to be installed as president in 2004, Arroyo promised to generate 1-million jobs a year, but not once had she been able to achieve such target. Because of her failure to generate employment, or even create a business environment conducive for employment, she instead took as economic policy the wholesale exportation of our workers abroad. The government had thus become increasingly reliant to Overseas Filipino Workers (OFW) remittances in propping-up our failing economy.

Arroyo’s economic and fiscal strategies may impress some academics and technocrats, and may even be lauded by international creditors. But unless these strategies articulate the needs of the masses who she is bound to serve, then her so-called economic feats are as irrelevant as the booming stock market is for a fish-ball vendor struggling to budget his measly income for the day. ###