The Jean Charles de Menezes campaign projected this image on the houses of Parliament on Friday of last week. They were commemorating two years since the 27-year-old Brazilian was shot dead by police. For more go to > www.justice4jean.com 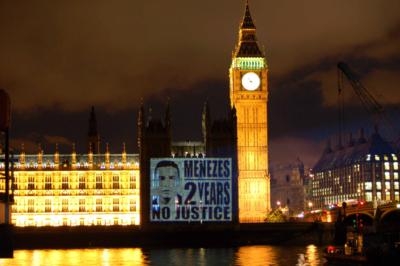 light up the house!

TWO of the most senior Scotland Yard officers involved in the events surrounding the killing of an innocent Brazilian man in Stockwell, south London, are to be criticised in an official report to be published shortly.

Andy Hayman, the overall head of counter-terrorism and intelligence, and Alan Brown, the operational commander on the day of the shooting, are criticised in a report by the police watchdog.

The Independent Police Complaints Commission (IPCC) is to publish its findings into the behaviour of Sir Ian Blair, the Met commissioner, and other senior officers over the death of Jean Charles de Menezes at Stockwell Underground station in July 2005. The 27-year-old electrician was shot by police marksmen after being mistaken for a fugitive suicide bomber.

The IPCC was asked by the de Menezes family to examine claims that Blair and other senior officers misled the public about what they knew about the shooting and when.