On Sunday, 29th July, about 1,000 fliers were handed out to local people in Canning Town advertising the fact that the world's largest arms fair is coming to their area of town in September 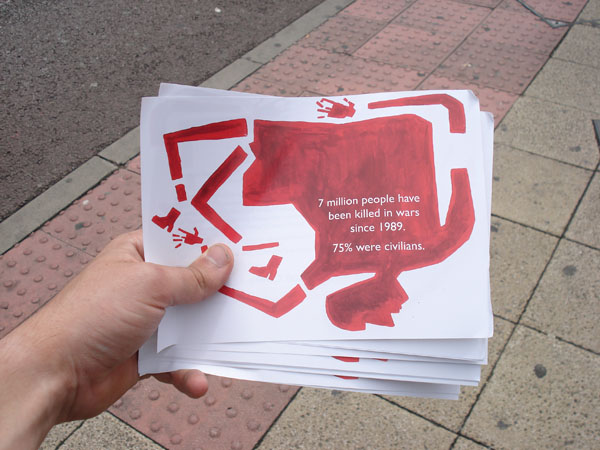 the front of the flier

For several hours on Sunday people handed out fliers explaining to people in Canning Town that DSEi (Defence System Equipment International) and the world's largest arms fair will be at the ExCeL centre from September 11-14. We received a generally warm response with several people asking how they could get more involved, or what they could do to protest the fact that this death fair was coming to their community in only just over a month.

At least 7 million people have died in wars across the globe since 1989. War will never stop whilst weapon sales are a booming global industry worth over $40 billion a year.
DSEi (Defence System Equipment International) is the world’s largest arms fair and is integral to the arms trade and global conflict.

In 2005 DSEi hosted 1,100 companies, 70 official military delegations and 20,000 visitors from across the globe. Many of the countries invited were at war, some with each other. Many were dictatorships with appalling human rights records. Many had huge national debts with populations in severe states of poverty and starvation.

There are no borders, no limitations and no morals when it comes to arms trading.

We will not let them meet without disruption and opposition. Join us and take action.

Say no to war. Say no to the arms trade.