The Space Hijackers and several anti-DSEi activists ran a stall on Brick Lane Market in East London this Sunday. The aim of the stall was to raise awareness of the worlds largest arms fair, raise funds to help us buy a tank, and invite people along to the protests on September 11th. 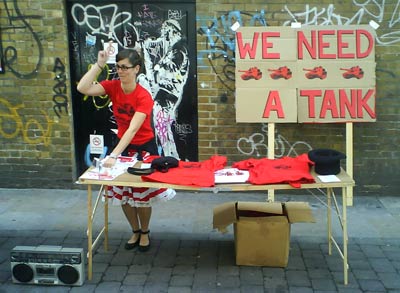 Gelatin Agent get's down to the music 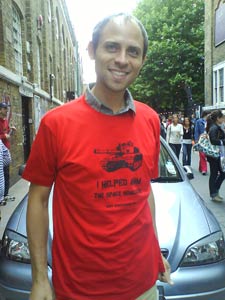 With a beautiful sign, a big box of t-shirts and flyers and a ghetto blaster we headed down to Brick Lane Market on Sunday Morning to set up our stall. No sooner had we unfolded our table, switched on the Beastie Boys and started dancing and shouting that people began congregating around picking up flyers and asking about the arms fair. Eventually a group of people who had been flyering at Canning Town (where the arms fair is) joined us, the Sun came out and we hurt our throats shouting.

We raised a few hundred pounds towards the tank, handed out hundreds of leaflets, recruited a few new hijackers and DSEi protestors and got a tan. Infact we enjoyed it so much, we may well make it a regular pitch at the market!