In the UK children of sixteen can be recruited, an age too young to legally drive a car, drink a pint, or have a credit card. School Students Against the War

http://www.ssaw.co.uk/ are a vibrant, informed organisation, growing across the U.K.. and have launched a campaign in response: 'Troops Out of Our Schools - Troops Out of Iraq'. 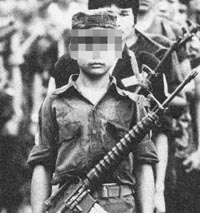 This from the man who failed to mention exactly that, which he had been responsible for, in Iraq and Afghanistan's invasions - for which, as Chancellor of the Exchequer, he had written the cheques for the UK's involvement, in the total decimation of all which can be called normality. Those elephants in the Bush-Brown meeting at Camp David and at Brown's UN., foray, were seemingly un-noticed; the horrors air-brushed out.

Brown of course stayed silent, both in opposition and since becoming
Chancellor in 1997, at one of 'the great evils of our time', the silent
holocaust which was the thirteen year embargo on Iraq - and there has not
been a squeak from him over what one could be forgiven for thinking has
become a genocide since the 2003 illegal invasion. What else can describe a
possible million dead and four million displaced and one third of the
country in absolute poverty?

There has not been a glimmer of compassion from a man who suffered the agony of watching a baby of his own lose her fight for life, not a spark of empathy of the searing grief of others, from a man whose small son suffers a serious health condition - for whom he can demand the best treatment, whilst in Iraq, Afghanistan and Palestine, parents watch in helpless heartbreak and trauma, because little or none is available.

The man who wants to '..eradicate the great evils of our time ..' is
especially focussed on Africa (in a patronising hark back to the 'penny for
a black baby', sort of way) so presumably is against that rife in parts of
that continent, one of the world's great shames, child soldiers.

Listen out then. His predecessor Tony ('I'm a pretty straight sort of guy') Blair and
now Brown preside over the only country in the European Union, where it is
legal for the armed forces to recruit under eighteens. Further, recruiters
arrive at schools unannouced to the pupils, on recruiting drives at periods
such as assembly, where attendance is compulsory and sanctions can be taken
against them for leaving in protest, since they can be accused of turancy,
'bunking off'.

In the UK children of sixteen can be recruited, an age too young to legally drive a car, drink a pint, or have a credit card. School Students Against the War

http://www.ssaw.co.uk/ are a vibrant, informed organisation, growing across the U.K.. and have launched a campaign in response: 'Troops Out of Our Schools - Troops Out of Iraq'.

SSAW's Sam Fairburn says they ' demand students right to attend school without fear of being recruited into a discredited government's killing machine.' This fear
is well founded since, state SSAW : ' Recruiters typically target economically deprived areas', with little hope of meaningful - if any - employment. Moreover, via the school Cadet Forces, children as young (and impressionable) as twelve are subject to the forces recruitment officers sales pitch.

In Gordon Brown's native Scotland, the Scottish Teaching Union has passed a Motion demanding the end of recruitment in schools. In a shameful, shocking allied development, SSAW have discovered that the Ministry of Defence has employed an agency called 'Kids Connections', to write forty lesson plans for use in UK schools this September, entitled: 'The Defence Dynamics Project'. A plan which is: ' A blatant propaganda excercise justifying the invasions and occupation of Iraq.'

SSAW point out that: 'Included in their 'Fact Sheet' about Iraq is the following: "Over 150 healthcare facilities completed and many more are in progress. 20 hospitals rehabilitated. 750 nurses trained in maternal and child health services. Immunisation programme re-started in 2003."

The real facts are to be found in the report released this week by the NGO
Coordination Committee in Iraq (made up of 80 international NGO's, 200 Iraqi
NGO's and supported by OXFAM) which states:

"4 million Iraqis are 'food-insecure' and in dire need of humanitarian
assistance. More than 2 million people are displaced inside Iraq and over 2
million have fled abroad, the fastest growing refugee crisis in the world. Child
malnutrition has risen from 19% before the US-led invasion in 2003 to 28%
now.

Media queries addressed to Kids Connections were referred to the Ministry of
Defence. THE M.O.D., asked into what part of the curriculum the Defence
Dynamics Project would be slotted (citizenship? colonialism? popular
mechanics? target practice?) the response was that it was: ' mapped to
support various subjects across the curriculum, including english, maths and
science.'

SSAW organised a picket outside Kids Connections on August 2nd., and handed
in a letter, signed by veteran former M.P., author and broadcaster Tony Benn
and Stop the War Convenor, Lindsey German, demanding that Kids Connections
terminate their links with the Ministry of Defence and that the Defence Dynamics Project not be introduced in to schools.

For those who are inclined to picket or express their views in writing, Kids
Connections are at : 114-118 Parkway, Camden Town, London, NWI.

SSAW also has a petition to end recruiting in schools to be presented to Downing
Street in October.To add your name visit their website and click on 'Resources'. The shame of Britain's child soldiers must be ended.

Felicity Arbuthnot is a print and broadcast journalist specialising in environmental and social issues with special knowledge of Iraq. She is author, with Nikki van der Gaag of 'Baghdad' in the Great Cities series, for World Almanac Books (1996) and was Senior Researcher for two award winning documentaries on Iraq and currently working on another documentary on Iraq.