As usual at the start of the ride the police were threatening riders with sound systems with arrest if they dare to play them within the SOCPA zone around Parliament. Something they do not do to motorists with sound systems. The photos show police hassling a rider with a sound system. 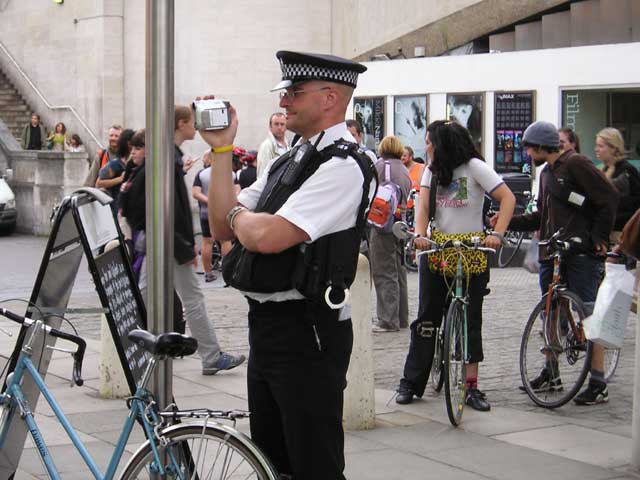 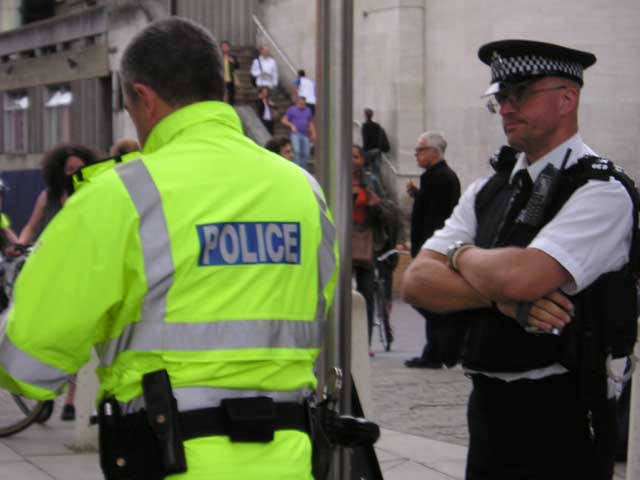 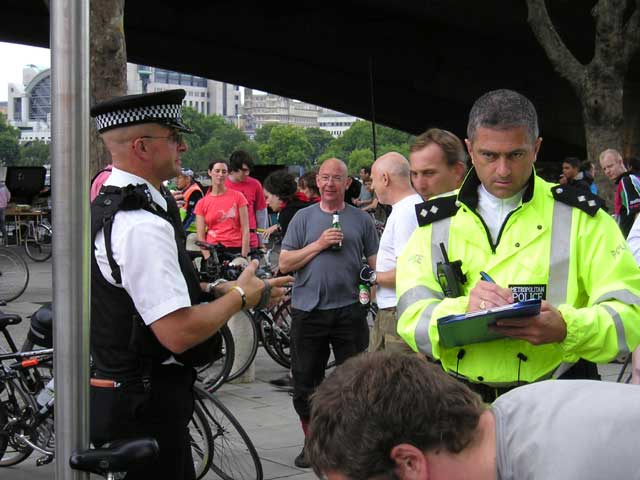 The ride was fast with an interesting route and no stops at junctions for a change. Everything went well until the police decided to pull over a sound system in Park Lane towards the end of the ride, well outside of the SOCPA zone. It later emerged that they did this because 'offensive music' was being played. This is not the first time these self-appointed arbiters of public morality have tried to censor music during a CM ride.

The raw video is over two hours long and was made with a helmet cam. It has been edited down into two parts totaling 11 minutes.

While it is somewhat encouraging that the police seem to want to be included in the monthly coincidental cycle rides,somewhat a new event in it`s 13 year history,I`d like to voice my concerns in thier behaviour. In 13 years there have been very little confrontation on the mass,however since the met bloc has joined it has become more agressive and surely unlawful. On julys mass the met bloc persisted in blockading roads and generally causing mayhem to motorists. In Park Lane they decided to "pull over" the sound system to bully the rider into turning off the sound system,firstly under the guise that it was in the SOPCA zone,when it was pointed out that it wasn`t in the SOPCA zone the rider was told that the music was deemed offensive. Yes facts can offend as all was being played was songs condeming the killing of innocents in Iraq,afganistan. Due to the solidarity of fellow cyclists,who stopped to witness this harassment of a peaceful cyclist,the whole southbound carrageway of Park Lane ground to a halt,culminating in tail backs around Marble arch,Edgware Rd,Bayswater Rd,Oxford St and even the northbound carrageway of Park Lane. A feat that the mass has never done. Are the Met bloc out to subvert. Further on at Trafalgar Sq I witnessed the sound system cyclist being told that he faced arrest for playing music in the SOPCA zone. When it was pointed out to the member of the Met bloc that in fact the rider was outside the zone,the officer disappeared! My I suggest that if the Met insist on "facilitating" the ride,a coincidence my I add,no orginisers no leaders. In fact it`s becoming increasingly obvious to me that the ones leading the ride are the Met Police. Surely this makes them liable to arrest for orginising. Maybe they should gen themselves up on the law before trying to wrongfully arrest people. Sadly,I wonder if these bully boy tactics are scaring cyclists away from what is a peaceable community spirited ride. I noticed the Met Bloc getting close to the sound system talking of snatching it. Well done to the solidarity of other cyclists forming a barrier around the sound system. I`d also like to suggest that some of the Met bloc take a cycling course as rubbing the backs of fellow cyclists wheels can result in very serious injury. Power to the people. See you all on the 14th @ 7.30am for a ride to climate camp.