Four German activists have been arrested on suspicion of being members or supporters of an alleged 'terrorist organisation' (the so-called Section 129a) [lawyers' press release]. The German federal police suspect that Militante Gruppe (MG or Militant Group) was behind several arson attacks against police and army vehicles since the group surfaced in 2001 [Federal Prosecution's press release]. The direct actions are said to have included an attack on German federal police vehicles to protest against their involvement in immigration deportations and another in response to the G8 raids earlier this year. If found guilty, the four could face up to 10 years in prison. Another three men have been accused but not arrested.

A number of solidarity actions have already taken place, including a demo in Berlin last Wednesday (August 1st) and another at the prison where the four are held on Sunday (August 5th). A Germany-wide protest against police repression is planned for September 15th [call], while many solidarity protests and actions are expected throughout the world. 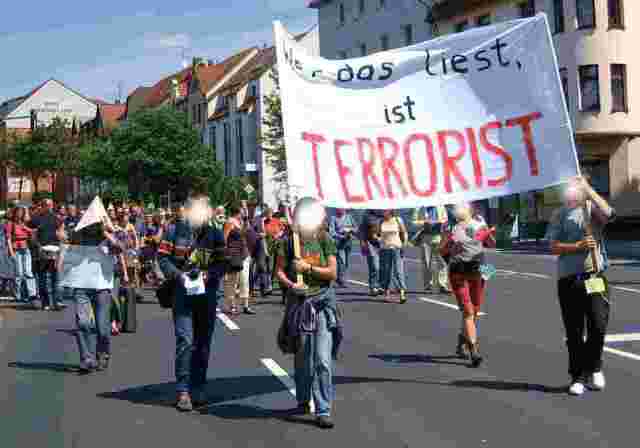 "everyone who reads this is a terrorist"

Following a year-long Section 129a investigation, three activists were arrested on 30-31 July, 2007, while allegedly attempting to set fire to four army trucks on a MAN AG site in Brandenburg. The three, identified as Florian L. and Oliver R., both 35, and 46-year-old Axel H., are now charged with "belonging to a terrorist organisation", Militante Gruppe, as well as an attempted arson attack. On July 31st, police searched the homes of four other suspects living in Berlin and one of them, Andrej H., 36, was arrested on suspicion of "supporting MG".

The lawyers acting on behalf of the seven said in a statement, "The charges of terrorism against the 7 people accused in this new 129a case are speculative and not tenable. The arrests of the four are a scandal."

"The current proceedings, especially the motivation of the warrants, show once again how the law enforcement agencies in Germany use anti-terror laws against certain suspicious people, in total disproportion and without any constitutional scruple."

In normal constitutional court proceedings, the three Brandenburg suspects would have been charged with attempted arson under Section 306 of the Criminal Code and not remanded in custody. Declaring attempted arson of three vehicles without endangering anyone as terrorism obviously has political motivations. Even the broadly defined Section 129a (membership of a terrorist organisation) requires that the acts are meant to "damage a state or international body considerably through their nature or their effects."

Prior to the G8 summit in Heiligendamm in June 2007, the Federal Prosecutor had investigated several MG members and searched their houses, using Section 129a, but found no evidence to use against them. The raids then sparked a wave or protests worldwide and were even condemned by many mainstream human and civil rights organisations.

Section 129a was originally added to the Criminal Code in response to the actions of the Red Army Faction (RAF, also known as the Baader-Meinhof Group) in the 1970s. Its main purpose is to "protect public safety and the order of the state" by declaring the planning stage as part of the "illegal activity".

According to the Federal Prosecution itself, police have no sufficient knowledge about the three Brandensurg arrestees. This, however, "does not go against the assumption of a possible suspicion of membership in a terrorist organisation." From the writings of the MG, they concluded, "it can be concluded that this fits the expectations from their members."

The arbitrariness of the arrests can be seen more clearly in the case of the fourth arrestee, Andrej H. Police have assumed a link based merely on observations that there has been a contact between him and one of the Brandenburg suspects. Further, the only two meetings between them are supposed to have taken place "conspiratorially". Police do not know anything about what the meetings in February and April 2007 were about. Yet, they have concluded that the "conspiratorial behaviour between H and L can only be explained that L is also part of the terrorist organisation MG" and that "the conspiratorially agreed-upon meetings are related to this" (the organisation). One of the 'conspiratorial things' apparently was that Andrej had forgotten his mobile phone at home.

Andrej H., a sociologist whose work focused on gentrification, tenants' rights and social cuts, is also supposed to have published an academic article in 1998, in which he used phrases and words that can be found in MG texts. "The frequency of the correspondence is conspicuous and cannot be explained by thematic correspondences," they concluded. "As a political scientist," they added, he is "intellectually capable of writing the technically difficult texts that MG uses". What's more, he "has access to libraries which he can use inconspicuously to make the needed investigations for the MG."

Andrej is also known as a political activist who has participated in many local and international events, including recently the G8 Independent Media Centre in Rostock. In his arrest warrant, it was mentioned that he was involved in "staging the left-wing protests against the G8" (in Germany, June 2007).

At a solidarity demo in the city of Fulda on August 4th, the 400 or so participants, mostly from the Attac Summer Academy, were chanting throughout such slogans as "We are all 129a" and "we are all terrorists". Around 40 of them then 'reported themselves' to the police officer in charge since they carried the same reasons for suspicion that were brought up against Andrej. In a "self-incrimination under 129a", they declared that

the correct wikipedia link is

we have not managed for a while to put together a summary of what is
happening concerning 'our' terrorism case. Unfortunately there was no
more English language coverage in the media and we are moving closer to
our personal limits when it comes to keeping up with the pace of this
campaign. Now, near the end of the year when hopefully most of you and
us will find the time to sit back and relax, I'd like to send you a
short email with the latest developments.

Also please note the information at the end of this email about a
lecture in English language I will be giving next Thursday in Berlin
during the CCC Congress which will be streamed via internet and later
will be ready for download.

We would also like to use the opportunity to ask you one more time to
consider donating for the campaign. We have received an amazing lot of
donations, thank you all. Unfortunately law cases are expensive - as you
all know - and we continue to depend on more donations to be able to pay
an group of very dedicated lawyers, and support the seven accused plus
close to 20 witnesses. In German law they are all threatened with up to
six months of coercive detention and/or high fines if they refuse to
testify against their friends, collegues or (former) room mates.

The great news is that already Nov 28 the other three who were arrested
in July were set free. Arrest warrant still in place, but the Federal
High court decided that they should be let out of prison on bail. It was
not easy to raise the ¤90.000 Euro, but one day later everyone set free.

The other important detail is that the court in this same decision
decided that all seven are no longer accused of forming a terrorist
organisation. An intense public debate in most of the big German media
preceded this, discussing how a terrorist organisation can and should be
defined today. Most statements after the decision by the High Court
agreed with us that this constitutes another 'slap in the face' of the
Federal Prosecutor. On the other hand the court also decided that all
seven are now to be prosecuted for forming a 'militant organisation',
§129 instead of §129a of the German penal code, possible sentences up to
5 instead of up to 10 years of prison.

Not what we had hoped for, but a lot more than most had thought possible.

During this time we have extended our campaign calling for the end to
_all_ $129a-proceedings on the grounds that these inquiries are mainly
used to intimidate and spy on activist movements. Several other
investigations under this article against activists are being conducted.

// For background on the German anti-terrorim article §129a see again
"Crime by association - Terrorist law used to criminalise critical
research", by Statewatch (

We have organised two larger events in Berlin in November and December
that attracted large audiences. Both were recorded and are online - for
those of you who do understand German. One drew the parallel to the case
against the american artist Steve Kurtz, member of the Critical Art
Ensemble and accused of bioterrorism in 2004 (details at

http://www.caedefensefund.org). We showed excerpts of the excellent
documentary by Lynn Hershman 'Strange Culture',

http://strangeculture.net/ and if you have the chance to see it don't
miss it!

The other event, "We are all terrorists", took place in the Volksbühne
theatre. Actors did a reading of excerpts of adapted case files in the
beginning and then suspects in four different terrorism cases against
political activists presented details from their respective cases. Often
similar absurdities such as it being considered suspicious that a group
of young antifascists did *not* participate in the protests against the
G8, did *not* mention certain issues in their phone calls, did *not*
discuss antimilitarim - they, too, are accused of setting fire to army
vehicles. Again only in German, but very much worthwhile watching.


We'd love to have the capacities to translate all of this into English,
but for the moment we don't.
If anyone can think of possible funding for translations/subtitling of
any of this please let us know.

Details about documentation will be published soon at

Last but not least we prolongued the deadline for our contest "What is
terrorism".
You can still send in / upload your contributions with *your* definition
of terrorism until Feb 15! See other contributions at

http://einstellung.so36.net/en/what-is-terror/contributions and please
forward this information.