Immigration Minister 'arrested' for locking up migrants at Campsfield

Members of the Campaign to Close Campsfield held a very successful demonstration yesterday (7 August) outside the Campsfield immigrant prison, in an effort to "redress the balance of reportage" on the detainees escape last Saturday and to show the detainees inside that "not everyone goes along with the mood of hysteria." There were loud shouts of "Freedom!" and "Thank you very much!" from the main accommodation block, which protesters addressed using a megaphone across the prison's unused, weed-grown football pitch. 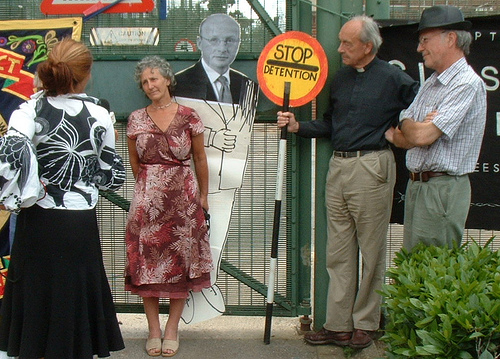 The following is a message from the Campaign to Close Campsfield's Bob Hughes:


Quite a few members of the local media also turned up. The event was featured on regional BBC and ITV and on local radio stations.

One journalist told us that she had done extensive interviews in the immediate locality and "a good half" of the people she'd spoken to were sympathetic towards the escapees, and even wished them luck. This included people living in the houses adjoining the prison, where the media have generally focused on residents who play along with the "escaped criminals" story (extra locks etc).

Less attention is paid to the nature of the crimes the escapees are said to have committed. All that the police will say (and perhaps are able to say because of poor communication with the Borders and Immigration Agency) is that none of them had done anything very bad.

Were it to be revealed that most of the escapees had done little more than failing to return their library books, the official reaction might be seen as a very expensive pantomime, played out for no honourable purpose, at public expense.

THE REAL STORY IS CRIMINALISATION

Since New Labour came to power it has created over 1,000 new crimes. These in particular criminalise the weakest members of society, especially migrants.

According to Asylum Welcome and Bail for Immigration Detainees, "A very high proportion of the so-called criminals held in Campsfield have been jailed for the new 'crime' of using false documents to enter the country. Making this a crime has brought fear back into the lives of thousands of legitimate, established Oxfordshire residents who are now terrified of falling the wrong side of the law in some way. And it blatantly violates Article 31 of the 1951 United Nations Convention on Refugees, which says governments must not penalise refugees who arrive on false papers.

It was for this infringement of international law that we arrested Liam Byrne during the demonstration. It turned out that we had, in fact, only arrested a cardboard cutout. But those who know the Minister say it is an easy mistake to make and, at a mere 2 mm thick, our cutout is certainly not as thick as the original. And a few more people now know what the ex-Anderson consultant, Reid protegée and parliamentary neophyte looks like.

Here is some information about him:
"Rising starsehole: Liam Byrne came into parliament on a 'get tough' campaign against asylum seekers. Now he's the new immigration minister" by Solomon Hughes; Red Pepper July 2006