Following the acquittal of seven of the eight Prestwick protesters at Ayr Sheriff Court due to inadequacies in the Crown case a prominent expert witness testified that collusion in war crime was relevant to the context of the trial. 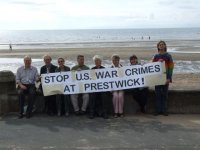 Paul Rogers, Professor of Peace Studies at Bradford University told the court that war crime by Israel was very much an issue at the time of the incident at the airport. Israel had been breaching international law by targeting its air strikes in Lebanon at areas and installations liable to contain civilians. They had asked the US for an emergency top-up supply of bombs. US planes delivering these armaments would need a fuel stop-over in the UK and Prestwick was one of the options.

The accused activists carried out inspections of Prestwick Airport on the night of the 6th/7th August last year to look for evidence of US munitions bound for Israel for use in the Lebanon conflict. Facing trial were Matt Bury (50) from Somerset, Sarah Lasenby (68) from Oxford, Jean Oliver (48) and Douglas Shaw (56), both from Biggar, Olivia Agate (65) from Helensburgh, Marcus Armstrong (46) from Milton Keynes, Chris Bluemel (25) from Southampton, and Angie Zelter (55) from Cromer.

All eight accused were facing a charge of trespass, or in the case of Olivia, a charge of aiding and abetting a trespass. At the end of the prosecution case, a defence submission that there was no case to answer on that charge was accepted by Sheriff Montgomery. This left Angie, Marcus and Chris facing the other charge, that of being on an aircraft without permission. The Crown had already accepted that in the case of Angie there was lack of identification and the Sheriff decided this was also true for Chris. He was however persuaded by the prosecution argument that given the circumstances it could be inferred that Marcus did not have the required permission.

Marcus’ trial has been adjourned until Monday.

Angie said: "I am delighted that when Paul Rogers gave his evidence the real issue got the attention of the court at long last. Since there was good reason to suspect that Prestwick was colluding in war crime we had every justification for doing what we did. The big worry is that it was left to ordinary citizens like us to act when there were whole layers which should have taken responsibility, from the Scottish Executive, through the police, down to the airport authorities and the civilian contractors. All the way down it was the same sorry story. Not my problem, nothing to do with me, I am just doing my job. Our whole society needs to be educated in the Nuremberg Principles and their insistence on the duty of everyone to recognise their responsibility and act to uphold international law."