Climate Camp activists met at a half dozen locations around London this afternoon, moving during the evening in vans to various sites near Heathrow.

Just after eleven the groups converged on a large field opposite the airport. Within minute tripods were erected and occupied with a large banner reading "Climate Camp, No Airport Expansion" slung between the two. 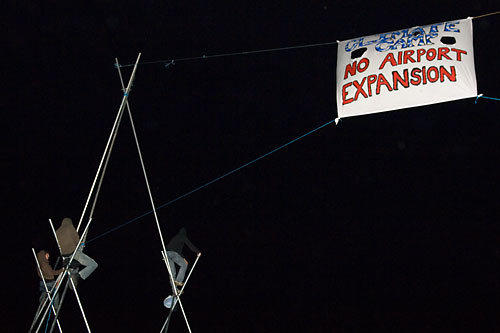 Tripods over the camp (1) 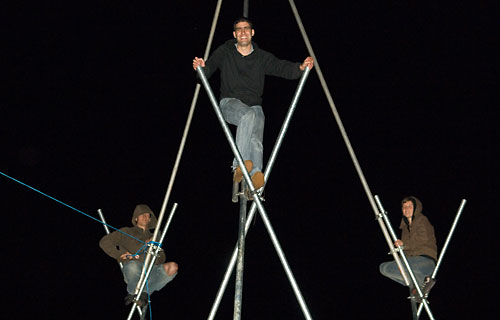 Tripods over the camp (2) 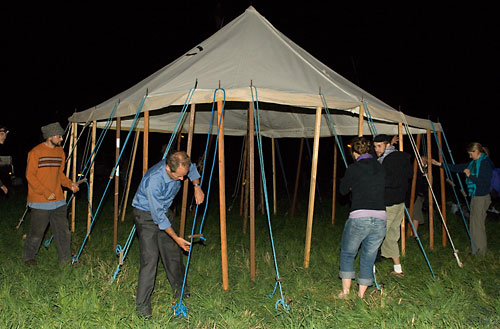 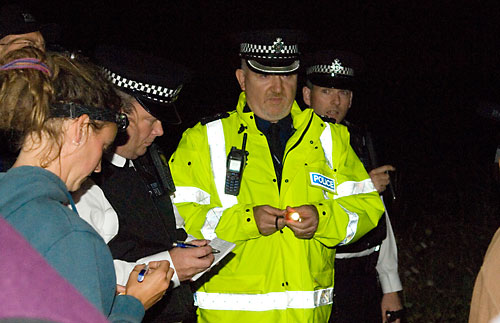 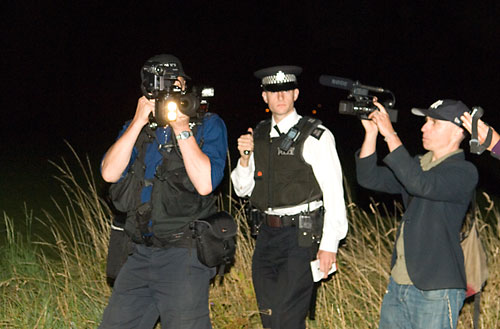 Amateur FIT team give it their best shot

http://maps.google.co.uk/maps?q=sipson&ie=UTF-8&oe=UTF-8&rls=org.mozilla:en-US:official&client=firefox-a&um=1&sa=N&tab=wl) , half way between Sipson and Harlington villages. Vans were being quickly unloaded, tape was marking out the barrios and tents were being erected. Despite the pitch darkness kitchens were being organised and a village began to take place.

Midnight saw the arrival of the first police - does overtime kick in at a higher rate after the witching hour? Five vans lined up outside the west gate, a couple more outside the east gate and several saloons denoting the presence of senior officers.

A phalanx of cops poured on to the site and demanded to speak to the leaders. A quick call out for people to the main gate seemed to overwhelm them and they beat a hasty retreat back to the vans, a fairly low grade FIT team videoing and stumbling over the bracken as it went.

The mood on the site is one of great elation. After months of planning and anticipation the day has finally arrived and the site is taken.

top to see the start of a beautiful movement...once again let the walls of babylon tremble to the music of many voices...may the climate camp 2007 be a space of healing on the wounds of the earth...love+light

nice to see it all seems to be running smoothly so far, and thanks for the report...but, obvious word of caution, we don't need to see people's faces in photos. it only takes a couple of minutes to blur them. leave identifying people to the FIT, eh?
x

It's been suggested (Usenet) that the land being used for the camp is with the permission and agreement of the Landowner. Is this true? Be interesting, if it is, to see how much force the Police use to move people who have permission to be there ......... :)

Thank you! You've put a big wide grin on my face this morning - great to see piccies of the big fat doubledecker tripods and marquees going up. Fantastic site location too. We're gonna have fun!!! See you all down there very shortly for an inspiring week of doing it ourselves!