On Saturday, August at 11, 12pm EST, the Providence I.W.W. organized a march on Jackie's Galaxy, which is a restaurant chain that is being supplied by HWH in New York City, a supplier who is notorious for its slave labor conditions of up to 110 hours per week without basic labor rights (minimum wage and overtime).
Roughly 30-40 wobblies and supporters (including Providence and Boston SDSers) were marching towards Jackie's Galaxy in North Providence when the police began following them en mass. They told the marches to move to the sidewalk, while this was initially ignored, the marchers listened to the police and began slowly moving to the sidewalk.
The police then surrounded the marchers in their squad cars and began getting out. With the police in full force, they began attacking the marchers, one fellow worker, Alex Svoboda, was pinned down by the police during her arrest and suffered a broken and dislocated leg and ruptured blood vessel in the knee. These injuries will require at least two surgeries and extensive rehab and even then may not completely repair the damage. Jason, another wob, was arrested in during the police' attack. Ashley, a supporter from Boston, was also severely maced during the attack, suffered chemical burns and required medical treatment. 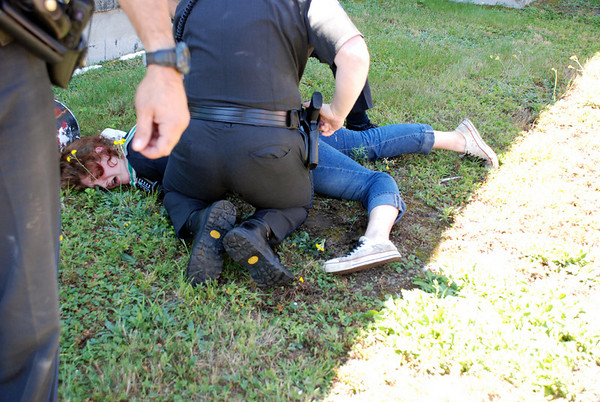 Despite this, the marchers continued on to Jackie's Galaxy and eventually spoke with the owner who at first promised he had switched suppliers and now denies doing business with HWH although he has no documentation to prove either claim. Business at Jackie's Galaxy ceased completely during the duration of the action and most bystanders were outraged that Jackie's would support the crimes of HWH/Dragonland.
The Providence wobblies and other supporters of workers' rights will continue their pressure on Jackies Galaxy until they stop doing business with the slave labor shop HWH/Dragonland or until basic rights, including the right to organize, are instated at HWH/Dragonland.
In the meantime they need your support! Alex Svoboda is charged with 3 felony counts of assaulting and office as well as two misdemeanors and will be unable to work for a significant period time as a result of her injuries. Money will be needed to provide Alex and Jason with legal support and also to help with the medical bills and lose of income Alex will suffer as a result of the brutality of the North Providence Police. Please send in any donation that you, or your organization can afford to the Providence General Membership Branch (address below) or contact Mark Bray at 201-669-0714 or Billy Randel at 646-645-6284.
You can also do your part at pressuring the Mayor and Police Chief of North Providence (contact info below) to at the very least, formally apologizing to the marchers, dropping all baseless charges and paying for the injuries and lose of income that were unjustly caused.
Photos of the action and the brutal assault can be found here: