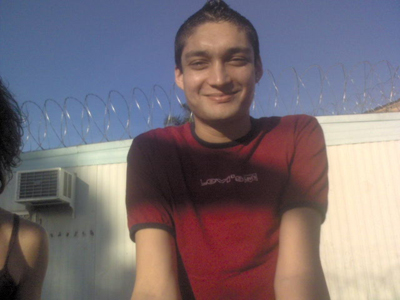 Ali is an International Student from Pakistan who was incarcerated in Villawood detention centre 2.5 years ago after being found working on a Bridging Visa.

Ali met Julio Lorenzo in Villawood and fell in love. Julio is now out of Villawood and visits Ali all the time. The Australian Government refuses to acknowledge Ali will be persecuted if he returns to Pakistan. His family has threatened to kill him. Pakistani civil law punishes gay sex with jail terms of between two years and life. Under sharia law, homosexuals can face 100 lashes or death by stoning.

Ali is also afraid of other detainees. “He cops a lot of homophobia from the other detainees,” as Community Action Against Homophobia (CAAH) spokesperson Farida Iqbal explained to the Australian media. “He stays in his room most days because he’s scared of the other men’s reaction. He’s suffering immensely. But what he fears most is being sent back to Pakistan. He will be severely persecuted if he is deported.”

Ali is also suing the federal government and the management at NSW’s Villawood Detention Centre for failing in their duty of care. He became addicted to heroin while at Villawood. He also attempted suicide when first detained at the centre in January 2005. Initially placed on massive doses of anti-depressants in a minimum security section, Humayun was transferred to a maximum security section of the detention centre and taken off all psychiatric medication over a four to six-week period. CAAH also allege that guards provided by Global Solutions Limited, the company that manages Villawood Detention Centre, offered to sell Humayun both heroin and cannabis.

Ali is currently facing deportation and protests have been held outside Villawood Detention Centre to prevent this.