Around 7.30pm on Tuesday, after a peaceful opening day to the Camp for
Climate Action, approximately thirty police, backed by officers in riot
gear, attempted to raid the camp. They entered the camp without warning,
carrying cans of what appeared to be CS gas.

With their hands in the air, protesters formed a human barrier and blocked
the police, before peacefully escorting them off the site. 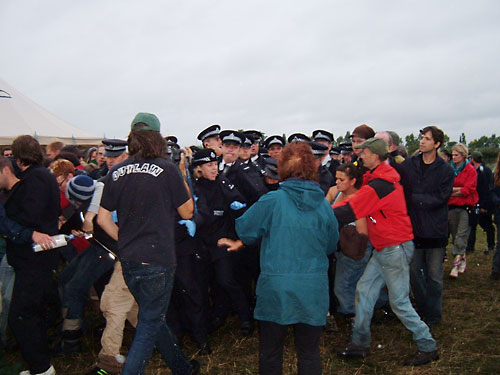 This raid was completely unannounced, and no reason has been given as to
why it occurred. It was clearly planned in advance. Riot vans assembled in
the hour leading up, and ambulances were called to be on standby. The
police waited until all the media had left, and then blocked journalists
from returning to cover the stand-off.

Police then prevented people, including local residents wanting to show
support, from coming to the site.

"There is no reason for so many officers to come on site when things are completely calm and peaceful. This was a clear attempt to provoke us. Yet not one of us rose to the bait. This is a peaceful protest. We are not and we will not be the people that the police and the Evening Standard say we are" said Alice Coterley.

Police had previously claimed that they only wanted and needed a patrol of four community police officers, which protesters had allowed on site without incident.

During the attempted raid, an officer, (UC3666) completely unprovoked,
punched one of the people forming the human barrier. The officer was
immediately removed from the site by a senior colleague.

One police officer was heard to say that the raid had been carried out by the Forward Intelligence Team, without prior consultation with senior command.

Police have currently pulled their forces away from the camp, and
everything is now peaceful. Protesters are nevertheless worried that this was an attempt to scare people from coming to the camp.

The calm atmosphere at the camp has now resumed and the programme of
workshops will continue as planned.