To read the news coming out of Climate Camp you'd think it was all doom and gloom. Police blockade roads, supplies have to be carried along the lane, police invade the site, police set up traps and police lead campers into the injunction zone.

There's a thread running here of course, and it's that the cops and their bosses are doing their very best to intimidate the camp and depress the mood.

Well I'm delighted to report they're failing miserably. Everything they throw at us brings us closer together. 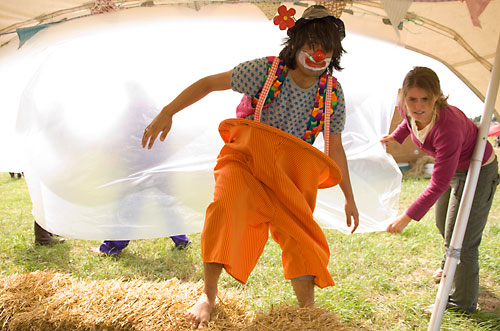 Putting the wind up a clown! 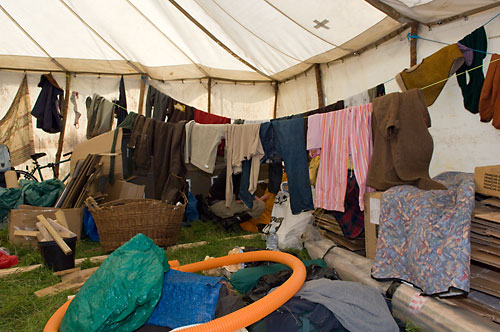 It's sunny now, but a lot of stuff needed drying earlier this week 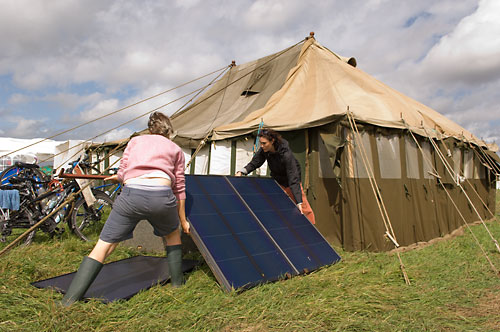 Most neighbourhoods have their own solar power 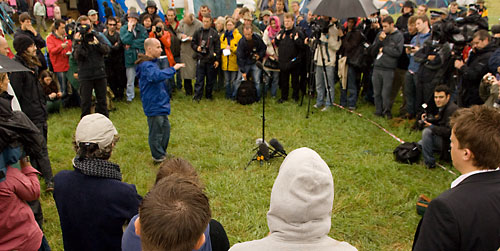 The gentlemen of the press assemble at media hour 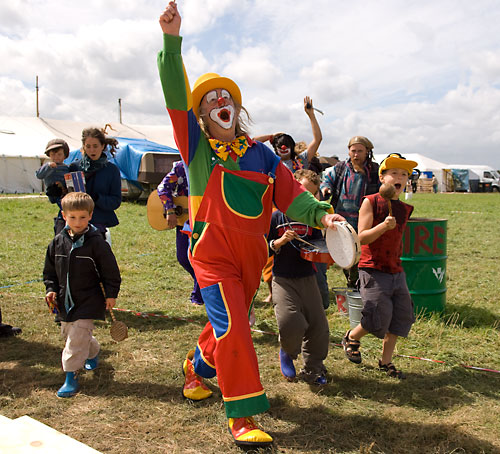 The sun comes out - and the clowns go forth.

Every so often a call goes out: "Heavy supplies arriving, help needed to unload", and there's an immediate rush to the gate to bring hay, gas or whatever is arriving across the site on barrows, in wheelie bins or simply on shoulders.

The incursion of the police on Tuesday (video:

And a spirit of co-operation reigns supreme. You see someone struggling to build a grey water system, you stop to help lift a bath and find yourself helping to finish it a couple of hours later.

It's been more than a bit windy. Some pretty big tents have blown away with the people still inside - but within seconds there's a crowd around diving on to the flapping canvas and heaving it back into place.

The infrastructure is pretty much complete. Fresh water, grey water, toilets, power are all functioning well. Apart from a central kitchen - which was the lifesaver during the set up period - each barrio now has its own kitchen situated in its communal tent. Indymedia has a fully functioning public access tent, as well as video and radio editing tents. We have two satellite dishes and our own (solar and wind) power supplies.

The seminars and workshops are going brilliantly and are well attended. And despite a few glitches from the usual suspects, media coverage of site is very positive, a firm endorsement of the media team's handling of the press.

(They have incidentally made a formal complaint to the Press Complaints Commission about the unsubstantiated, and unsubstantiable lies made by the Evening Standard).

Children are well catered for with a large play tent, with plenty of soft areas for the tired ones to bed down. Entertainments go on all day, the clowns at midday being especially popular (and subversive too - train 'em young :-)

Well stop that right now and come and join us.

Climate Camp is the best, most friendly, most creative place on the planet right now. We look forward to making you welcome.