SOCPA - report and film of yesterday's raid on parliament square

the greater london authority and uniformed police mounted another expensive and unilateral raid on peace protestors in parliament square yesterday morning. they were there to enforce bye-laws but there are serious questions about the legality of the raid both in terms of jurisdiction and also in arbitrariness of conditions.

just over a year ago, under 'serious organised crime and police act' legislation, police created a set of conditions on brian haw's six-year continuous demonstration in parliament square. on the basis of concerns about security, they told brian that his protest pitch must be much smaller (then enforced this in a night-time raid costing a quarter of a million pounds which later turned out to be unlawful).

as part of their conditions they also told brian that his site must always be overseen.
for this reason several supporters joined brian and began living in the square. an arbritary maximum of 20 people was set by police, but tents were tolerated as obviously there was need for shelter if people were there protesting on a permanent basis.

gordon brown seized power on june 27th and a flurry of press releases included the announcement that restrictions on protest near parliament would be lifted in his first 100 days. well, we're more than half way through and the repression seems worse than ever.

yesterday's operation saw the greater london council use bye-laws to once again curb brian's protest. over recent weeks, some new tents had arrived in the square, and some of the people in them, not connected with the peace protest in any way, began to behave anti-socially. it is unclear why these people sudenly turned up, but it gave the ken livingston the excuse to put out press releases yesterday claiming that peace protestors were defecating in the flower-beds and causing other problems. most of the mainstream media dutifully spread these lies, and gave cover to another expensive operation as, yesterday morning, a seven foot high wire fence was erected to enclose the entire square.

then police used heavy-handed tactics to remove protestors from the square. one supporter resisted by climbing into her tent and there was a stand-off before police dragged her out. another protestor blocked the road standing with her placards. strangely, it seemed that the police were anxious not to make any arrests. this certainly adds support to the theory that once again this raid was not actually lawful for two reasons, and the authorities do not want a court case to expose their misdemeanours.

first, usually bye-laws are civil matters that involve taking the 'culprit' to court and generally imposing fines. this sort of mass police action without warning is not at all typical of a bye-law breach.

secondly, it is not certain anyway that the gla have authority across the whole square. i have previously been told by both police and by a gla representative that there is a line on the parliament side of the square and the last few metres of grass (where most of brian's tents were) are actually westminster property. this is backed up by the fact that the pavement slabs mysteriously change colour in a line just infront of churchill's statue, marking the border of the two jurisdictions. when i put this question to 'group performance manager' tom middleton who represented the gla in the raid yesterday, he became quite evasive and refused to comment.

at the start of the operation, brian was told that only his single tent could remain, but as questions of human rights were brought up as well as the conflicting concerns of the police requiring the site to be manned at all times, and as more and more press and supporters turned up to witness the raid, it seems the authorities had a rethink and began to speak of 'two or three' tents. they created a small area behind brian's 3 metre wide display and said that whatever could be fitted in there would be allowed.

this all seems very arbritary. surely in a democracy these decisions should be transparent, lawful, in compliance with human rights, and proscribed by law. this on-the-hoof condition-making by a few men in suits is really not appropriate when dealing with a protest that is calling for members of our government to be tried as war criminals for their part in the pillaging, infanticide, and depleted uranium contamination of iraq.

in the face of peaceful resistance from a handful of protestors, around twenty police pushed and carried them out of the fenced area, while gla employees unceremoniously and roughly uprooted tents and dragged them to their new patch, where they dumped them without much care.

during the process, several possessions were damaged, including the groundsheet of brian's tent which was ripped.

i was told that on the 29th august a new nelson mandela statue is being revealed in the square and that mr mandela himself may be in attendance. back in 2004, just before the chinese president arrived (to supposedly receive a lecture from tony blair on human rights!), police swooped and removed brian's display in another unlawful seizure. a pattern is emerging.

gordon brown promised a lifting of restrictions. many newspapers reported that this has already happened, including the supposedly liberal broadsheet 'the independent'. gordon has not long to make good his word. for now, the protestors' anger has moved to ken livingston, who ordered yesterday's raid, and they have altered their gordon brown slogan temporarily so it now reads "ken livingston - same shit, different asshole"

there is another excellent eye-witness report at

mp4 can be viewed using the free videolan vlc player available for free download from the videolan website for all platforms. this player handles lots of different vid codec formats and is worth checking out.

there is an hour-long film 'socpa - the movie' treating the history of the new laws around protest near parliament. you can see a trailer and info about screenings at www.socpa-movie.blogspot.com

if you must use bill gates' corporate software 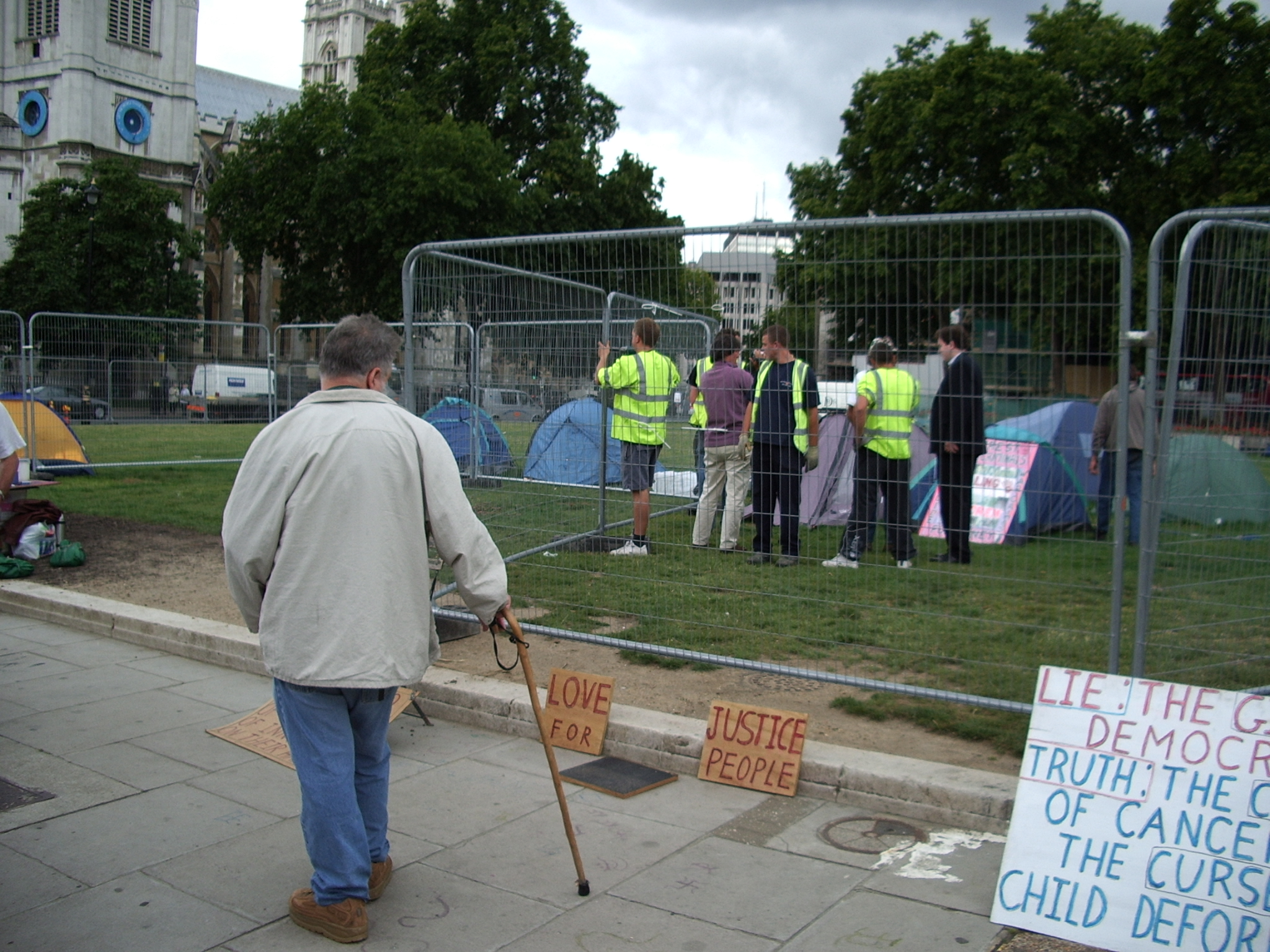 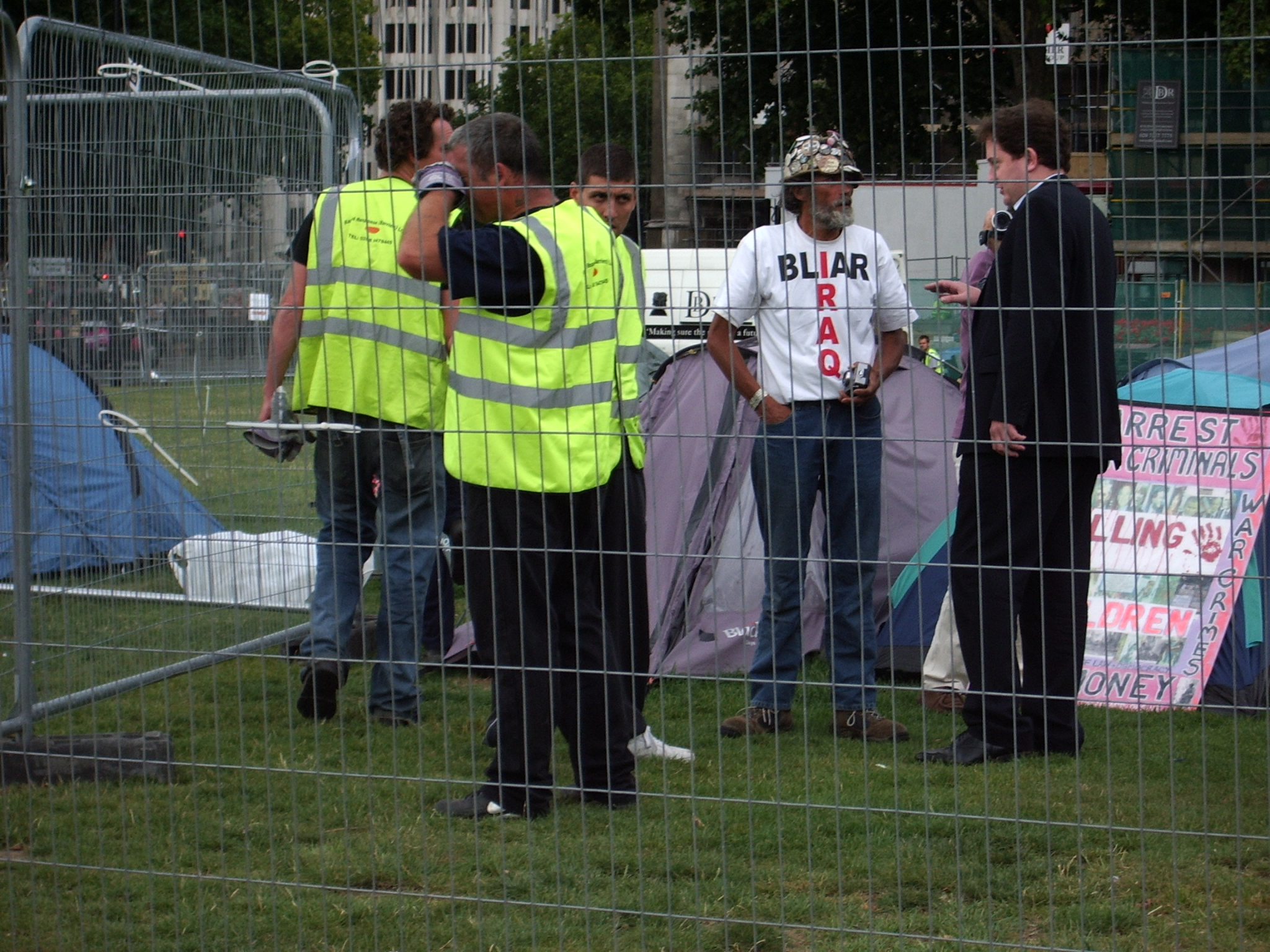 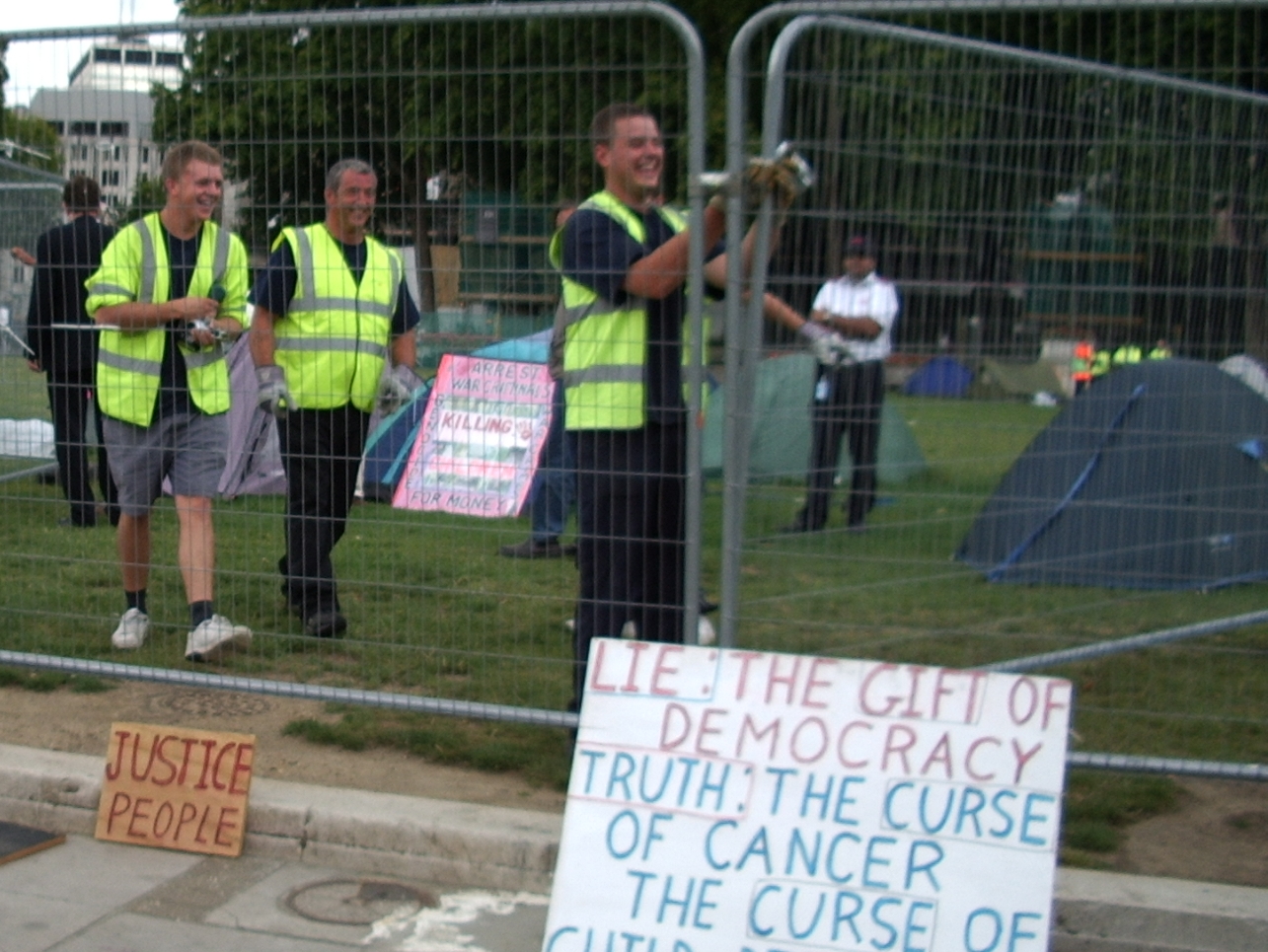 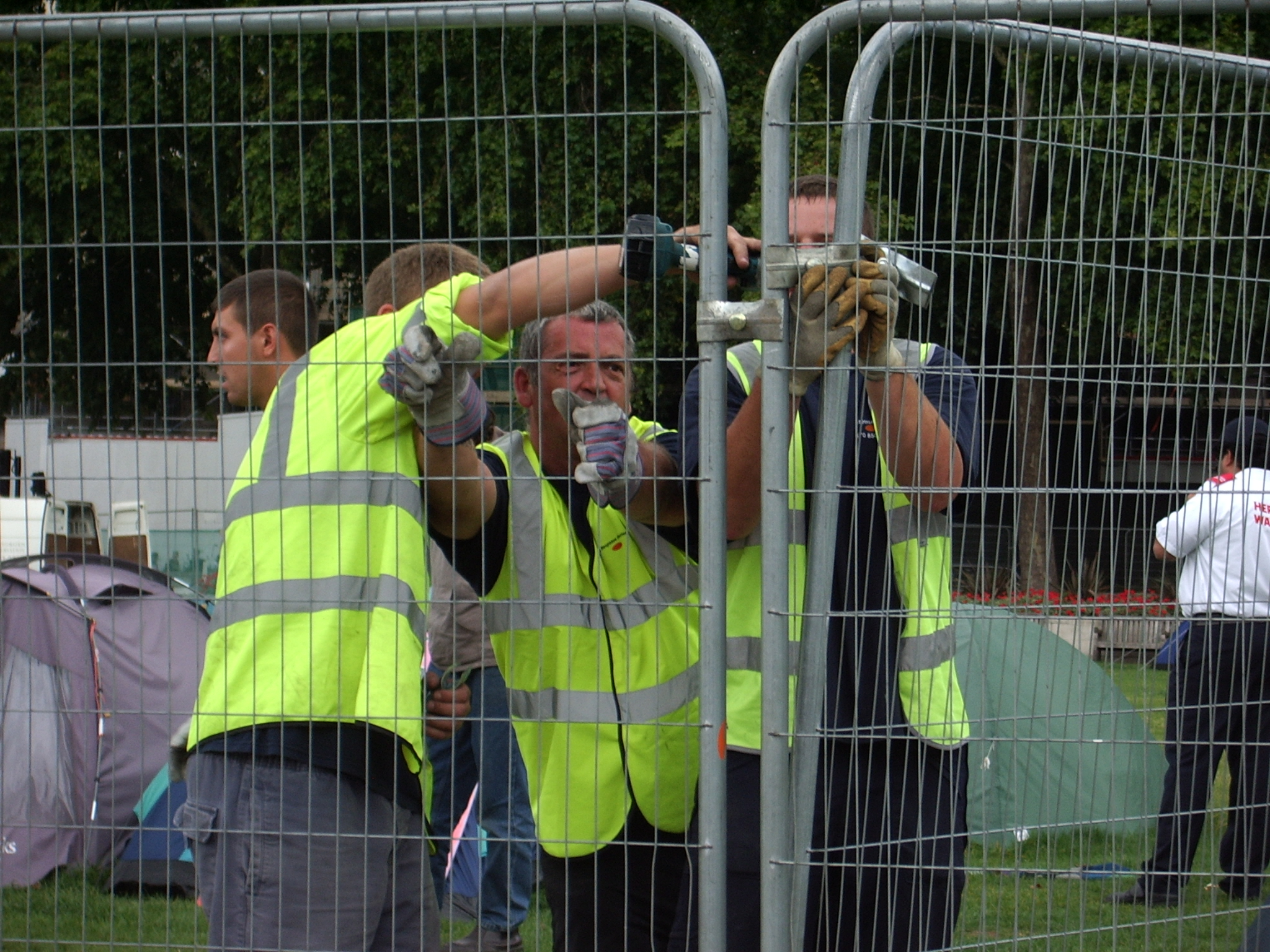 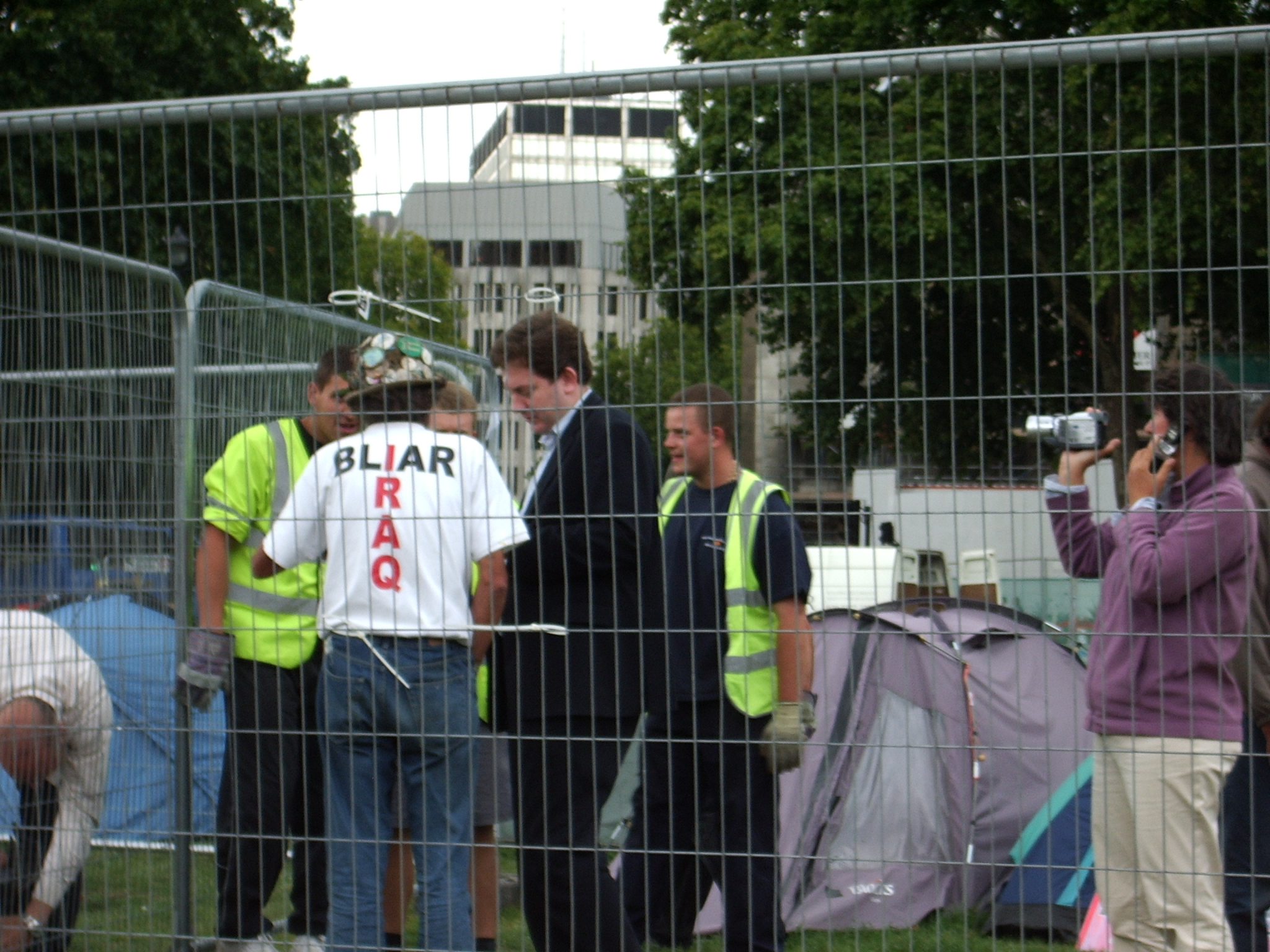 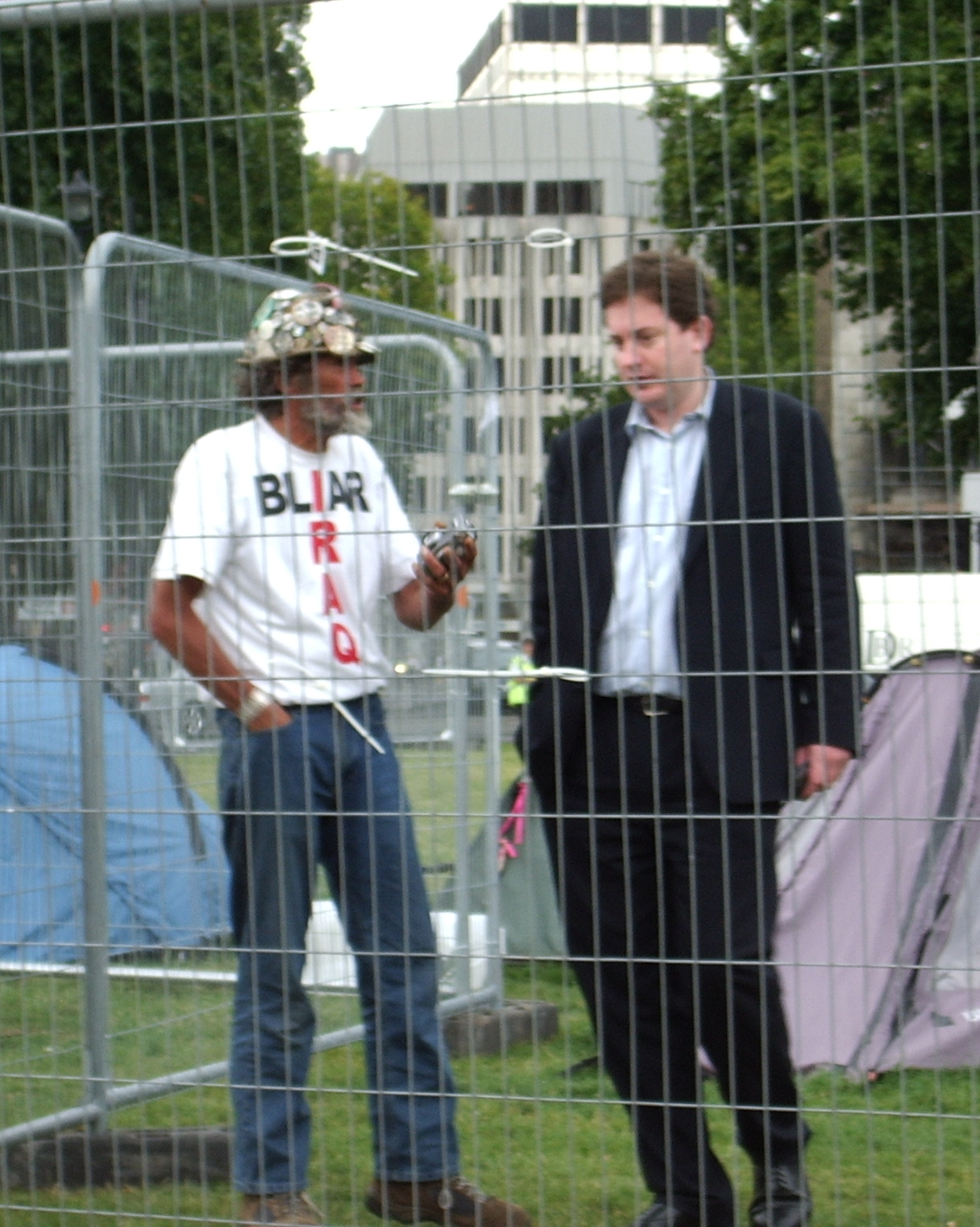 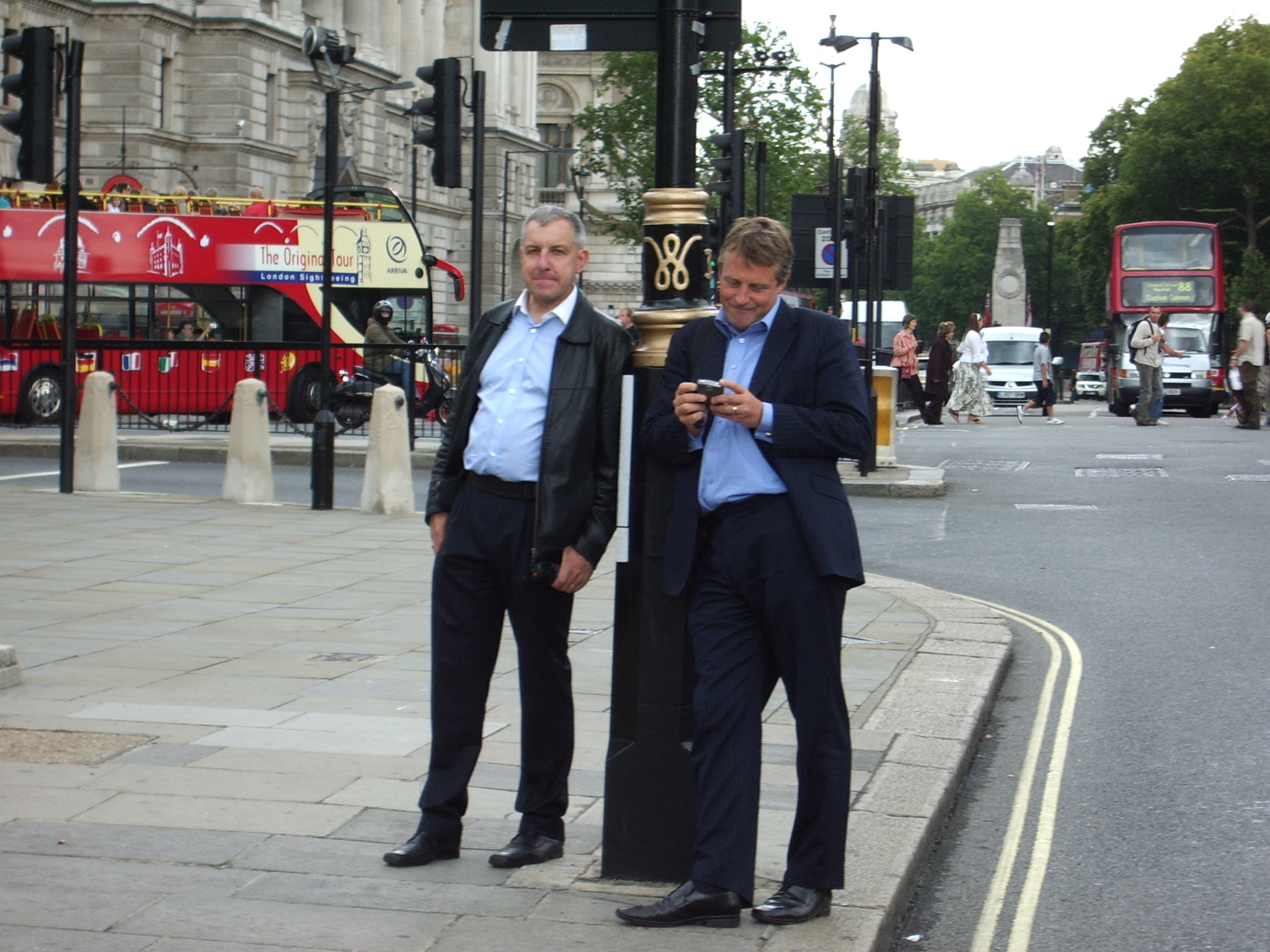 I was passing through Parliament Square on the way to my church holiday when I saw loads of police rushing onto the green. I stopped for a while, watching in amazement and eventually decided to take a few snaps. There were 2 plain-clothes guys behind me leaning on a lamppost. They seemed to be quite amused by the proceedings.