Activists from the “Camp for Climate Action” have today, 20 Aug 2007, blockaded Sizewell nuclear power station to oppose the myth that nuclear power is carbon neutral and a solution to climate change. The peaceful protest, which started 7:45 this morning, is currently disrupting traffic going in the main entrance to both Sizewell 'A' and 'B'. Sizewell, on the Suffolk coast, has been identified as a possible site for a new nuclear reactor by Government consultants recently. 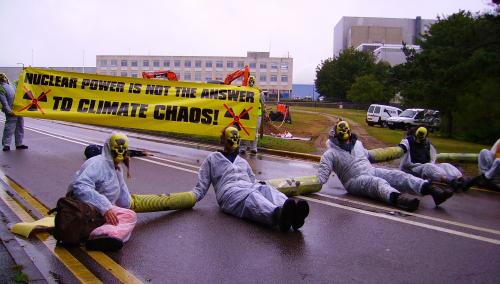 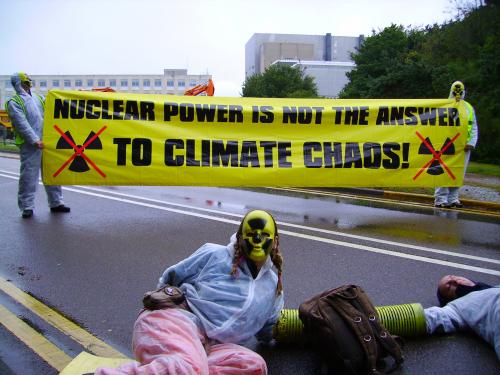 Nuclear power is not the answer to climate chaos! 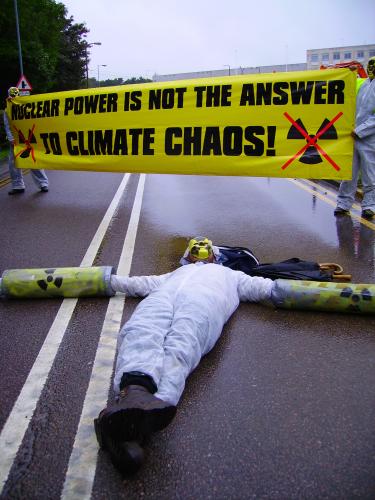 Five activists have chained themselves together across the road to the plant. They are holding banners reading “Nuclear Power is Not the Answer to Climate Chaos” and “Don't Nuke the Climate”.

The action forms part of the widely publicised Camp for Climate Action currently taking place outside Heathrow airport. The surprise blockade of Sizewell nuclear power plant was organised to oppose plans for the construction of new nuclear power stations. The British Government’s energy white paper, published in May 2007, contains proposals for the construction of a new generation of nuclear power stations, supposedly as a solution to global warming. This is a claim that the protestors strongly oppose.

At present, nuclear power is responsible for producing around 4% of the UK’s energy. The activists are concerned that the construction of new nuclear power plants will not provide a real answer to the threats posed by global warming. One of them, Adam Conway said: “If you take into account the whole life cycle of a nuclear reactor and all its fuel and waste then nuclear power is not carbon neutral. And that's before you consider the dangers and insecurities inherent in nuclear power. To expand nuclear power in response to climate change would be to jump out of the frying pan and into the fire.”

The protestors also draw attention to the as yet unsolved problem of nuclear waste generated by nuclear power, and the risk of nuclear accidents. Mell Harrison, co-ordinator of Eastern Region CND and one of the activists involved, commented: “The construction of new nuclear power plants is not only incredibly costly, it’s also very short sighted. We would be able to produce a limited amount of electricity for a couple of generations, but the coming hundreds of generations will have to deal with the waste produced by the nuclear industry. There is also a risk of catastrophic nuclear accidents and an increased risk of nuclear weapons proliferation. Large areas are still affected by the radiation released by the disaster at Chernobyl, and now they are proposing building new nuclear power plants in an area that is at risk from sea level rise.”

The protest at Sizewell is one of many nonviolent actions that have been organised by participants in the “Camp for Climate Action”, to draw attention to the dangers of climate change, and to highlight positive solutions to the problem. The site at Sizewell has been identified as one of a number of possible locations for new nuclear power stations in the UK. Sizewell hosts the most recently constructed civilian nuclear reactor in Britain, “Sizewell B” that began commercial production of electricity in 1995 following Britain’s longest ever public enquiry. 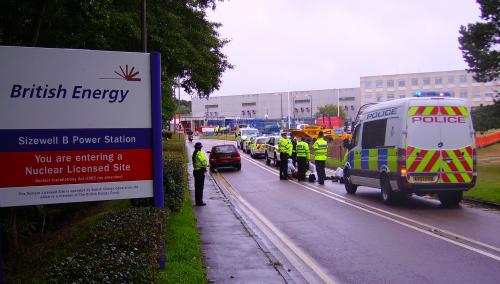 For those that really want some facts

There is plenty of information about the real costs to the planet of nuclear power. Apart from the dangers from accidents and nuclear weapons proliferation if you look at the whole lifetime of a nuclear power plant (including dealing with the waste - which we still haven't done for any of the nuke stations built so far) then its really NOT the answer to halting climate change.

For those that want to look a bit deeper try:

Theres lots of other informative websites:


Well done to those locked on at Sizewell today. An important link to make.

Just after 1:30 this afternoon, after six hours in the rain and with no sign of a cutting team in site, we decided to leave. We left without arrest and with all our tubes and equipment.

We will be back, to continue opposing the myth that nuclear power is any part of a solution to climate change.