US Hides the Truth on Cuban Five Case

"Someday the truth will prevail; meanwhile, we must persevere in our struggle to make the case known," 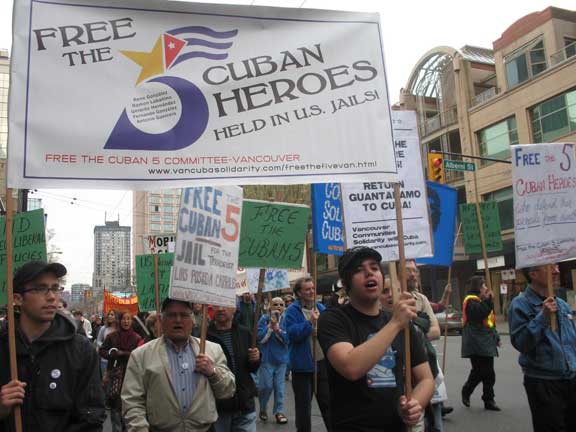 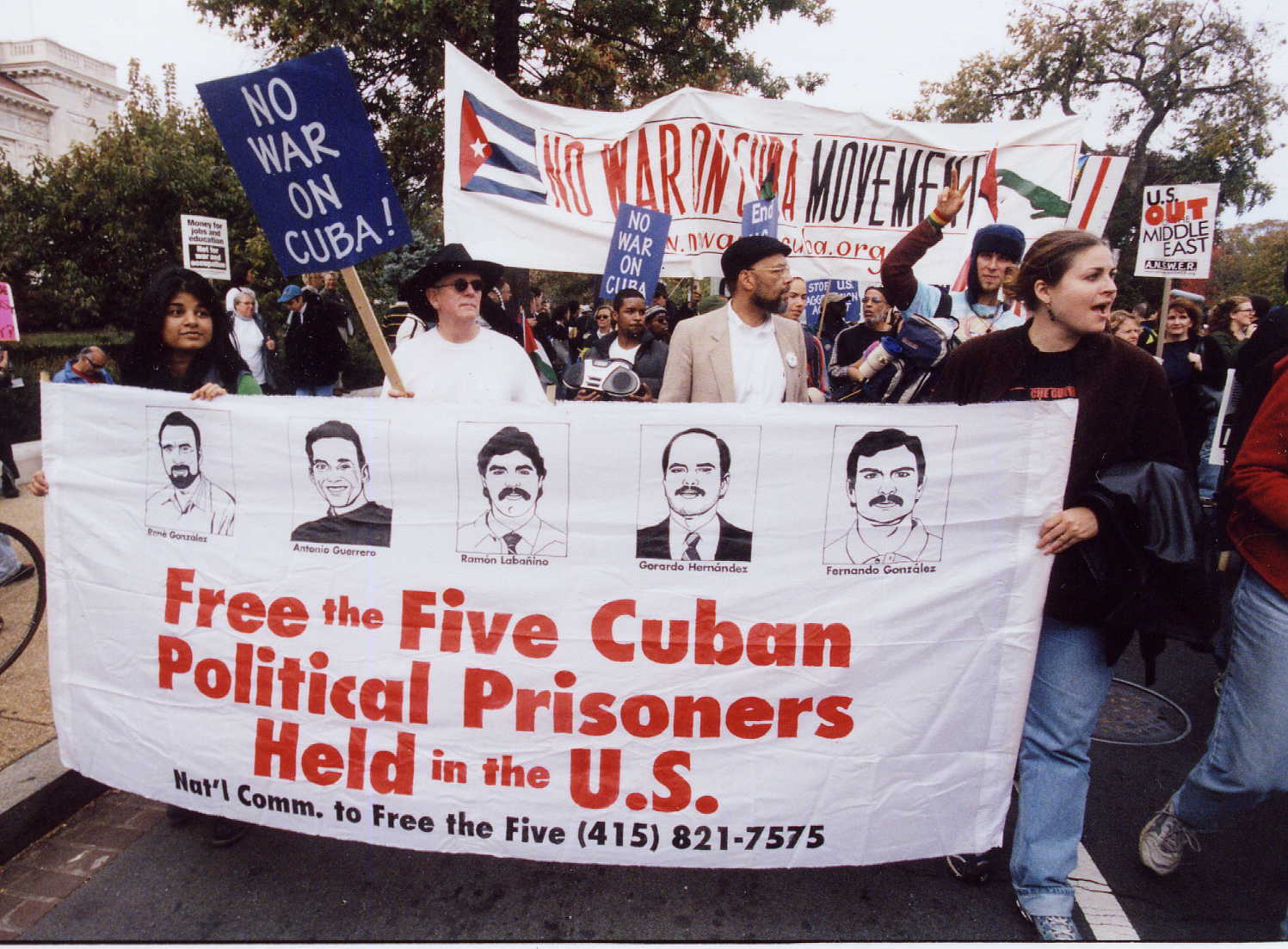 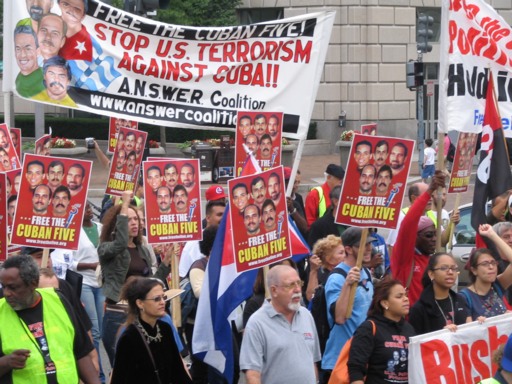 US Hides the Truth on Cuban Five Case

Cuban Parliament President Ricardo Alarcon said Wednesday in Havana that Washington is hiding the truth about the trial and appeal proceedings in the case of the Cuban Five, unjustly incarcerated in US jails for nearly nine years.
Alarcon spoke on the subject during the launching of a magazine of the Organization of Solidarity with the Peoples of Africa, Asia and Latin America (OSPAAL) dedicated to the five Cuban men. He pointed out that case clearly demonstrates the support the White House has given Florida-based terrorist groups.
Although Alarcon emphasized that to some extent the wall of silence has been broken on the irregularities surrounding this case, he added, "We are still far from achieving full public awareness of what occurred."
Alarcon said that two other recent trials constitute, at the same time, proof of the US government’s political manipulation in this case and of its hatred toward Cuba.
In one of them, an Iraqi citizen living in Chicago, accused of being a member of his country’s intelligence service and of allegedly watching the activity of exiled Iraqis in the United States, was sentenced to three years and ten months in prison.
This contrasts with the 15-year sentence imposed on Rene Gonzalez, one of the Cuban Five, against whom a similar charge could not be proven. Gonzalez was only trying to prevent terrorist actions against Cuba.
In the second case, an Indonesian citizen, whom the FBI said had in his possession 736 secret documents belonging to the White House, the Pentagon and the State Department, and whom it accused of espionage, was sentenced to a ten-year prison term.
Meanwhile, three of the Cuban Five were given life sentences, despite the fact that the prosecution did not present any evidence against them or any witnesses that could say they were spying on the US government.
Apart from this, a series of violations of US laws has characterized the case from the moment the Cuban Five were arbitrarily arrested on September 12, 1998, Alarcon said.
He pointed out that initially they were placed for 17 months in "the hole," a special unit of solitary confinement, although the law stipulates a maximum of 90 days and only in cases of highly dangerous detainees.
Alarcon noted that among the many irregularities that have taken place in this case are the refusal to give the defense team access to documents relating to the case; the addition, seven months later, of the charge of first-degree murder against Gerardo Hernandez without providing any evidence; and the refusal to hold the trial outside of Miami.
Alarcon cautioned not to expect anything from the hearing to be held on August 20, in which only 30 minutes will be allowed to the defense and the prosecution for their arguments. He also noted that the panel of judges has no time limit to rule on the appeal.
The Cuban parliamentarian said that the decision to ban the five Cubans —once they have served their sentences ranging up to two life sentences— from the areas where the terrorist groups carry out their is proof of the official protection the US affords to terrorism.
"Someday the truth will prevail; meanwhile, we must persevere in our struggle to make the case known," concluded Alarcon.

Once again, the United States fails to keep its promise in the war on terrorism

It was just a question of time. The “legal” contrivances worked. It confirms that anti-Cuba terrorism fomented in Miami is not a question of history. Osvaldo Mitat was released on Thursday, August 16 after 22 months in prison. He did not complete the sentence handed down to him for illegal possession of weapons, meant for attacking Cuba.
He and Santiago Álvarez Fernández-Magriñá, notorious terrorists, charged with possession of weapons and explosives in the United States, had cut a deal for “cooperation” with prosecutors, who described them as “freedom fighters.”
In 2005, both of them were aboard a boat, the Santrina, which was used to illegally bring another notorious terrorist into the United States: Luis Posada Carriles.
On Thursday, a southern Florida TV channel rejoiced at the news, and Mitat himself said on camera that his friend Santiago would be out soon.

IF the courts continue to be this complacent, Francisco Antonio “El Panzón” Chávez Abarca, the main accomplice of international terrorist Luis Posada Carriles in El Salvador, now being held for being the chief of a car-theft ring, is soon to be released, so that he can once again disappear out of the reach of justice.
Mirian del Carmen Urbina, a worker at the Transport Protection Division of the Salvadoran police, and three criminals linked to the gang of thieves were just released by a court in San Salvador, after a lightning trial in which the judge abstained from considering most of the evidence collected during the police investigation.
A few days ago, Chávez Abarca himself was able to stay out of those proceedings thanks to a last-minute strategy when he announced to the court that he had rejected his lawyer and that his new defense attorney would have to “study” the entire file.
The gang’s chief was then separated from the trial that was about to start, so that another court could try him.
Chávez Abarca is a Salvadoran bandit who Luis Posada Carriles used as his right-hand man during a series of attacks that he masterminded in Havana in 1997. He was never charged in his country for his complicity in this campaign of terror, which he not only contributed to organizing, but also personally traveled to Havana to carry out two of the attacks.

A LIGHTNING TRIAL FOR THE “CAR-THIEF” TERRORIST

The four defendants formally linked to Chávez Abarca and his gang were absolved by the 3rd Sentencing Court.
According to statements by one of the prosecutors in the case, “who declined to give his name” to the newspaper La Prensa Gráfica, the court did not completely consider evidence such as receipts for vehicle sales.
The trial was set to last three days with testimony from 40 witnesses. It did not last even one day.
According to the press report, the gang legalized their thefts with documents from cars out of circulation.
The defendants were charged with having run a warehouse on property in the Escalón neighborhood for luxury vehicles stolen from various Central American countries.
They were all facing charges of aggravated fraud and falsification of documents from stolen vehicles, which were legalized by customs agents and police officials to then be sold as if they were legitimate vehicles.
Chávez Abarca made three trips to Cuba in April and May of 1997.
He was the person who placed the first bomb that went off in the bathrooms of the Aché discotheque in the Hotel Melia Cohiba on April 12, 1997.
Even more seriously, Chávez Abarca was the individual who hired Ernesto Cruz Leon and convinced him to carry out terrorist missions abroad, giving him training on making explosive devices and directing him in the attack that later caused the death of a young tourist, Fabio di Celmo.
Francisco “El Panzon” Chávez Abarca, the son of a notorious weapons-trafficker, dedicated himself to drug trafficking in the 1990s, as well as weapons sales and counterfeit money. Via this business, he had dealings with Posada, gradually becoming his confidence man in the terrorist operation organized and financed by the paramilitary wing of the Cuban American National Foundation.
Everything indicates that the terrorist will now appear before a judge and invoke this most recent court ruling to demand his own release. To date, Salvadoran legal authorities have completely ignored his complicity with Posada Carriles, the international terrorist that the Central American country provided refuge to for years.

PANAMA, August 14 (PL).—The revelation by Colombian former soccer player Freddy Rincón that ex-President Mireya Moscoso suggested that he invest funds in a business to launder money from drug trafficking hit the headlines in the Panamanian press today.
In spite of a refutation by her lawyers, the La Prensa, Panamá-América, La Estrella de Panamá and Critica dailies, with the largest circulation in the country, have reported Rincón’s charge, covered in Colombia by RCN and El País.
Rincón is in prison in Brazil, awaiting the result of an extradition application by Panama for his alleged links with money-laundering via a company called Nautipesca, owned by Pablo Rayo Montaño, a Colombian drug trafficker.
According to the RCN investigation, Rincón informed the Brazilian justice system that Rayo Montaño had advised him to invest in Panama, a proposition subsequently put to him by Mireya Moscoso, who was president of Panama at the time.
The Panamá-América daily reports that: “Priscilla Reyes, Rincón’s wife, confirmed a telephone conversation between the former soccer player and Moscoso and a meeting both had in a Panamanian restaurant.”
Reyes said that Rayo Montaño was a business executive, part of the (Moscoso) government and even had a Panamanian identity card.
The ex-president stated in a press release that this was the second time that rash information without any substance had been published trying to establish some kind of link between her and the former soccer player, Colombian Freddy Rincón.
Translated by Granma International

http://www.bbc.co.uk/worldservice/ondemand/rams/nh27166____2007.ram BBC interview with Gerardo Hernández, one of the Cuban Five. Or read it at the site of: