A group of around 30 from the Climate Camp, including many from No Borders, made their way (with an un-necessary police escort) to Harmondsworth Immigration Detention Centre at midday on Tuesday, only to be forcibly penned by police into a car park invisible to the road. The action was to highlight the link between detention centres and climate change, and to show solidarity to those inside, detained for committing no crime. 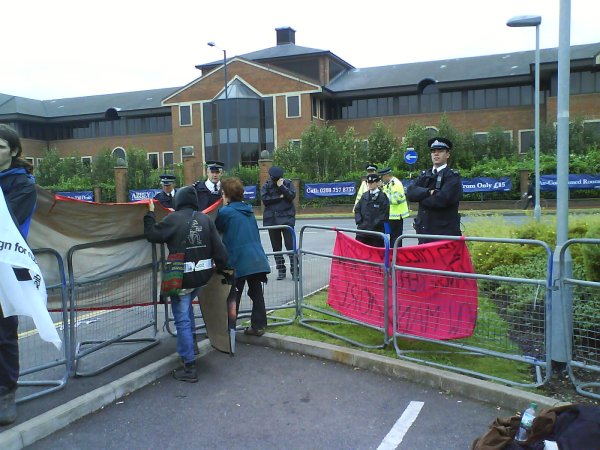 It was a cruel and demoralising irony: here we were in a pen made from those steel fences used in crowd control, our protest – about wrongful detention – itself detained. The police outnumbered us, surrounding the pen. It took much spirit to get our chants going, but with the welcome arrival of a mic and speaker from Bicycology, we had a good go at “NO BORDERS! NO NATIONS! NO DEPORTATIONS!!”.

A woman from No Borders managed to get one of the detainees on the phone, so that even though they may not have been able to hear us (we were quite far from the buildings), people inside knew we were there. A few people spoke, recited poems and sang songs. Most memorable was a heart-wrenching Bengali song, which – the singer explained as she translated into English for us, would be understood by environmental refugees from Bangladesh inside.

The link between the Climate Camp and detention centres is in no way convoluted. Climate change is already producing millions of environmental refugees. These millions will become hundreds of millions in a business as usual scenario. Many of those refugees managing to flee to this country, along with many fleeing torture and war, are met not with compassion and asylum, but brutal repression and detention. The policies of UK plc with regard to climate change are hurting these people, but instead of helping them, UK plc locks them up.

When we arrived at the detention centre we stopped to have a meeting characteristic of the direct democracy in action back at the camp. Just as the first proposals were being made, the police stepped in quoting the much abused Highways Act of 1859. We were of course blocking the highway, but mainly on account of being surrounded by a number of police greater than our own. A man asked a senior officer whether two people were allowed to remain on the pavement holding a banner. He was completely ignored, likewise was a woman who stepped up and asked the same. Then within seconds we were being pushed by the police into the pre-prepared pen they had made for us. Claiming that they were allowing us to protest, several policeman then made absolutely sure that we could not get our message across to anyone driving past by standing in front of our banners.

We left the detention centre before the start of visiting hours at 2pm to make sure that our protest wasn’t used by the police and security force at the detention centre as an excuse to withhold visits. Walking back, a few of us managed to give the now-obligatory-for-climate-campers police escort the slip. It was with an unease about the future that I felt joy at being allowed to walk down the road without being accompanied by the police. 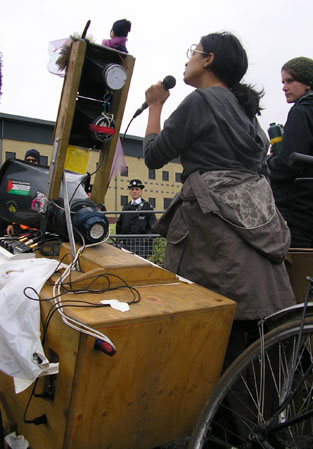 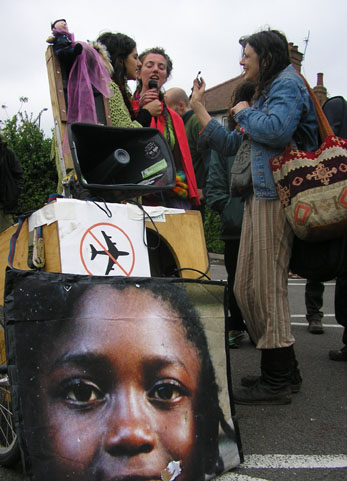 More singing being relayed by mike and mobile 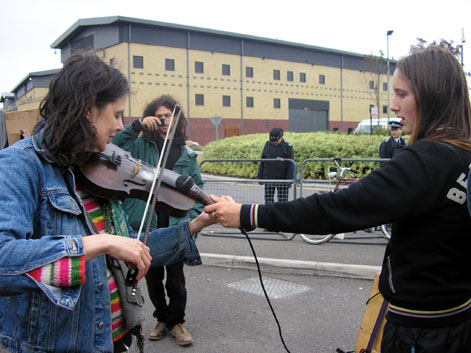 Serinading against an ugly backdrop