This podcast content a couple of interviews, general mood in BAA, Seize the day music and Rob Newman performance. 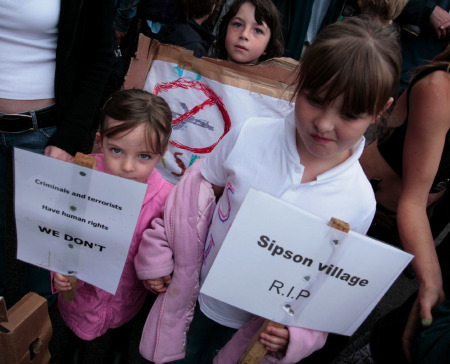 While waiting for the train to Hayes and Harlington at Paddington station I saw a familiar face, a girl with dread locks and camping gear. we smiled and said hello to each other. she was taking the Oxford train that was leaving earlier, we followed her.


When we got out of the bus in a quiet suburban area I immediately relaxed, the London chaos was behind and a friendlier more peaceful atmosphere welcomed us
after few minutes walking on the light of the clear night we could see the white tents of the camp and hear our people singing, the rows of policemen standing by the road didn't matter, the sense of purpose produced by being part of something big was stronger than anything.

At the camp "Seize the day", my favorite band, where performing in the main tent we listen to them for a while but had to go to set up our tents

The next day my friend was going to lock herself to the gate of Carmel, an Israeli company that imports fruits and vegetables from Palestinian illegally occupied land,
more info at (

http://www.indymedia.org.uk/en/2007/08/378741.html) a peaceful protest in front of this company had been arranged with climate campers to
rise awareness about this company's unfair trading and disregard for climate change issues.

The protest went ok apart from each one of us being searched by police under section 60 and about 6 young people arrested for getting into the company's office and creating some chaos.

That night at the camp Rob Newman performed his activist political stand up. Next day was the big march when everyone was going to march to Sipson village and then to BAA.

We some training on de-escalation techniques to avoid violence with the hundreds of police surrounding the camp but only few of us managed to succeed on crossing the different lines of police on horses, normal police on foot and riot police. They were taking no chance, they were determined to stop us at any cost.

The atmosphere at BAA was a happy one, lot of young people singing and bonding together in the exercise of their right to free expression.