Italy declares to be available to receive Pegah, granting her asylum. Roberto Malini, Matteo Pegoraro, Dario Picciau and Steed Gamero of the EveryOne Group have yesterday met the agents-general of the United Kingdom at the British Embassy in Italy.
"The First Minister Gordon Brown is paying particular attention to the case of the Iranian refugee", they have assured, “and we're approaching the case with a solution that respects the conventions for the Human Rights". 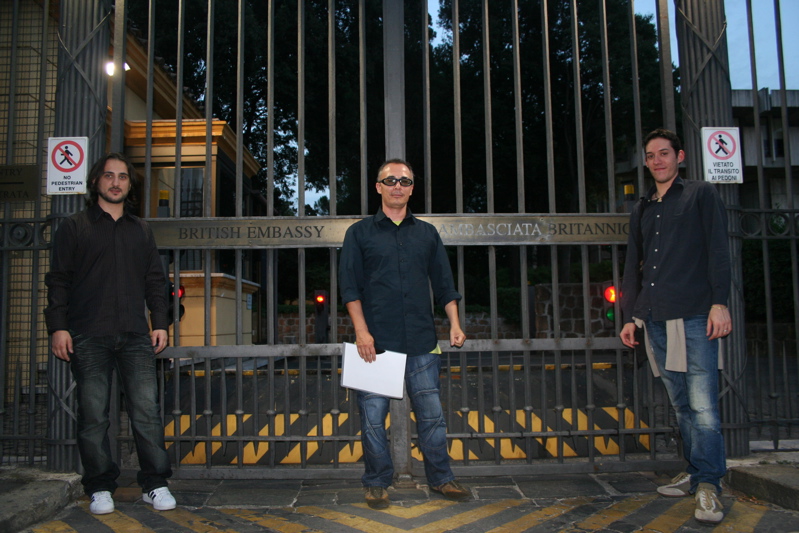 Rome, 25 August 2007.
Italy declares to be available to receive Pegah, granting her asylum. Roberto Malini, Matteo Pegoraro, Dario Picciau and Steed Gamero of the EveryOne Group have yesterday met the agents-general of the United Kingdom at the British Embassy in Italy.
"The First Minister Gordon Brown is paying particular attention to the case of the Iranian refugee", they have assured, “and we're approaching the case with a solution that respects the conventions for the Human Rights".

The EveryOne Group has provided to the English government some important documents, including a sentence to death emitted and published from the Islamic Republic of Iran regarding Pegah Emambakhsh.
Moreover, for who doubted of the fact that Pegah is lesbian, some letters of lesbian women who live in Iran that testimony the
refugee is subscribed to the GLBT locate community, obviously a clandestine community.

In the meanwhile Barbara Pollastrini, Italian Minister for Rights and Equal Opportunities, after she joined to the appeal of the EveryOne Group, has promoted the plan to receive Pegah in Italy and her initiative has been already undersigned by important political personalities: the firsts to join have been the Minister of Social Solidarity Paul Ferrero, the Minister for the Foreign Affairs Emma Bonino and the Minister of Justice Clemente Mastella. The Mayor of Venice Massimo Cacciari has already found a house for Pegah. The Mayor of Rome Walter Veltroni asks for being able to receive her in the capital city of Italy. The Members of Italian Parliament Franca Bimbi - President of the Committee on EU Policie - and Franco Grillini joined the appeal of EveryOne Group and the proposal of Barbara Pollastrini.

In the meantime, in UK, an important legal office has decided to defend pro bono the Iranian lesbian, so that she receives the asylum she has the right to receive.
Italy, has explained the vice-minister for Foreign countries Patrizia Sentinelli, has activated “all the diplomatic channels" in order to convince London not to deport the woman to the Iranians authorities and “has founded hopes that this initiative goes for good. If Pegah at the end will be expelled, we will be ready to receive her”.

The mobilitation in favour of Pegah, promoted from the EveryOne Group, collects an increasing and cross-sectional consent to the political coalitions.
Also Forza Italia - through the voice of the vice-coordinator Fabrizio Cicchito - declared to be favorable to receive in Italy the woman. Ds, Greens and Italian Radicals today have joined to the sit-in of monday afternoon in front the British embassy in Rome promoted from Arcigay, Arcilesbica and from the EveryOne Group, that it will introduce to the press and the authorities copies of the international norms that regulate the asylum and some European sentences of people that in the same conditions of Pegah have obtained asylum. Emblematic sentences in order to eliminate the chaos that regards the application of the norms of the Conventions and finally to define a common directive, focused to the respect of the Human Rights and not to non homogeneous decisions, often contradicting each other, case by case.
Photo, from left: Dario Picciau, Roberto Malini and Matteo Pegoraro (EveryOne Group) after the meeting with the British Embassy