There will probably be police photographers outside the meeting, don't be intimidated.
You might choose to wear a scarf in this unpredictable weather. 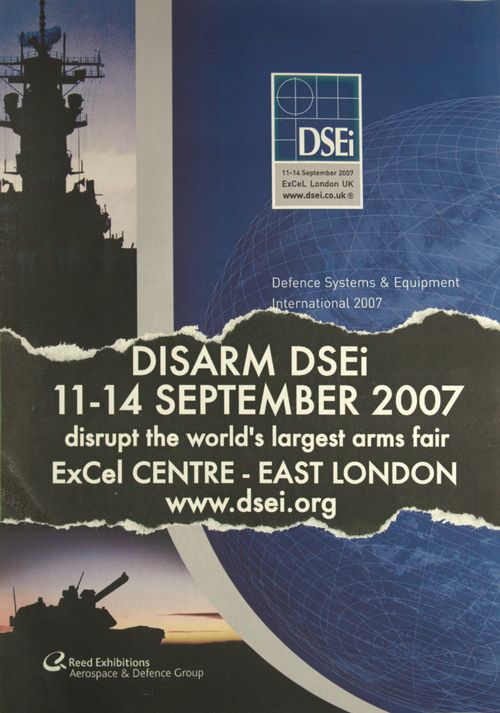 From 11-14 September, Defence Systems and Equipment international, the world's largest arms fair, returns to East London's ExCeL Centre. Despite massive local opposition, and a huge bill to the taxpayer, arms dealers will once again be free to deal in death and destruction.

`Stop the War' (whichever war) is useless sloganeering unless it is accompanied by a commitment to stopping the global arms trade. War will never stop whilst weapon sales are a booming capitalist business worth in the region of $40 billion a year. There are no borders, no limitations and certainly no morals when it comes to arms trading. Whilst countries such as the US and UK pretend to restrict the sale of arms, there are enough loopholes to enable dealers to trade whatever they like, to whoever they like.

In 2005, DSEi hosted 1,200 companies, 70 official military delegation and 20,000 visitors from across the globe. Many of the countries invited were at war, some with each other. Many were dictatorships with appalling human rights records. Many had huge national debts with populations in severe states of poverty and starvation. We must not let them meet without disruption and opposition. Join us and take action. Say no to war. Say no to the arms trade.

There were 1,201 exhibitors at the last DSEi. Find out where is your nearest (see www.dsei.org for further information). Take action and say no to death and destruction on your doorstep.